Rainbow stag beetles have shiny, rainbow-colored metallic backs that make them look amazing. Read on to learn all about them in the article below.

Having a pet takes a lot of hard work and sacrifice. You constantly need to take care of them to make sure that they are healthy, which is why some people consider it a hassle.

But some pets are easy to keep, and they require the least amount of attention from your end to stay healthy.

One such pet is the rainbow stag beetle. These insects are known for their shiny rainbow-colored bodies that give a cool robotic appearance.

Since they are rare, collectors and beetle breeders love to keep them as pets.

Do you want a rainbow stag beetle as your pet? If yes, then this article will help you understand the insect better.

It will also list all the requirements and tips you will need to keep them healthy and happy.

What Are Rainbow Stag Beetles?

They are one of the most beautiful stag beetles in the world. They are a wildlife icon in Australia and were earlier endemic to rain forests of Queensland.

Breeders from Japan took this species to their country, and soon the population started flourishing there as well.

Beetle enthusiasts from different parts of the world love to keep these insects as pets.

Rainbow beetles have shiny metallic bodies with red, blue, and green colors. They have a pair of wings like other stag beetles but are considered lazy fliers.

You should know that these insects lose the shine of their body once they die. This makes it difficult to photograph dead and preserved rainbow stag beetles.

They do not have strong chewing muscles, which makes their bites less dangerous compared to the other species of stag beetles scattered across the globe.

You can identify these insects by their shiny armor-like bodies that make them look like tiny insect robots.

They are not aggressive towards humans and pets. These insects rarely attack humans.

People get the wrong impression about them because of their huge antler-like mandibles, but these are almost never used for biting.

The beetles use them to woo the females and to get food.

As mentioned above, these insects are not aggressive toward humans and pets. In rare cases, they might try to bite you.

If you want to avoid the bites, try wearing safety gloves while touching and picking them up.

These beetles can bite on rare occasions, but thankfully the bites are not too painful.

The mandibles are not strong enough to break past your skin and cause bleeding. Adding to that, these beetles are not poisonous.

Where Are They Found?

Rainbow stag beetles are a star attraction in Australia. The rainforest of Queensland serves as the ideal spot for them to thrive.

During the summer months, you can often see them in the bark of rotten cedar trees.

Due to the increase in popularity as pets, the Japanese started breeding them, and soon enough, a significant population of rainbow stag beetles now resides in Japan, mainly as pets.

They can easily survive in rainforests with an abundance of dead and rotten wood.

The adults also eat decaying wood and other things like fruits, nectar, and sap.

It can be a little difficult to differentiate between males and females at first glance. But if you look closely, you will notice that the male rainbow stag beetles are bigger than the females.

The males can grow up to around 3 inches, and the female is around 2 inches in length.

Males have bigger and stronger mandibles, and they often use them to impress females and to win fights for mating rights.

The females have a distinct line running down their heads. This makes it easy to identify them.

Rainbow stag beetles are perfect pets. The main reason behind this is the fact that they don’t need a lot of attention from your end to thrive.

Adding to that, they can easily live for around two years in captivity.

Plus, they are lazy fliers, and you don’t need to worry about them flying away and escaping. Here are a few tips and tricks to take proper care of these beetles as pets.

Making a Home For Them

Once you get these insects, you need to create a good home for them. Use a big tank that allows these beetles to move freely.

Fill the base of the tank with a thick layer of peat and soil mixture. Make sure the layer is deep enough for the beetles to burrow into.

Unlike the other species of stag beetles, these insects can be kept together, but continuous mating can cause exhaustion. Separate the male and female for a while after mating is done.

You can feed them slices of bananas, apples, oranges, and more. Put them all on a sauce plate and keep them in the tank.

This will prevent the tank from getting dirty, and it will be easily cleaned. Keep removing the leftovers as mold will grow on them.

To avoid this problem, you can feed them beetle jelly. It is highly nutritious and has good longevity.

Keep the male and female in the same tank for mating. Once that is done, transfer the female to a separate tank with a thick base of loose soil.

Add food sources like rotting tree branches, logs, and fruits to the tank.

To breed these insects effectively, keep the 3rd female instar larvae at 72 degrees F to extend their growth and the male larvae at 79 degrees F.

Handling The Eggs and Larvae

You must be careful while touching and handling the larvae. Do not drop them, as it might kill the grubs.

Do not disturb them during the pupation period. Also, ensure that you hold them from the thorax; their legs are fragile and can snap.

Rainbow stag beetles are quite rare. Earlier, these insects were endemic only to the rainforest regions of Queensland, Australia.
Later Japanese breeders took them home and started breeding them there as well. And surprisingly, a new population thrived and emerged in Japan as well.

No stag beetles are not poisonous; they are gentle and non-aggressive towards humans and pets.
However, in rare cases, these beetles can use strong mandibles to deliver painful bites. The bites cause problems like swelling, bleeding, redness, and irritation.

Rainbow stag beetles can easily survive for up to two years in captivity. The adults here are comparatively long-lived than the other species of stag beetles.
These insects can easily live for around 18 months in the wild as well.

How much do Rainbow Stags sell for?

Rainbow stag beetles are exotic insects that people love to have as pets. These insects are a joy to watch and are low-maintenance.
After the rise of their populations in Japan, an average adult rainbow stag beetle can cost around 70 dollars.
The price was much higher when they only existed in Queensland.

Rainbow stag beetles were only found in the rainforest regions of Queensland, Australia, but the Japanese have managed to breed a population of them in their country as well.

Despite the metallic robot-like appearance, these insects are completely harmless to humans.

In fact, their bites are not as painful as the other stag beetles. The bites won’t cause bleeding.

Keeping them as pets is very convenient as they can adjust to almost all kinds of weather.

Use the tips and tricks mentioned in the article to keep them healthy as pets. Thank you for taking the time to read this article.

Rainbow stag beetles are a sight to behold. These shiny, rainbow-colored insects make for amazing pets, and in the wild, their huge mandibles stand them apart from others of their kind.

One of our readers who spotted one of these bugs near their homes had sent in photos asking us to identify them. Read on to see the pictures and some of the comments as well. 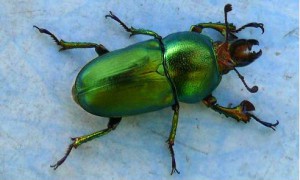 3 thoughts on “Rainbow Stag Beetle: The Most Beautiful Beetle In The World”