Paper wasps are a marvel of engineering in terms of the waterproof paper nests they create. Let’s understand the life cycle of paper wasps to know all about how they do it!

Wasps are indeed among the most interesting members of the insect world, especially the social ones. If these social insects intrigue you, you’ll love reading this article.

Of course, there are too many species of social wasps to cover in one article – 700 worldwide and 20 in North America.

his article will explore the life cycle of one of the most common North American social wasp species – the paper wasp.

You should note that while these wasps are also found in Europe, the European counterparts are smaller and have more prominent black and yellow markings.

How Long Do Paper Wasps Live?

Female (queen) paper wasps live for about a year, which is the time taken by them to mature and reproduce.

The larvae that hatch from their eggs in summer go through several instars before they pupate into adult wasps.

The sterile worker wasps in the colony constantly work on finding food so that these larvae remain well-fed.

Before the end of the season, the queen selects some of the females to be her successors. It is believed that she passes on some types of pheromones to them.

The chosen few females and the queen hibernate, while the rest of the colony dies during the winter. Some of them survive the winter and grow into new queens.

But the remaining males and workers live only for a few months, from summer to fall.

Let’s learn more about each stage of their unique and interesting lifecycle in more detail below.

Most of the paper wasps in a colony cannot survive the winter and die during these cold months.

The females often spend the winter in protected hiding places like tree bark, empty spaces in a hollow tree, and cracks and crevices in structures.

In spring, these fertilized females emerge again and work together to build a new nest.

It’s worth noting that one of these females becomes dominant over the rest and serves as their queen.

All the females then lay eggs in the nest, which eventually grow into new males and workers.

Have you ever wondered how paper wasps got their name? Well, it’s because they construct their nests using a paper-like material prepared from wood pulp.

They scrape wood fiber from trees or other wooden surfaces and chew it, mixing it with their saliva to create the pulpy material.

You should note that while baldfaced hornets and yellowjackets build their nests using a similar technique, theirs are closed.

A paper wasp nest is easy to identify due to its open-comb (umbrella-like) design.

The females lay one egg in each cell of the nest. These cells shelter the wasp larvae until they’re mature enough to pupate.

Where Do They Make Their Nests?

In nature, woodlands and savannas are the ideal habitats for paper wasps.

However, they’ve become quite common around human habitations, especially where they have access to exposed wood and food sources.

As mentioned earlier, larvae hatching from the eggs live in the safety of their cells until pupation.

During the larval stage, paper wasps go through a process called molting, where they outgrow their skin, grow a new one, and shed the old skin.

Each successive stage is called an instar.

After five such instar stages, the larvae are ready to pupate. They spin a cocoon around themselves, blocking the entrance to the cell.

It takes them about a week to finish pupating.

Like most wasps, nectar serves as the main food source for the adult wasps of this species.

However, they do hunt caterpillars and other insects to feed their larvae. Through a process called malaxation, they soften the food and absorb the liquids.

The solid portions of the food are then fed to older larvae, while the younger larvae receive the regurgitated liquid.

The End Of The Colony

Paper wasp colonies last only until around fall, when the workers and the males start to die along with the older generation of females.

With the death of the current queen, a colony loses its social structure.

By late fall or winter, the entire colony would be dead. The new females leave the nests before this happens, mate with males, and overwinter somewhere safe until winter has passed.

How long do paper wasps stay in their nest?

Female paper wasps stay in their nest from spring to fall, i.e., since they start building the nest until the fall when they die.
The workers and the adults have a shorter stay since they don’t hatch before summer.

Do paper wasps reuse their nests?

Paper wasps never reuse old nests – they always build new ones from scratch. However, they often have favorite nesting sites that they choose every year.
This is why, when you get rid of a paper wasp nest, you should watch out for a new one at the same spot in the future.

Do paper wasps build a new nest every year?

Yes, paper wasps always build a new nest every year. As mentioned earlier, a new generation of females works together to start building the nest in the spring.
Once new worker wasps from their eggs mature, they aid in building and expanding the nest too.

Do paper wasps leave their nests in winter?

You may have noticed that paper wasp nests are empty in winter. This is because most of them (the workers, males, and older females) die around this time.
The new females survive, but they leave the nest and take shelter in protected places inside structures or among organic debris.

If you come across a paper wasp nest on your property during late fall or winter, it’s likely empty anyway. Even if it’s an active nest, you may leave it be unless it’s dangerously close to areas of human activity.

After all, the paper wasp is a beneficial insect that aids in pest control. I hope you enjoyed reading this article and it has cleared up all your questions regarding the life cycle of a paper wasp.

Over the years, many of our readers have inquired to us about what paper wasps feed to their young and how long they take to convert from the larval to adult stage.

Read through some of these emails below. 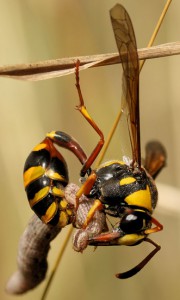 aussietrev wasp foodchain pic
Thu, Apr 16, 2009 at 7:08 PM
Hi guys,
Walking along and this wasp came buzzing out from a small shrub and landed on a grass stem to finish off this caterpillar, which I think is one of the Geometridae. Taken in the Capricornia region of Queensland.
aussietrev
Qld, Australia

Hi Trevor,
We believe this is one of the social Paper Wasps, possibly Polistes tepidus, and we also believe it has captured the caterpillar to feed to larval wasps back at the nest.  The Brisbane Insect Page has photo documentation of a Polistes Paper Wasp skinning and “packaging” a large caterpillar into manageable portions for travel.  It states:  “The wasp cut a large piece from the caterpillar and carefully pack it into  ball shape for easy carrying. Then she started to fly back home to feed their  larvae. We noticed that the wasp circle around over the caterpillar body a few  time before she disappear. We believed she did that to recognize the location  so that she could come back after deliver the meal.”  Perhaps one of our readers can substantiate this. 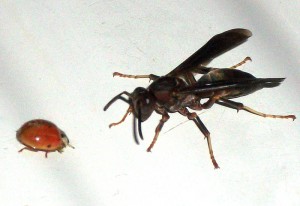 Standoff on the Kitchen Sink
Location:Tennessee
March 2, 2011
Hi Daniel and Lisa,
Hope this finds you both well.
This afternoon there was a little drama in my kitchen…Lady Bird Beetle is still there, the Paper Wasp has left the building (well…the area).
My question is, was it the pungent odor of the “Ladybug,” or just no real interest on the part of the wasp that caused an end to the standoff?  They danced around and around for nearly two hours without moving more than an inch in any direction.
Spring is springing up here in the Great Smoky Mountains of East Tennessee.  YES!!!  Even the moths have begun their nightly flights.
More later, to be sure,
R.G. Marion

Hi R.G.,
It is nice to hear from you again.  While this meeting may appear confrontational, we suspect it is just a matter of a chance meeting.  Paper Wasps are nectar feeders that feed their larvae chewed and regurgitated insects, but the usual prey includes soft bodied insects like Caterpillars. 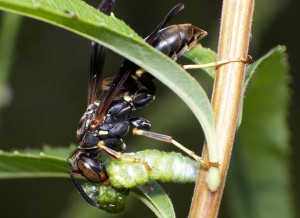 Paper Wasp skins, preps Caterpillar for larvae
Location: Clarksburg, MA
August 1, 2011 10:51 am
Hello! I noticed the Golden Paper Wasp post, and that you mentioned how the wasps feed caterpillars to their young. I just happened to be photographing bugs yesterday and I caught what I believe is a Common or Northern Paper Wasp (Polistes fuscatus) already in the process of skinning a caterpillar. In the first picture, you can see it’s chewing/cutting off the head and thorax regions, which eventually were totally severed and fell to the ground. It then started chewing and balling up what was left. I was a little confused, because I thought it was actually eating the caterpillar, but your other post clarified that they chew ’em up for the kiddies. Thought you might like a couple pics. Enjoy!
Signature: Michael Marlow

Hi Michael,
What wonderful photographs you have supplied to us of a Northern Paper Wasp skinning a Caterpillar in support of the information we just posted on the Golden Paper Wasp.

4 thoughts on “Life Cycle Of Paper Wasp: How Long Do They Live?”