There are two very common pests in North American homes in the summer and spring seasons. In this article, we compare the elm seed bug vs box elder bug.

Few things are more frustrating than finding your home taken over by nuisance pests.

Especially with the arrival of the warm weather, box elder bugs and elm seed bugs are a common sight in homes.

The two pests are similar in several aspects, and homeowners often find it challenging to distinguish them from each other.

If you came here trying to find out more about how they differ, rest assured that you won’t be disappointed.

What Are The Similarities?

Elm seed bugs and box elder bugs are quite similar in several ways, which we’ll quickly go over:

What Are The Differences?

So, how can you differentiate between an elm seed bug and a box elder bug? Here are a few ways in which the two bugs are different from each other:

Although the two bugs are somewhat similar in appearance, you can spot the differences if you know what to look for.

Firstly, adult elm seed bugs grow up to only a third or a fourth of an inch, while box elder bugs can grow two inches long.

Box elder bugs have bright red or orange outlines on their backs. On the other hand, elm seed bugs have alternating red and black stripes just outside the wings.

As the name suggests, elm seed bugs prefer to live and feed on elm trees besides linden and oak.

You’ll find boxelder bugs mostly on boxelder, maple, and ash trees. You can differentiate between the two bugs based on where they’re coming from and the trees around your home.

The time of the year is a potential indicator too. In case the bugs are infesting your property, and you notice their nymphs as early as May, they’re likely elm seed bugs.

Box elder bugs don’t come out so early; you won’t usually see them until late summer.

How To Control Them?

Due to how fast both these bugs reproduce and multiply, you may not be able to get rid of them completely. However, you can control the number of elm seed bugs and box elder bugs on your property through the following means:

If it gets too bad, you might have to contact a pest control company and get them to carry out professional treatment.

Are elm seed bugs the same as boxelder bugs?

Although elm seed bugs and boxelder bugs share several similarities and can be equally troublesome, they aren’t the same species.
They are two different types of insects, with several differences to distinguish them from each other.

No, if the bugs on your property are coming from elm trees, they’re likely elm seed bugs.
Box elder bugs mostly live on box elder, maple, and ash trees. You won’t find them on elm trees.

Although box elder bugs have a relatively unique appearance with their markings, they do share similarities with a few other bug species too.
Kissing bugs, elm seed bugs, and conifer seed bugs look like box elder bugs and are often confused with each other.

Elm seed bugs have a flat and elongated oval-shaped body, growing up to 1/3rd or 1/4th inch long. While the dorsal side of the body is dark brown, the abdomen is red on the underside. You’ll also notice alternating patterns of red/orange and black strips on the sides of the body.

If you’re unfortunate enough to have an infestation of elm seed bugs or boxelder bugs in your home, remember not to squish them.

It will only cause them to release a foul odor and make your home smelly. In case these bugs are very common in your region or you start noticing them, take preventive measures immediately.

Remove dead elm and boxelder tree trunks, keep your yard clean, and leave no entry points. Taking these steps early on will save you the hassle of dealing with the infestation later.

These two bugs are so similar that many of our veteran readers also get confused between them.

Over the years, we have got the same query several times, and we wanted to share one of the discussions with you. Do go through for a quiet chuckle! 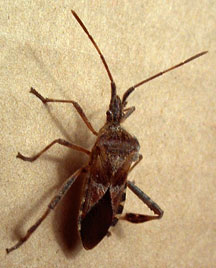 Hi Jim,
We know from your follow-up letter that you correctly identified both the Western Conifer Seed Bug and the Boxelder Bug from images on our site.

I kept poking around on your web site and I believe I have answered my own questions. It’s amazing how different the bugs can look while they are maturing. Your bug page had a half dozen samples of the same bugs at different stages, so I was able to make a match (I think!): image365 is a western conifer seed bug, and image368 is a box elder Am I right? Well, at least you have some more sample pictures now. Your web site is an excellent resource! Excellent work. Thanks,
Jim