Elm seed bugs are spreading quickly across North America, but where do they originally come from? Is elm seed bug native to Utah or some other state? Let’s find out.

Arocatus Melanocephalus, or what we know as elm seed bugs, are originally from Europe and the Mediterranean region.

They are not native to Utah or any other place in America.

These pests were once alien to the US, but since 2021, these seed bugs have become very common in a few parts of North America.

In this article, we will talk about a few places where you are likely to come across elm seed bugs.

Elm seed bugs are a type of insect found around elm trees in the wild.

Before this, the bugs were found in Idaho in 2012. They recorded the bugs’ first presence in Salt Lake County.

In North America today, elm seed bugs have been spotted around Oregon and Washington. In Utah, they can are found in Duchesne County, distributed around Tooele County and Cache County.

In recent years, adult elm seed bugs have become common in and around British Colombia, Canada, and several areas of Asia and Europe.

You can identify these bugs by their rusty-black color and the upside-down triangle design on their back.

The bugs also emit a foul odor when startled, which is another way people can find them.

The life cycle of the elm seed bug is still not quite clear in certain ways. A Utah State University Extension study briefly outlines how these bugs multiply and grow in the wild.

Elm seed bugs are active in late summer, appearing in the first week of June. They lay their eggs in elm flower cups where the nymphs hatch and start feeding on elm seeds.

The adult bugs overwinter as adults in wood piles and warm landscapes. When the nymphs hatch, they go through five stages of molting before evolving into adult bugs.

Each stage lasts about a week, and it takes them the entire summer till the fall to grow into their full adult bodies.

Only one generation survives every season, and they often overwinter to survive extreme temperature changes in Utah and surrounding areas.

What Damage Can it Do?

While there is not much scientific evidence about the damage caused by elm seed bugs, most homeowners know how much of a nuisance they are.

Putting aside the pungent, bitter almond-like odor that trails with the bugs, they can also damage wood and can accumulate in large numbers.

Elm seed bugs enter through cracks in walls and windows, especially in winter, when trying to find a warm place to hide.

An indoor infestation may send hundreds of nymphs or winged bugs lining a window pane. These winged insects can be very annoying for the residents, often landing on furniture and inside food.

In the summer months, when the bugs are very active around elm trees, you might see a swarm of these bugs circling your garden.

While they grow only one generation every season, they can be very difficult to eliminate in the summer.

How To Manage the Bug?

Elm seed bugs are nuisance pests that can cause trouble in your homes. To keep them under check, it is important to maintain cleanliness, vacuum regularly, and spray insecticides on elm trees near your property.

The bugs are small in size but easy to see. If you see some of them in parts of your house, start vacuuming those spots and dispose of them as early as possible.

You can also try to pick them up by hand and throw them out, but they will emit that foul odor, and it could leave you gasping for air.

If you have elm trees around your house, make sure to spray the trees or control the growth of trees to reduce the bug infestations happening every season.

Create a perimeter of insecticide around doorways and window frames. Most common insecticides work as repellants for the bugs and keep them away from entering your homes.

Where do elm seed bugs come from?

Elm seed bugs come from different parts of Europe and Asia. These insects can migrate from one area to another to escape temperature changes. While they are native to Europe, they have spread to many states in America and Canada in recent years, including Utah.

Where are elm seed bugs found?

Elm seed bugs are European pests. Since 2012, they have been present in large numbers in North America and British Colombia.

Elm seed bugs do not cause any harm to their host trees or the humans around them. They might, however, infest a tree for a season and enter houses near that tree.

Their infestation in your home can be quite annoying as they might sit on your furniture or end up on your food.

How do I get rid of elm seed bugs in my house?

Elm seed bugs can be managed with regular vacuuming, using common pest repellants, and sealing cracks in windows and doors.

You can also control these bugs by regularly pruning elm trees near your home. Insecticides such as lambda-cyhalothrin, cypermethrin, and permethrin will also work to control them.

Elm seed bugs are not the most harmful insects to be around. But they can be very annoying nonetheless.

If you are living in Utah, the best idea would be to seal up cracks in the walls and windows of your home during summer.

Spray a light pesticide around your house to keep the bugs outdoors. Thank you for reading, and look out for the elm trees in your backyard!

Despite the excitement that many of our readers from Utah had when they discovered this bug near their homes in 2014, it is not a native pest of their state.

Here are a few photos that some of them shared with us then and over the years. 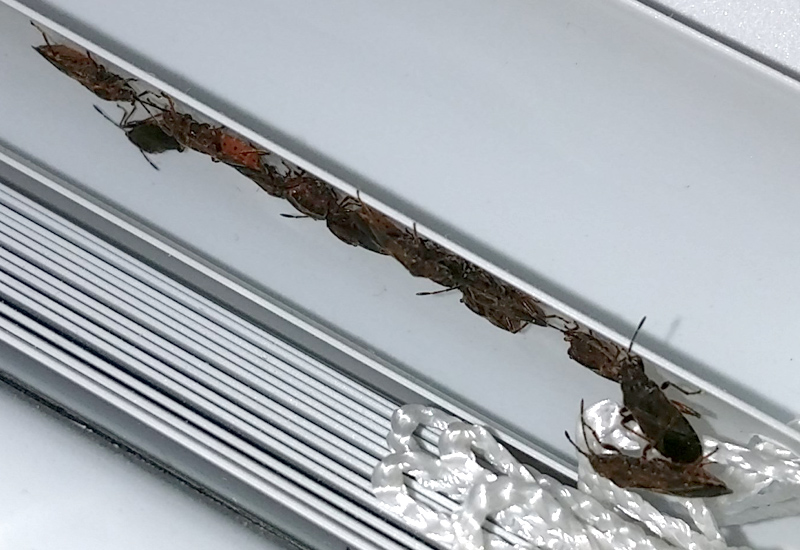 Ed. Note:  Because our previous posting of Elm Seed Bugs has received so many recent comments, we have decided to make the Elm Seed Bug our Bug of the Month for July 2015 and to post it live a few days early.

Subject: Invaders!
Location: Salt Lake City Utah
June 27, 2015 12:13 pm
We have these little buggers that we seem to keep finding on the back end of our home near the windows. I found a nest of them underneath one of the blinds in our bedroom window. They dont appear to fly. They are about 1/4 inch long. What are they? Do they bite? How can we get rid of them? Thanks in advance…
Signature: -Loyal WTB fan for 5+ years

Dear Loyal WTB fan for 5+ years,
It appears that you have an Elm Seed Bug, Arocatus melanocephalus, infestation, a nonnative species first reported in North America in Idaho in 2012.  As you must know, we do not provide extermination information, though we are sometimes freer when the species is invasive like the Elm Seed Bug.  There are currently numerous comments from readers on the first Elm Seed Bug posting in our archives, and you may find some help there.  According to Gemtek:  “Identification: Elm seed bugs are typically ⅓ inch long and are dark brown in color, with an abdomen that is reddish colored. Like a boxelder bug, their wings fold to form a thin X shape. Aside from color differences, elm seed and boxelder bugs look nearly identical.  Diet, Habitat, Life Cycle, and Habits:  Once again, elm seed bugs are similar to boxelder bugs in all of these aspects. A key difference is that elm seed bugs are primarily found on elm trees. They feed on elm seeds, but will also feed on and live in other types of trees. They are most visible in warmer weather and will create an unpleasant odor if crushed.”  According to BugGuide:  “Invade homes during the summer to escape heat, and then stick around through the winter … One generation per year and adults overwinter. Doesn’t pose a threat to trees, but may show up indoors in huge swarms.” 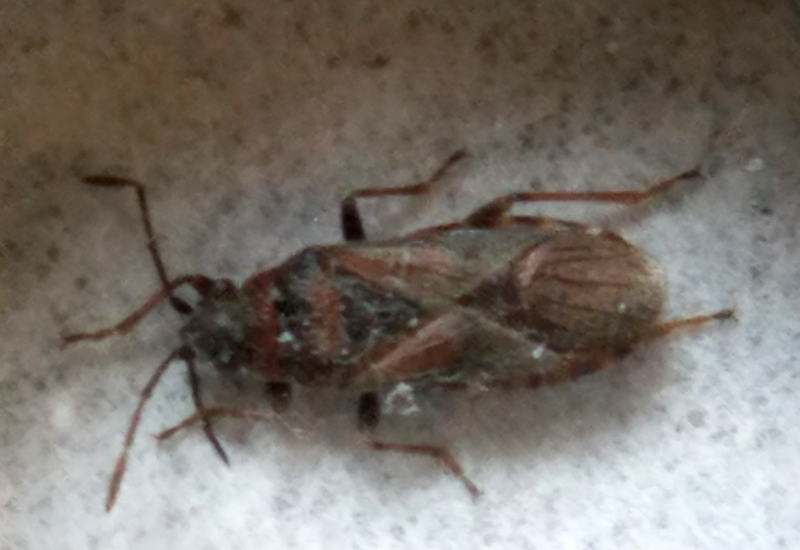 Dear JRW,
This is an Elm Seed Bug, Arocatus melanocephalus, which we identified on BugGuide.  According to BugGuide:  “Native to, and widespread in S. & C. Europe, established and spreading in w. US (first detected in Idaho 2012)” and “Invades homes during summer, may stay through the winter.”  Based on BugGuide data, Utah is a state that has experienced infestations.  According to Utah State University Extension:  “There’s a new bug in town. Since July 2014, Utah State University Extension’s Utah Plant Pest Diagnostic Lab has received numerous calls about a small, brown and black insect gathering in and on homes. The elm seed bug, a native of Europe, was first identified in the United States in Idaho in 2012 and in Oregon in 2013. While the first samples from Utah came from Salt Lake County, the insect is likely well established along the Wasatch Front and Cache County.  Elm seed bugs feed mostly on elm seeds, but can be found on other trees, such as the linden. Luckily, the bugs are not a concern for the health of elm trees, but they have become a nuisance pest, similar to boxelder bugs, by entering homes and buildings in the spring, late summer and fall. However, unlike boxelder bugs, these bugs can emit a pungent smell, similar to bitter almonds, from their scent glands.”  Introduced species without natural predators pose a significant threat to native ecosystems.

7 thoughts on “Is Elm Seed Bug Native To Utah? #1 Answer”