Paper wasps are a very common sight during the summer. They look very much like yellow jackets. Hence a lot of people want to know if a paper wasp stings humans. Here’s a detailed explanation.

Yes, a paper wasp will most certainly sting you if you provoke it. After all, hell hath no fury as a wasp provoked!

However, it’s not as likely to do it as yellow jackets or honey bees, nor is the sting as painful.

The striking wasp in the spotlight today is known for making nests out of paper-like materials. It lives in small colonies, and the workers will protect the colony and queen at all costs.

These beneficial garden buddies feed on nectar and encourage pollination, although their bodies are not as fuzzy as the bodies of bees (so they can’t carry as much pollen).

They also love to prey on caterpillars to feed their wasp larvae. They often build nests in urban areas, woodlands, forests, and heaths.

Let’s find out if the wasp giving you tough competition in origami lessons knows how to sting.

What Are Paper Wasps?

These vespid wasps are about 0.5-1.5 inches long with black, brown, and reddish bodies. Some species can be seen sporting vibrant yellow markings or red stripes, while some of them don’t have a band of bright color altogether.

They are smaller than European wasps and have different habits and life cycles. The semi-social paper wasps live in small colonies but lack a worker caste.

Paper wasps get their name because they scrounge wood from households and chew it into a pulp to create paper-like nests sculpted like umbrellas.

Approximately 700 species of paper wasps exist throughout the globe, out of which 22 are found in North America, United States. Most of them can be found in the tropical regions of the western hemisphere.

Sometimes referred to as umbrella wasps (because of the peculiar shape of their nests), paper wasps are larger than the average wasp.

In contrast to yellow jackets and hornets, which can be downright hostile, Polistine paper wasps will normally only attack if they or their nest are antagonized.

Their territorial nature can lead to dangers for humans, and their stings can be painful.

Their sting, like that of all venomous animals, can cause a potentially lethal anaphylactic reaction in people who are allergic to insects.

Paper wasp stings are quite dangerous; they can cause localized swelling and pain. For people allergic to wasp stings, the situation can get much worse.

They might experience difficulties while breathing, their lips or throat might swell, their heartbeat might start beating faster than normal, and they might feel very nauseous. In such situations, proper medical treatment should be sought immediately.

Yes, most definitely. But like some other wasps, they do not sting unless provoked.

These long-legged vespid insects mind their own business. Avoid stepping on their nests or trapping them for a weekend without intense pain.

If you are having an allergic response or experiencing any of the above-mentioned symptoms, seek help immediately.

Dr. Justin O. Schmidt – entomologist and maker of the Schmidt Sting Pain Index describes the pain as “caustic” and scorching.

According to Schmidt, the makers of honeycomb lookalike nests leave a bitter and unforgettable aftertaste that feels as if someone has spilled a beaker of hydrochloric acid on your paper cut. A red paper wasp sting is quite painful and leaves some lingering effects.

To treat a wasp sting at home, you can:

Yes, paper wasps are quite beneficial. Although they do have a habit of sucking out the fruits growing in your garden, they also eliminate pests threatening the lushness of your garden.

By feeding on the nectar of flowers, paper wasps facilitate pollination. If you identify a nest in a remote place where nobody is likely to come across it, you should leave it alone.

Will a paper wasp sting you for no reason?

If you don’t give the wasp any reason to sting you, it is unlikely that a paper wasp will go out of his way to sting a human.
However, paper wasps can get defensive and attack you when threatened or provoked. Make sure you avoid paper wasp nests and avoid stepping on them for your safety. If your body experiences intense reactions to wasp stings, seek medical help.

How long does a paper wasp sting last?

A paper wasp sting pain starts fading after fifteen minutes.
By using an ice pack on the area and taking anti-inflammatory medicines and antihistamines, one can reduce the swelling, redness, and pain in the affected area.
If the wasp sting has caused a systemic reaction, you must seek help immediately.

Yes. On a scale of 1-4 on the Schmidt Sting Pain Index, the red paper wasp scores a caustic 3.0. On top of the bitter aftertaste left, it can also cause palpitations and a severe reaction in some people.
The slightly less painful Polistes Versicolor also gets a sting score of 1.5 on 4, so its still quite painful.
It is better to avoid these creatures and prevent their nesting in areas you frequent to steer clear of their painful stings.

Unless you’re threatening them, paper wasps are pretty beneficial for your home gardens. Try not to flap at them or brush them off if they land on you, be still, and they’ll fly away.

However, if you approach their colony or nest, these wasps can get aggressive and stingy, so it’s best to maintain a live and let live approach with them.

Paper wasps, just like some other wasps, do not sting without being provoked or feeling threatened. However, they are semi-social and don’t like people approaching their nests.

These stinging insects love a temperate climate and caterpillars for dinner. Paper wasps are creatures that mind their own business and expect you to do the same.

Paper wasp stings can be quite bad, and here is proof of this from real-life encounters of our readers: 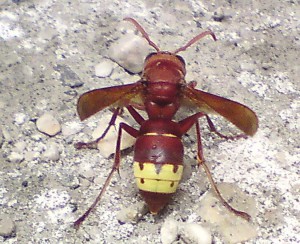 Wasp? Location: Near Marmaris in Turkey November 22, 2010 6:06 am I was in Turkey and came upon this little fella. I guess at a wasp, but maybe you could clarify? Signature: Katie Hi Katie, We tried unsuccessfully to identify your Paper Wasp in the genus Polistes to the species level. Correction: November 28, 2010 Hi Daniel: This looks like an Oriental Hornet, Vespa orientalis (Vespidae: Vespinae). The species ranges from southeast Europe and north Africa, across east and central Asia to India and Nepal.  It has also been introduced accidentally to China, Mexico and possibly parts of South America. There are lots of online photos but I was drawn to a site with an interesting (and curious) accompanying article about “Thermoelectric Effect in Hornet Silk and Thermoregulation in Hornet’s Nest”. Regards.  Karl Thanks for correcting this glaringly incorrect identification Karl.  We dismissed the European Hornet as a possibility and jumped straight to trying to identify Polistes species. 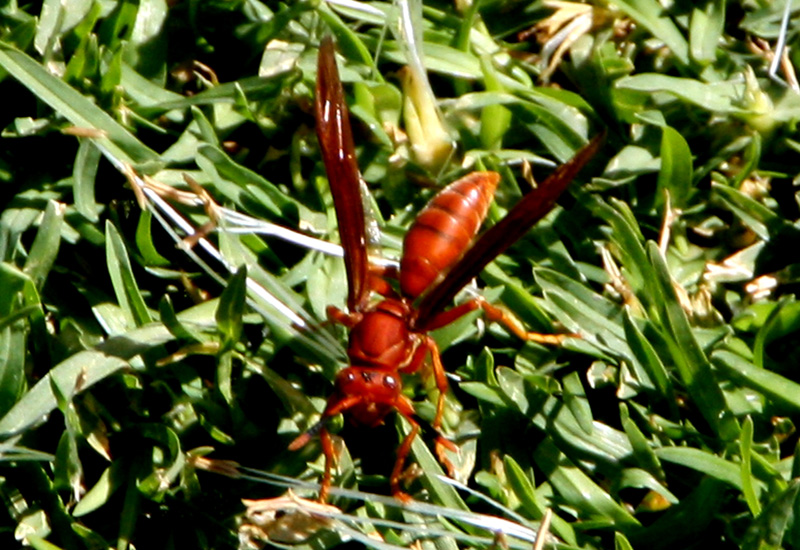 Subject: Red wasp identification Location: San Miguel de Allende, Guanajuato, Mexico March 7, 2015 7:57 am This red wasp was photographed in San Miguel de Allende, Guanajuato, Mexico in late February. It was in the grass. Can you help identify it? Signature: Wasp interest We believe this is a Paper Wasp in the genus Polistes, and we have received numerous reports that Red Paper Wasps from Texas are aggressive and have a very painful sting. Update:  February 26, 2019 Update to a 2015 article /sighting.  It’s now 2019 and once AGAIN February. Red Paper wasps are popping out. Definitely attracted to water. Haven’t tried the sting. I will try and contribute next month. John Reinhardt 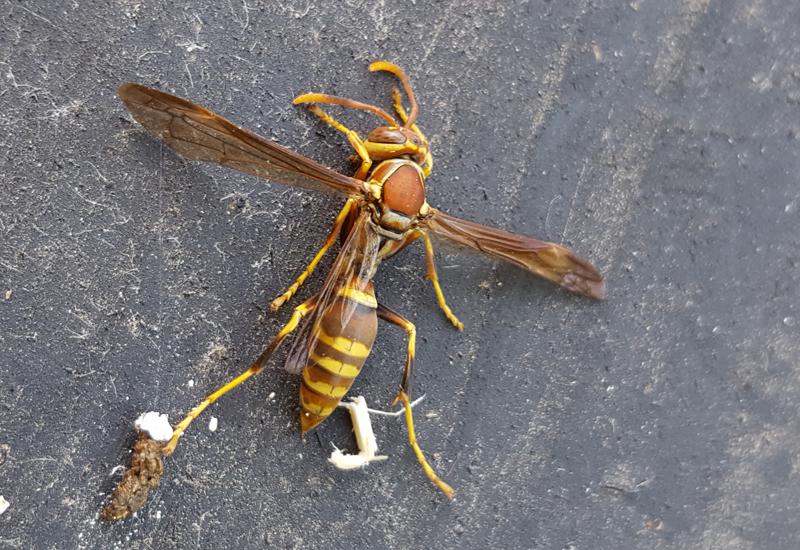 Subject: Hornet? Wasp? Location: Holly Springs, NC August 13, 2016 1:54 pm Dear bugman, What is this? Found a nest, was stung! Signature: Ouch We believe based on the image on Dick Locke’s site and this BugGuide image that this Paper Wasp may be Polistes dorsalis.  This is not an aggressive species, but they will defend the nest. 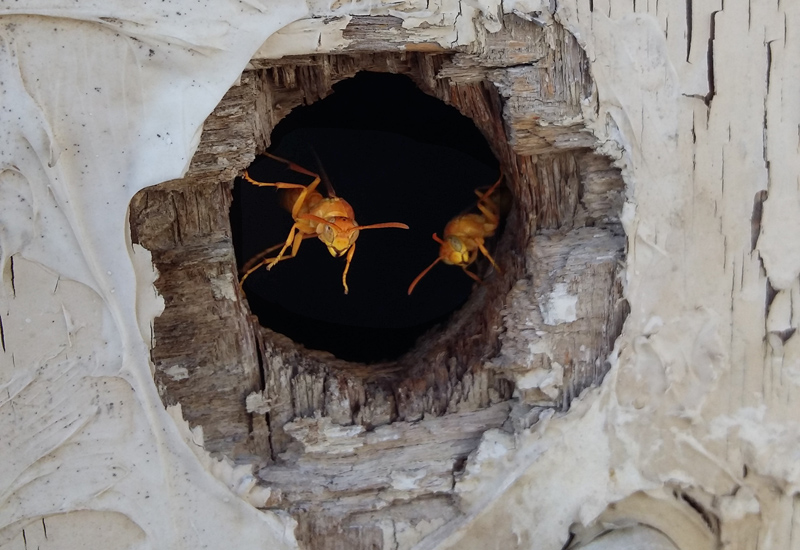 Subject: identify an insect Location: bahrain September 21, 2016 9:59 pm Want to know the name and what should do if bite ? Signature: nilmi Dear Nilmi, These are Wasps, and we believe they may be Paper Wasps in the genus Polistes.  Paper Wasps are social wasps, and though they are not aggressive, they might sting if their nest is disturbed.  If you are prone to allergic reactions, you may need to see a physician, but for most people, a sting will cause nothing more than local swelling and sensitivity.  We believe because of the bright yellow color, your Paper Wasps might be Polistes wattii which is pictured on both pBase and BirdsoMan where it is identified as the Arabian Paper Wasp.  Your image is awesome. 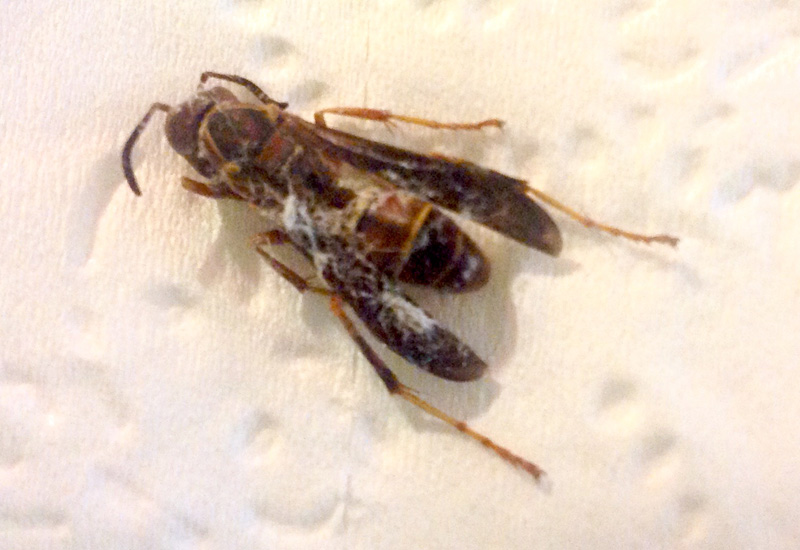 Subject: Early Attacker Location: Rockmart, GA October 6, 2016 8:53 am I just got stung by this bee this am around 7:30 a.m. I live in Rockmart, Georgia. Do they deposit stinger? What is this? Signature: Cyndi Dear Cyndi, This is a social Paper Wasp in the genus Polistes, not a Bee.  It might be Polistes bahamensis which is pictured on BugGuide and listed as being found in “FL, GA and LA” according to BugGuide.  Of the genus, BugGuide notes:  “Not as aggressive as Hornets, Yellowjackets. May be considered beneficial to gardeners because of predation on herbivorous insects.”  Social Wasps, including Paper Wasps, are most likely to sting when defending the nest from perceived threats, or when they are accidentally or purposely handled.  Social Wasps are able to sting multiple times, and the stinger is not left behind. 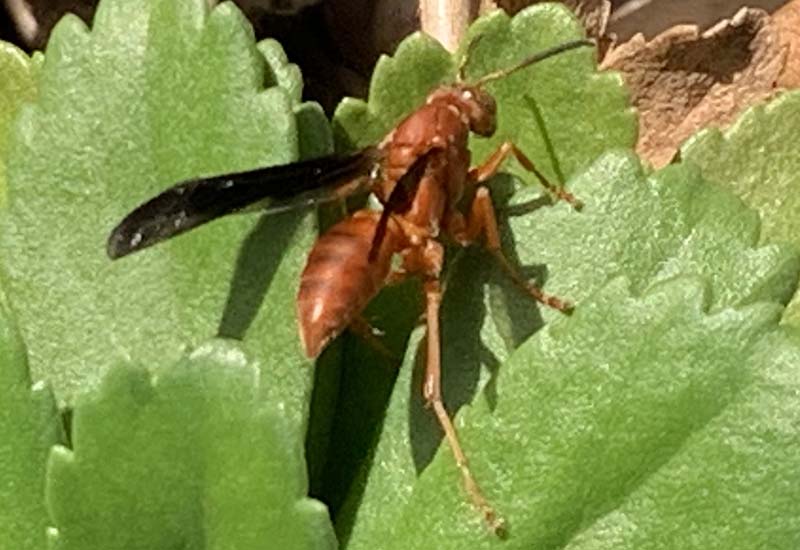 Subject:  Wasp? Geographic location of the bug:  Northwest Florida Date: 11/01/2021 Time: 02:35 PM EDT Your letter to the bugman :  Can you help me ID this guy. He looks like a red wasp but his wings look black How you want your letter signed:  Lin Dear Lin, This is a Paper Wasp in the genus Polistes, and we believe we have correctly identified it as a Fine-Backed Red Paper Wasp, Polistes carolina, thanks to images on BugGuide.  Based on the BugGuide information page, there are several species that look similar. Now we must take the time to apologize to you for the delay in our response and we want to let our readers know that Daniel’s hiatus has hopefully ended.  Since his last posting on October 30, he ended a month stay in Ohio, took the train back across country, and completed teaching fall semester. Daniel never had an opportunity to declare a Bug of the Month for November 2021, and though the month has long ended, this Paper Wasp is a perfect candidate for that distinction since BugGuide indicates they are commonly sighted in “Summer-fall.” 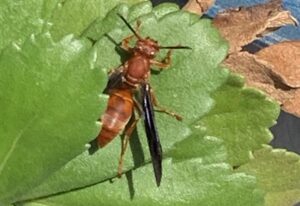 9 thoughts on “Does A Paper Wasp Sting? Helpful Facts”