Dobsonflies are amazing creatures and one of the largest insects in the world. Let’s learn all about the dobsonfly weight in the article below.

With some species of dobsonflies being among the largest insects in the world, it’s only normal for them to generate curiosity.

Especially if you find interested in various insect species, you might be trying to find out more about these large aquatic organisms.

Considering their large dimensions, you might be particularly curious about their weight.

Well, while they are quite light, it’s hard to weigh them accurately. Let’s learn some more about these interesting insects.

What Is This Bug?

The dobsonfly is a large aquatic insect found in Asia, Australia, Africa, and the Americas. Its wings resemble those of a dragonfly – four narrow and translucent wings with a visible network of veins.

However, the biggest identifying feature of this bug is its pair of sickle-shaped mandibles. Although these mandibles look quite scary, dobsonflies don’t usually bite humans.

They are a part of the Corydalidae family of insects.

How Big Does it Grow?

As mentioned previously, dobsonflies grow quite big and are among the largest insect species in the world.

The adult size varies from one subspecies to another, with the largest one being the Asian Acanthacorydalis Fruhstorferi – with a wingspan of up to 8.5 inches.

However, the Eastern Dobsonfly (Corydalus cornutus), which you’d find in the US, has a body size of around 3 inches and a wingspan of 5 inches.

The males have long and curved mandibles growing up to 1.6 inches. Female dobsonflies have much shorter but sharper mandibles with powerful jaws, careful of inflicting painful bites.

How Much Does It Weigh?

The exact weight of these aquatic bugs hasn’t been recorded yet. However, considering their size and structure, it’s easy to see that they’re quite lightweight.

The Eastern Dobsonfly, for instance, can’t weigh more than just a few ounces.

How Big are the Dobsonfly Larvae?

Dobsonfly larvae are called hellgrammites. With flattened and elongated bodies, they usually grow up to 2 to 3.45 inches. However, some species of hellgrammites can also reach a length of 4 inches.

Hellgrammites are usually tan, dark brown, or black, with the abdomen divided into eight segments.

The first seven segments each have a pair of leg-like appendages with ventrolateral tufts of tracheal gills that help them breathe underwater.

All eight segments have lateral tactile filaments that help protect the larvae from predators or other hellgrammites.

These larval bugs have three pairs of legs, along with two hooked appendages on the rear to help them anchor themselves against the flow of water.

Like adult dobsonflies, the larvae have tough mandibles and can bite hard.

The lifecycle of a dobsonfly is quite interesting – it lives for several years but only a few days as an adult. Let’s explore the different stages of the life cycle of dobsonflies.

How big does a dobsonfly get?

While dobsonflies are large insects in general, the size may differ between different subspecies. The Eastern Dobsonfly grows up to 3 inches and has a 5-inch wingspan. On the other hand, the Asian Acanthacorydalis Fruhstorferi boasts an impressive wingspan of 8.5 inches.

How painful is a dobsonfly bite?

This depends on whether you get bitten by a male dobsonfly or a female one. The long mandibles of male dobsonflies aren’t very suitable for biting and do not inflict any pain. However, the females have short and sharp mandibles with powerful jaws, and their bites can even draw blood.

Dobsonflies aren’t rare, but they’re uncommon in the US. While you’ll be much more likely to come across these aquatic insects in China or Vietnam, they aren’t as abundant in North America. However, you can still find the Eastern Dobsonfly around streams, creeks, or small rivers.

Regardless of their sex, mature dobsonflies don’t feed at all. Hence, they aren’t a threat to crops or gardens. Of course, this is quite contrary to their aggressive predatory nature as hellgrammites. Adult males mate soon after pupation and die within a few days.

If you live near a body of water, there’s a chance that you might find dobsonflies around your home.

Don’t let the dobsonfly size scare you; you won’t have to worry about painful bites unless you handle female dobsonflies. Thanks for reading this article, and I hope it was worth your time.

Dobsonflies are so huge that this question isn’t surprising at all – many of our own readers have asked us the same over the years.

Do go through some of these old emails and also see some beautiful pics of this bug. 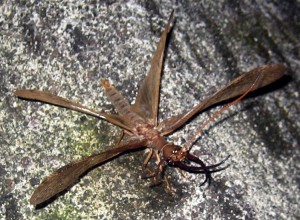 a creature for sure! Found this on the steps of my hotel in Arenal Volcano in Costa Rica! This looks like one of those dobson flies…i got a picture with the wings flapping too! It was atleast 6 inches!~ scared! Arenal, Costa Rica Hi Scared, Don’t be afraid. Male Dobsonflies are quite harmless despite the sabre like mandibles and threat posture. The female Dobsonfly has more modest mandibles, but hers can produce a nipping bite. The male uses his trophey mandibles during the mating process, or so we have read, but we have never been lucky enough to have a photo of a mating pair to proove this statement. 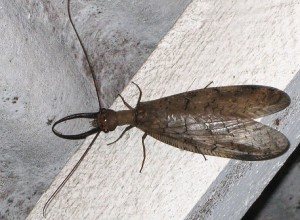 sci-fi insect monster Wed, Nov 26, 2008 at 11:00 AM We just found this bug in the southeastern part of Brazil, just outside of Sao Paulo city. It was about five inches long (including those huge pincers). It entered the house late at night flying around, and looked like it had two sets of wings. It can bend the top part of its body backwards to use those pincers. Can you tell us what it is? Creeped out in Brazil Juquitiba, SP, Brazil Dear Creeped Out, This is a male Dobsonfly.  Though those mandibles look quite formidable, he is actually quite harmless.  The female Dobsonfly has much less impressive mandibles, yet she can and will bite a hapless human, but since she has no venom, she too is harmless.  We have read that the male Dobsonfly uses his pincers in the mating process, and we eagerly long for proof of this in a photograph. 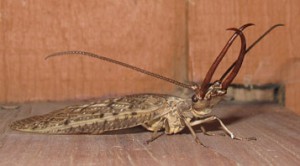 Large Flying Insect with Tusk-Like Pinchers and XL Antennas January 22, 2010 Dear Bugman This encounter happened while visiting my family, in rural North Eastern Pennsylvania. It was July 20th, around 8:30 pm, when this bug crashed into the wall of my porch. I was startled by the noise and by the size of what landed on the 2″x6″ next to me. The bug seemed to be quite stunned from the collision as well and stayed rather still, while i made this picture. I live on a lush hillside of Mt Washington in Los Angeles and have seen some very interesting bugs, but never anything like this….Have you ever seen this bug before? Lee Thompson Rural North Eastern Pennsylvania Hi Lee, This is the third male Dobsonfly image we posted this week, but the interesting thing is that none of the images were recent images.  We are curious what in the zeitgeist caused our readership to begin to submit old photos of Dobsonflies this week. 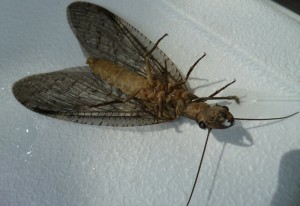 Scary Az Bug Location: Fossil Creek Az July 18, 2011 5:41 pm We found this bug it’s body was about 3 inches long about a 4-5 inch wingspan and scary as hell looking. Found it in Fossil Creek az. Any idea?? Thanks Jason Signature: none Dear none, This is a Dobsonfly, and based on your Arizona location, it is one of the three Western species.  We hope you were fishing and that you used this female Dobsonfly as bait, thus explaining the fishhook through her body.  Hellgrammites, the larvae of Dobsonflies, are a favorite bait among fishermen. 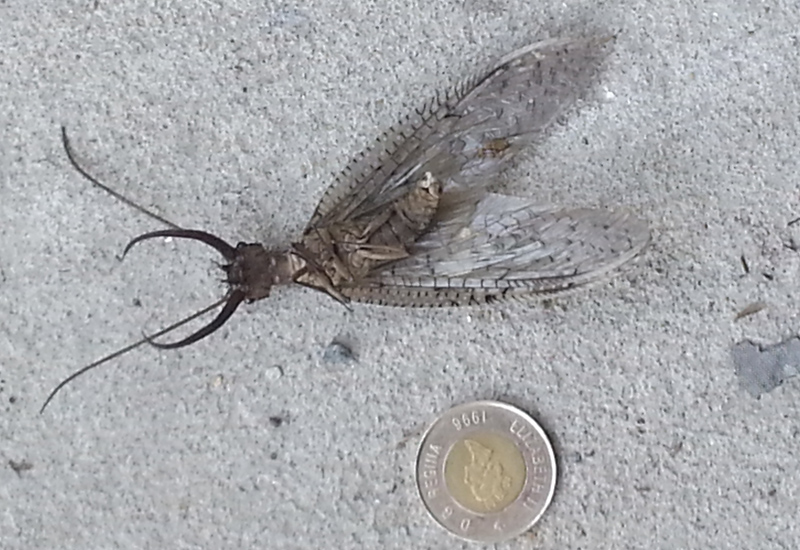 Subject: Unknown monster Location: Laval, Quebec, Canada September 27, 2015 4:59 pm Hi! I found this insect, half dead, very close to the entry door of my workplace. I’ve shown the pictures around a bit, and everyone is curious to know what this could be. The Canadian $2 coin nearby is 28 mm large (1.1 inch). Nobody has ever seen such a huge and monstrous bug like this around here. That would be great if you had any idea what this is! Thanks for your help! Greetings, Signature: Maxime Joanis Dear Maxime, The male Dobsonfly pictured in your image is actually quite a common species found in much of eastern North America, but late September is rather late for a sighting.  Most of our sightings arrive in late spring and early summer.  Despite the enormous mandibles, the male Dobsonfly is perfectly harmless. Thanks for the super quick answer! Sorry it was a common/boring one. I swear, nobody here has ever seen this thing! In case you track sightings, it was not seen when I asked, but rather on July 10 (you can see the date in the picture’s metadata (not the file’s creation/modif dates)). Made a small donation! 🙂 Great service! Thanks! Maxime