Do aphids jump onto humans and pets? Can they hurt you? Or do they have other ways of moving around on your plants? Let’s find out.

Aphids are one of the most common pests you can find crawling on your plants. These tiny creatures can crawl as well as fly (sometimes) from one leaf to another.

But in case you were wondering, they cannot jump!

While several aphid species can infest your plants, none of them have the equipment that some other bugs, like springtails, fleas, and whiteflies, have that aids them in jumping.

Let us find out more. 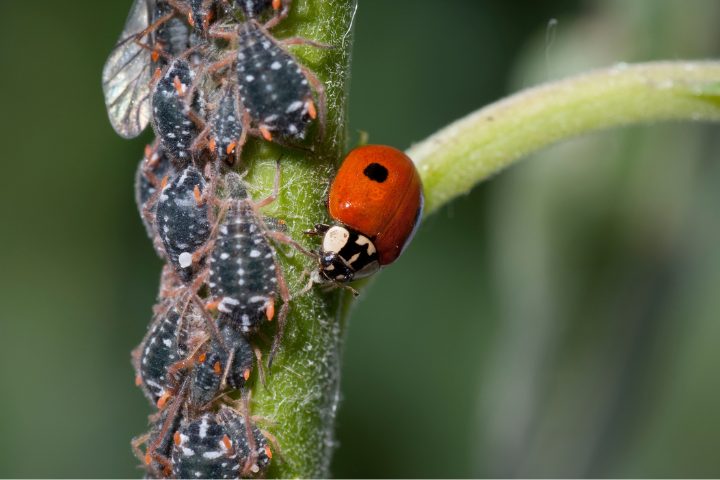 Aphids cannot jump, but they can crawl and (sometimes) fly short distances.

Most often, aphids like to hitch rides on animals, people, or potted plants to get from one place to another.

When an aphid infestation occurs, the insects usually hop or crawl from the leaves of other plants that are near the ones they are on.

This helps them spread the colonies to more favorable environments where they can multiply and thrive.

Very few aphids can fly. This only happens when they are born under certain conditions.

In an aphid’s lifecycle, there are distinct stages. From an egg to a nymph to an adult, aphids molt many times to grow their bodies. But in most cases, none of these stages creates wings.

But when the food supply is scarce, mother aphids will produce babies that are born with the ability to fly. This helps them move to other plants instead of having to crawl or hop.

This happens most often when there is an overpopulation of aphids on a certain plant, and there might not be enough food left for their offspring when they hatch.

In other bugs which can jump and fly, these superpowers are defense or hunting mechanisms. For example, the springtail jumps to protect itself from predators, whereas the grasshopper does it to catch its prey.

But aphids are uniquely different since this ability doesn’t come to them as either of these strategies – it is simply a tactic to survive resource scarcity.

How Do Aphids Protect Themselves If They Can’t Jump or Fly?

So we have established that they can’t jump, and most of the time, they can’t fly either. So how do these tiny bugs save themselves when a predator is around?

Simply put, aphids can drop to the ground when attacked. Normally they love clinging onto the plant leaf and steam, extracting sap from the plant. But when faced with danger, they drop down and crawl away for dear life.

One interesting survival tactic uses the symbiotic relationship between ants and aphids. Aphids produce sugary honeydew, which the ants love to consume. In exchange for honeydew, ants protect aphids and herd them around.

There are a lot of garden pests that can fly and jump around from one plant to another. Aphids are known for their tiny wings and ability to hop away from their host plants. But some other insects can jump.

Springtails are found in areas of high humidity and can become nasty pests to get rid of. These insects have a fork-like structure under their abdomen that works like a spring, helping them jump.

They are known to travel from one place to another by hopping a few inches at a time. Springtails live on walls, corners of houses, and in the soil of potted plants.

While they cannot jump too far, the few inches are enough for them to make a new plant their host. They can hop from one potted plant to another in the soil, finding a new space to multiply.

Whiteflies can also jump. They use their legs to propel themselves into the air and can cover quite a bit of ground this way.

If you have ever seen a whitefly on a plant, chances are it didn’t just land there – it jumped.

Whiteflies are capable of making some of the longest jumps among pests. Their legs are more powerful than their wings, and they can stop mid-air from controlling their speed before landing on a new surface.

Common fleas and flea beetles can take long jumps from one surface to another. They can jump vertically up to seven inches and horizontally up to thirteen inches.

Fleas use their powerful legs to make quick, successive jumps that help them escape predators or move from one host to another.

When a flea is ready to jump, it bends its body and stores energy in a small elastic protein called resilin. Then, it releases the energy stored in resilin all at once, propelling itself into the air. 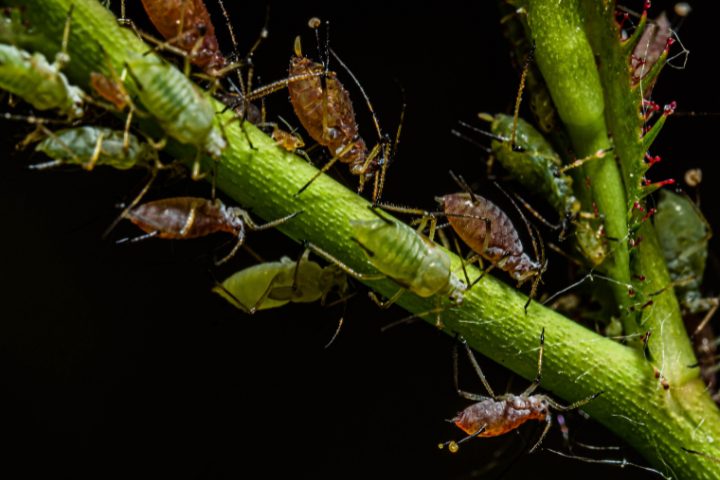 Jumping Bristletails are one of those house pests you do not want coming near your house!

These are wingless, but they can jump with the help of their legs and abdomen. In order to do this, they push back their legs and contract the abdominal muscles, letting them arch their bodies downward. Their jumps can be about six inches.

Jumping Bristletails can be very difficult to locate once they start moving from one place to another to start an infestation. These insects also crawl between surfaces so that they can settle in any part of your house.

Click beetles are insects that hold a record for jumping long distances. They can jump distances about 25 times the length of their body.

The click beetle can launch itself with the help of its muscles and can land on its feet. Sometimes, the beetles get flipped after a jump, but their reflexes help them to get back on their feet quickly.

How do I know if it’s aphids?

You can identify aphid populations by following the trail of a white, sugary substance on your leaves (called aphid honeydew).

Another indicator is leaves that are beginning to curl or turn yellow. Look on the undersides of leaves because that’s where aphids are often hiding.

Aphids cannot move fast. But some aphids can fly, which helps them to spread quickly from plant to plant.

Aphid infestations become difficult to control if not noticed early on because they reproduce very quickly. They can do this both sexually and asexually.

No, pea aphids (or green aphids) cannot jump. No species of aphids can jump, in fact.

Green aphids use other ways to protect themselves, the chief one being camouflage: they blend in so well with the color of the leaves that they are nearly impossible to spot.

Do aphids jump from plant to plant?

Aphids do not jump. They can fall down from the leaves and crawl from one plant to another. In some cases, they might even be able to fly.

If you see an aphid on one plant, it is likely that there are other aphids nearby on other plants.

Aphids don’t jump, but they have some amazing adaptations that help them to survive, such as the ability to fly in extreme circumstances.

If you are racking your brains on how to get rid of aphids, one of the best ways to do so is to send in someone who knows how to kill them – no, I am not talking about pest control; I am talking about natural enemies of aphids.

Green lacewings, ladybugs, beetles, and other beneficial insects can help protect your plants from aphids. Thank you for reading! 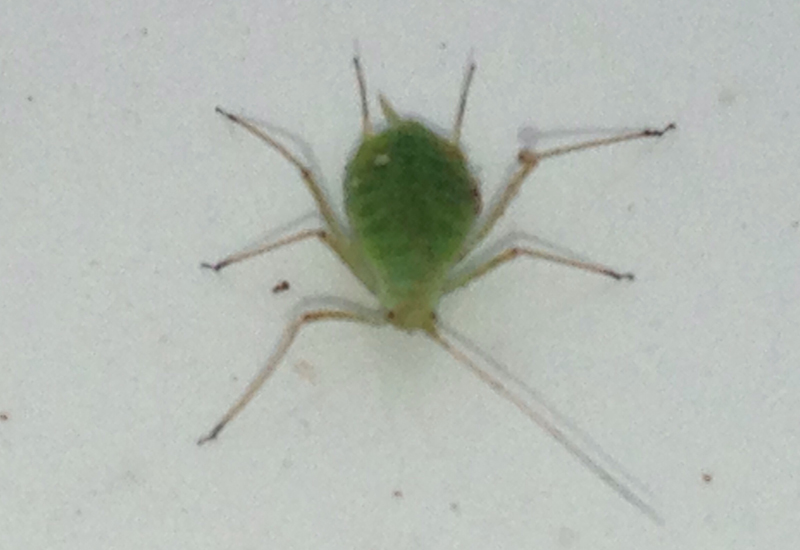 Subject: Is it poisonous?
Location: Sand springs oklahoma
April 7, 2015 6:33 am
Trying to figure out what this is … Found it by a rose bed filled with weeds … Was all over the wood logs
Signature: I don’t know lol

This is an Aphid, an insect reviled by rose growers because Aphids multiply rapidly without even mating, through an asexual reproductive process known as parthenogenesis, and because Aphids feed by sucking fluids from the young growth on plants including flower buds, but Aphids are not poisonous. 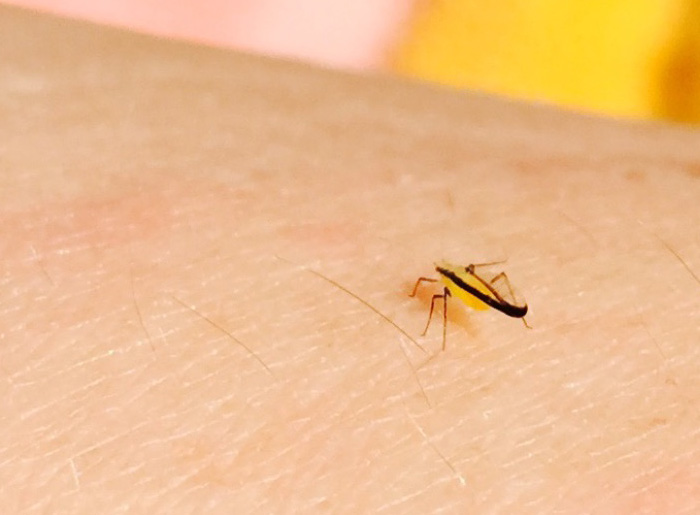 Dear Todd,
This is some species of Aphid.  We found a posting on the Backyard Arthropod Project that looks like your Aphid, and links to BugGuide’s pages on the subgenus  Lineomyzocallis and to the genus Myzocallis, both of which are reported in Canada. 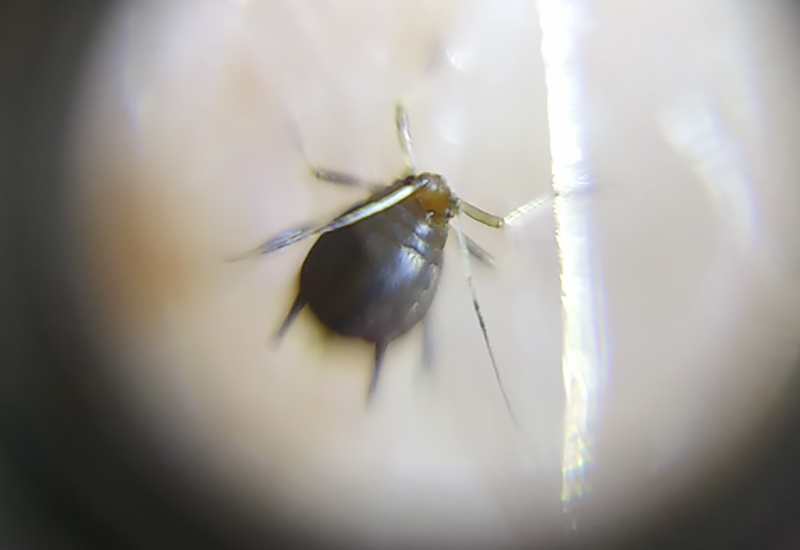 Subject:  What’s this bug?
Geographic location of the bug:  Kauai, Hawai’i
Date: 04/30/2019
Time: 11:49 AM EDT
Your letter to the bugman:  Hi and good day. I found this guy and was able to get a video of him on my leg at 90x magnification.
I thought he was a tick, at first but he doesn’t seem to be classified that way.
How you want your letter signed:  Samn

Dear Samn,
This sure looks like an Aphid to us.

Letter 4 – Aphid from The Netherlands 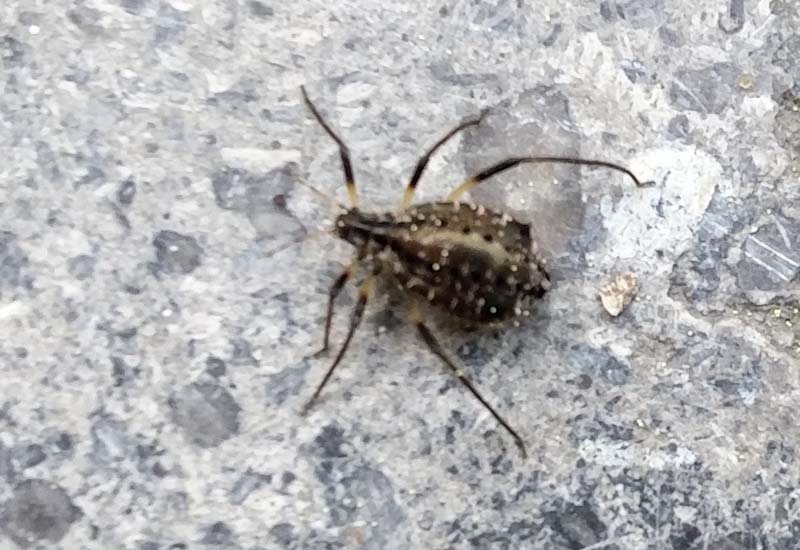 Dear Marinus,
This is an Aphid.  Aphids are generally considered garden pests because they suck nourishment from plants.

Letter 5 – Aphid in the Snow 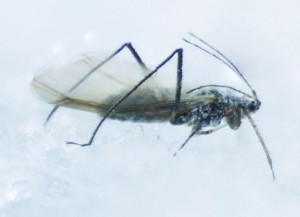 Subject: Snow fly?
Location: Durham, NC USA
January 18, 2013 3:37 pm
I’m an avid insect and macro photography enthusiast and I spotted something this morning on some fresh snow that caught my attention. Looks to be a sp. of snow fly, but I’m not positive. It was a tad smaller that a Drosophila melanogaster (common fruit fly) Any ideas?
Thanks!
Signature: Andrew B.

Hi Andrew,
This appears to us to be an Aphid, and we presume that snow is not its typical habitat.