Did you know that you have hundreds, maybe thousands of farmers living right under your nose? Yes, ants are farmers of aphids. But how do ants farm aphids, and why do they do it? Let’s find out.

Yes, many ant species are known to farm aphids. Ants and aphids show mutualism; that is, they depend on each for survival and benefit. It is a symbiotic relationship.

Aphids secrete a substance called honeydew which ants love to eat because it is sugary. In return, they offer protection to the aphid colony from predators. 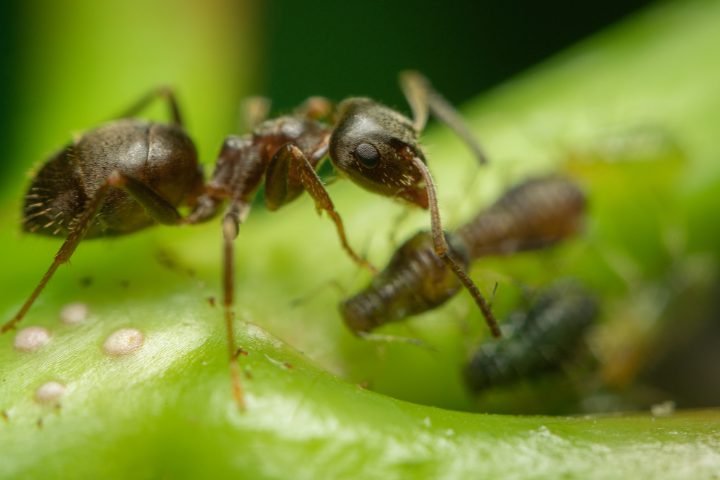 Tiny ants are a wondrous member of the insect family. They are popular for being able to lift many times their own weight. But you would be surprised to know that ants are farmers too!

Recent studies have shown that ants herd aphids, protect them from other insects such as ladybirds and lacewings, and in return “milk” aphids for honeydew.

Studies at the Royal College of London show that ants rule with an iron fist over their aphid subjects and adopt many methods to maintain their herd of aphids.

They bite off the wings of adult aphids to keep any rebellious pests in line. They also produce a secretion on aphid eggs to inhibit the growth of wings.

They even secrete a trail of pheromones which make aphids dazed and willing to follow around (talk about mind control!).

Both of these techniques keep herd members from wandering away.

Survival of the Fittest

A study showed that just like humans, ants believe in survival of the fittest and select only the most productive aphids for herding.

What do they do with the rest? Well, eat them, of course. Aphids that do not produce enough honeydew or are suffering from disease quickly become ant food.

For those wondering how this is similar to humans, know that the chickens you eat are the ones that stop producing eggs!

The surprising thing here is not that ants eat the aphids (which are a wonderful source of protein for the ants) but that they let some of them live.

What Do Ants Get Out of All This?

When aphids extract nutrients from a plant, they miss out on one thing – essential amino acids. Plant sap only has four main amino acids, enough for the plant to carry nitrogen up and down but not enough for an aphid.

Aphids generate amino acids from the plant sap through an endosymbiotic bacteria, Buchnera aphidicola. The waste product of this process is honeydew.

What is a waste product for an aphid is nectar for ants because it is almost entirely made of sugar. Ants herd aphids to get this sugary honeydew.

In fact, aphids even have a special trophy biotic organ just to carry around this honeydew, so the ants can get it when they want (It’s like having a beer on tap).

As long as these aphids produce an ample amount of honeydew, ants protect them from predators.

But the same aphids quickly become ant food the moment they become diseased or cease to have made enough honeydew for the ants.

In sum, the relationship between ants and aphids is heavily skewed in favor of ants.

What Do Aphids Get From This Relationship?

Ants act as a protection belt for aphids. They keep them safe from other large insects such as ladybirds and parasitic wasps.

Ants also lay a trail of pheromones to guide the aphids to reach the next food source once their current host plant is dried out or some other calamity befalls the aphid infestation.

For example, if you try to spray an infested area of host plants with soapy water spray, ants will move the aphids that survive to other plants.

Ants also help in maintaining hygiene. The honeydew that aphids secrete can quickly turn into a black, sooty mold, which can cause diseases.

Ants run off the mold from aphids’ abdomens, protecting them from these diseases. 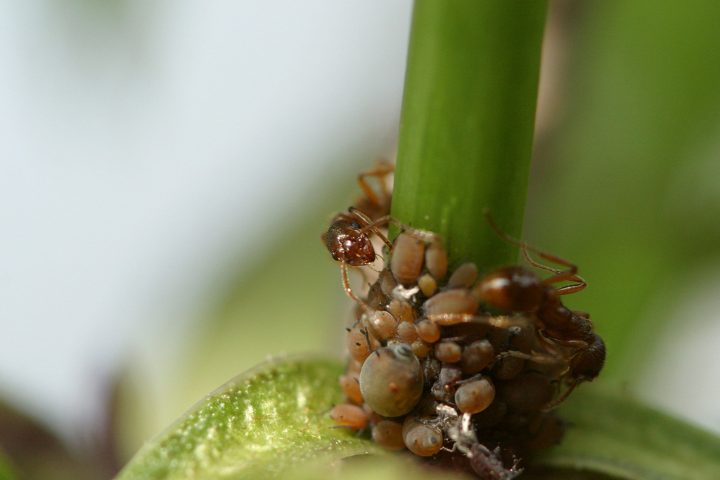 Why Ants and Aphids are a Dangerous Combination For Plants?

The aphid-ant combo deals a deadly double blow to your garden. On the one hand, aphids suck the nutrients from your plants.

On the other, any attempt that you might try to destroy said aphids by releasing beneficial insects like ladybugs gets thwarted by ants.

Moreover, if you try insecticides or soapy water and other remedies, ants herd the remaining aphids off to another plant, keeping their colony alive.

Aphids move to a new plant and reproduce in huge numbers until the infestation is once again a big problem.

Thus, getting rid of the mutualistic couple is very difficult. The combination serves as a nightmare for gardeners.

How To Stop The Ant-Aphid Combo From Infesting Your Garden

Eliminating the symbiotic pair from your garden might seem impossible. So, rather than focusing on how to eliminate them, let’s try to prevent them from ever happening.

You need to make it unfavorable for both the insects to thrive in your garden. You can do this by the following methods:

What kind of ants farm aphids?

Yellow meadow ants herd root aphids and are involved in livestock-like practices, such as removing the weak and nurturing the productive ones.

Other ant species, such as Lasius niger or black garden ant, have also seen herding aphids.

Yes, although the relation between them seems symbiotic, if you analyze behavioral aspects, one can say that ants treat aphids more like slaves rather than equals.

Ants herd and protect them from getting honeydew, but once they become weak, they eat them.

Are ants good for killing aphids?

No, ants and aphids exist in a mutualistic relationship. Ants nurture and herd aphids for their honeydew.

Ants do not kill aphids but rather protect them against other beneficial insects, molds, or environmental stress. They only kill them when the aphids lose their ability to make honeydew for them.

Together, the two make a very hard-to-remove combo in any garden.

Yes, carpenter ants farm aphids for the sweet honeydew that aphids excrete after feeding on fleshy plants and their cell sap.

Carpenter ants rub the abdomen of the aphids to get the extract and protect the aphid colony in return.

Although ants protect the aphids, it is obvious that they treat aphids as slaves and look after them only to get the honeydew.

They even finish off the sick and weak aphids! While they might help aphids ward off predators, it is mostly just to keep their supply of honeydew secure.

Anyway, ants and aphids are a deadly combination for your house garden, and getting rid of them can take forever and cost a lot of money. 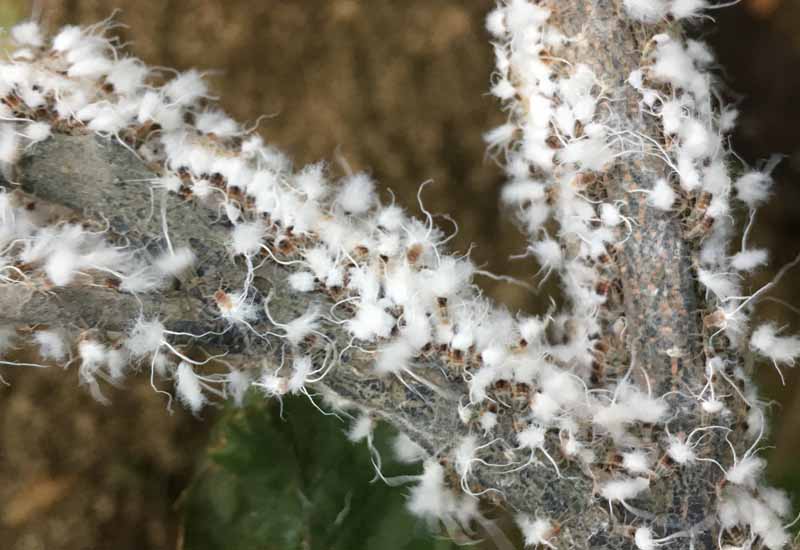 Subject:  Help identifying this
Geographic location of the bug:  Blawnox, PA
Date: 09/04/2017
Time: 06:16 PM EDT
These guys were not moving until I disturbed them. Then the all came to life and started moving. Thank you in advance for your help toward this matter.
How you want your letter signed:
Robert Sroufe

Dear Robert,
These are immature Hemipterans,  Do you know what plant they were feeding upon?  Could it have been a beech tree?  They look like Beech Blight Aphids, Grylloprociphilus imbricator, pictured on BugGuide.  According to BugGuide:  “They form large colonies of individuals covered with wax coating and wax feathered secretions. Fourth instar nymphs are slender, long legged and active” and “They, especially the fourth instar nymphs, fight predators by stinging them.”  There might be other similar looking species, but it would really help to know the food plant for your critters. 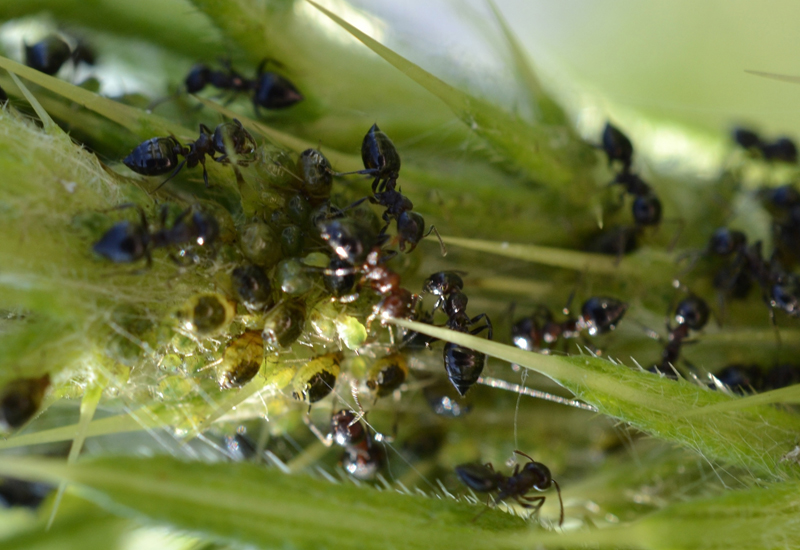 Subject: ants collecting honeydew from aphids
Location: Niagara, Ontario, Canada
July 1, 2013 6:05 pm
Hello there,
I came across these very busy ants on the weekend. While I knew they collected the sweet secretions from aphids (which I have heard called ”honeydew”), I had never actually seen them in the process. Hopefully in this photo you can make out the aphids and the ants coming and going. This was at the top of a fair-sized thistle. Anyway, I thought you might like it for your collection.
Signature: Alison

Hi Alison,
We don’t know what species of Ant nor Aphid you have.  We are rather fond, though, of the common name often given to Aphids of Ant Cows.