Millipedes are the oldest creatures to have crawled the earth. But mother nature has a cycle, and for every creature, there must be a predator. So, what eats millipedes? Let’s find out.

The slow-crawling critters you find in and around your house that can scare you just by being there are common millipedes.

With more than a hundred pairs of legs and a rather timid personality, these insects are very easy to spot and, for their natural predators, very easy to hunt.

However, these creepy crawlies have their own defenses, and that’s why the hunt is not as simple as one might think.

In this article, we will talk about what kills millipedes. Let’s see how some predators have evolved specifically to avoid the defense mechanisms of these creatures.

What Animals Eat Them?

If you consider the food chain of the animal kingdom, millipedes are unfortunately at the very bottom.

Some of the predators of millipedes include small animals such as birds, frogs, hedgehogs, and different kinds of rodents. Since these creatures live almost everywhere, their predators vary by location.

Spiny and adorable as they are to look at, hedgehogs are major carnivores in their natural habitat. These mammals eat a lot of insects, and millipedes are one of their favorites. As pets, hedgehogs like to be fed caterpillars; in the wild, they scout for worms instead.

Reptiles like lizards, geckos, and monitors are common predators that feed on millipedes.

Though most millipedes are too small to become a full meal for reptiles, they easily make up a good snack. Reptiles love crawling on walls and rocks to hunt for these bugs.

When compared in size, ants are a lot smaller than most millipede species. But these animals are vicious when they hunt in groups.

An army of Marvelous Ants is capable of attacking larger animals like millipedes and devouring them. Ants surround a millipede and tear their prey apart with their specially designed pitchfork-like mandibles.

Scorpions are one of the most vicious predators of many creatures. These venomous insects can sting and hunt insects much larger than them. They use their pincers to catch millipedes and slowly feed on them, sometimes stinging them to kill the prey.

One of the most common predators of millipedes is birds. Birds hunt a lot of insects, carrying them off the ground or from leaves up in trees.

Birds prefer arthropods like millipedes and caterpillars to feed their young ones. Millipede bodies are soft, and the chicks can tear them apart.

As mammals, animals like monkeys and lemurs do not feed on millipedes. However, we can call them predators of insects for another reason. They use millipedes as insect repellants.

Millipedes have a chemical defense that helps them ward off predators, which includes lethal ones like cyanide.

However, some creatures use these very chemicals in a unique way. Monkeys catch millipedes off the ground, biting them in half and rubbing them all over themselves.

The chemicals from the millipedes help to keep away mosquitoes in the wild. Capuchin monkeys are one of the main ones who do this.

Lemurs are native to Madagascar, where you can spot specific species of millipedes in the rainforests.

Similar to monkeys, lemurs rub millipede juices on their bodies to keep away pests. Some of them also ingest them as a form of intoxication and to treat indigestion.

Promecognathus is the name of a genus of beetles. But while many beetles are known to hunt prey, there is one very special feature about the Promecognathus.

These beetles can walk through a cloud of poisonous cyanide without a scratch.

We talked about millipedes’ chemical defense against predators, which involves emitting cyanide gas.

If a normal beetle comes to attack them, the millipedes will release this concoction to protect themselves.

The Promecognathus beetles have a high tolerance toward cyanide, making it easy for them to hunt millipedes.

Once these beetles dodge the attack, they grab the worm in their extremely powerful jaws and start ripping them apart.

The millipede will twist and roll in the beetle’s jaws, slowly succumbing to the injuries.

If millipedes become a nuisance in your garden, certain manual and biological controls are the best way to go.

These worms reproduce faster when they get the right moisture and detritus for food in their surroundings.

So reducing decaying organic matter available for the consumption of millipedes can help with the problem.

There are also certain parasites that feed on millipedes. Nematodes are one of the common types of parasitic worms that can get rid of millipedes.

Studies in South Australia have shown that nematodes in the soil can help with a significant reduction in the millipede population.

However, one problem with nematodes is that they take quite some time to reduce pests in the soil. It might be a few years before you see a reduction in the number of worms in the soil.

Can Humans Eat Them?

You might squirm with disgust at this question, but this world is a vast place full of fascinating cultures and tastes.

And one such group is the Bobo people from Burkina Faso. These people consume specific species of millipedes.

Studies have shown that millipedes have certain nutritional value; they contain a fair bit of protein, iron, and calcium in them. Therefore, millipedes are not a bad food source in places lacking nutrition.

While it is not proven that the worms can be safe as food, the Bobo people from Burkina Faso do consume them as part of their diet.

What is the fastest way to get rid of millipedes?

Are millipedes good to have around?

Millipedes can be great beneficial insects to have in your garden. These insects feed on decaying organic matter that helps to speed up the decomposition process.
In this way, they help with removing dead leaves, plants, and flowers and make way for new ones. The decomposition process also helps increase the soil’s nutrient value.

Do millipedes have prey?

Millipedes are not really hunters. They are scavengers that feed on organic material like leaf litter and plant matter.
They also feed on decaying animal and plant matter that they can find on the ground. In captivity, you can offer them all this and fruits and vegetables also.

What makes millipedes go away?

There are a number of ideas you can use to keep millipedes away from your home and garden.
Sealing air vents and wall cracks can be the first thing to do to prevent them from entering your home.
In the garden, using essential oils on the plants can also efficiently remove them from the garden. Using biological controls like nematodes and spiders might also be a good idea.

We have all seen the multi-legged creature crawling through our house once in a while. But did you know that millipedes have only three pairs of legs when they hatch?

That does not sound so bad for a little worm. These creatures are not a threat to you, and co-existing with them should not be a big problem. Moreover, mother nature has created several predators who naturally take care of these bugs for you.

While we tried to cover most predators of millipedes in the article above, nature always has more surprises to throw at us.

Our readers have shared with us various interesting predators of millipedes over the years. Do have a look!

Subject: bug/larvae attaking and eating millipede
Location: Tehachapi CA
November 27, 2013 12:50 pm
Hi there bugman, last night I was out letting my dog go to the bathroom when he started rubbing on the ground. When I checked what he was rubbing against, I found a millipede being attcked or grabbed by some type of larvae. I caught the 2 animals and now the millipede is dead with its head off and the larvae eating away at it. The larvae looks segmented with six legs, black in color with the sides a dark brown. I have never seen this before so I wanted to know what it was. The third picture is showing the bug eating the millipede inside the head.
Signature: Angel

Dear Angel,
If you checked out this dramatic occurrence in darkness, you might have noticed the predatory larva glowing, because it is a Glowworm.  Glowworms prey upon Millipedes and we have nice documentation on our site of an eastern Glowworm eating a Millipede.  Your species if probably a Western Banded Glowworm, Zarhipis integripennis, and you may verify its identity on BugGuide.

Thank you very much, Daniel Marlos. What is interesting is that I checked the bug guide and it says that these bugs are active during Jan-Feb, but it is late November and getting really cold. Well anyway, thanks again for your help. 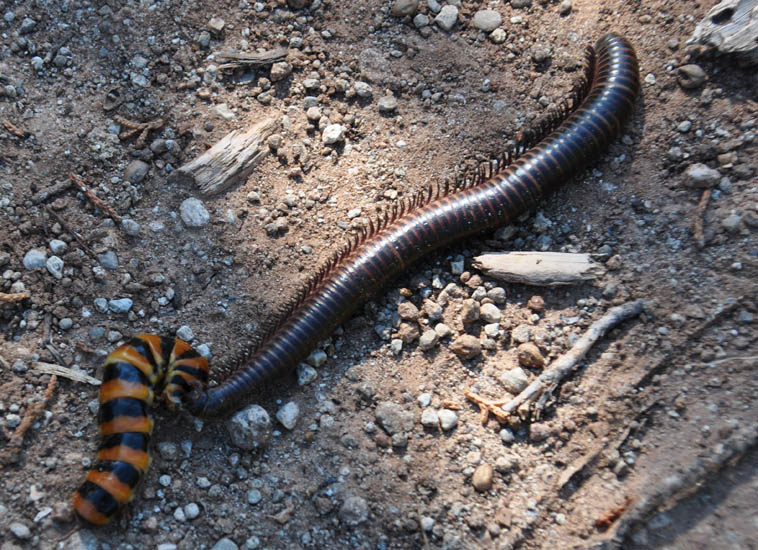 Dear jcochran,
Thank you for sending us your excellent documentation of a Glowworm eating a Millipede.  Glowworms, which are the larvae of beetles in the family Phengodidae, are also called Railroad Worms because of the bioluminescence. 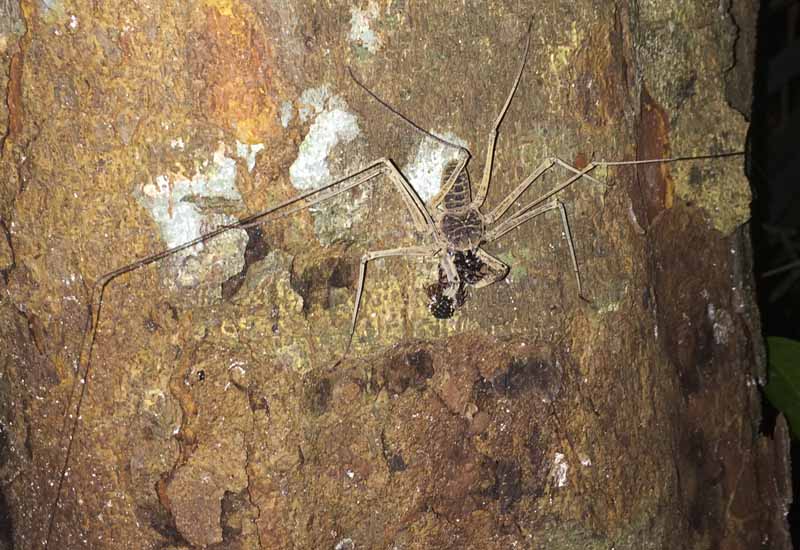 Subject: Tailless whip scorpion eating millipede
Location: South Mexico – Jungle
September 23, 2014 4:46 am
I have been reading (and loving!) your site for many many years and have never had anything to submit because I live in the UK where we do not have an abundance of large and/or exotic insects and where, due to my interest in all things bug, I tend to already be able to identify many critters. In fact I’m a little bit of a “bugwoman” myself, to my family and friends at least, who often save photos to ask me about. I have learnt much of what I know from your amazing site.
However, I recently returned from a wonderful trip to Southern Mexico where I spent much time in the jungle and encountered many wonderful creatures of the six, eight, and more legged variety.
I thought you might enjoy this picture of a tailless whip scorpion eating a millipede for your food chain series? Apologies for the photo quality I took these with my camera phone (the macro lens being shamefully hogged by my less insect-loving companion!).
Signature: Long time avid WTB reader

Dear Long time avid WTB reader,
Thanks for sending us your excellent image of a Tailless Whipscorpion feeding on a Millipede.  The quality of your image is much higher than most images we receive.  Regarding your comment about the fauna of the UK, we are surprised as there are many interesting creatures to be found in your location.  Though it contains some adult content, you may enjoy the film Angels and Insects, an adaptation of an A.S. Byatt Victorian novella. 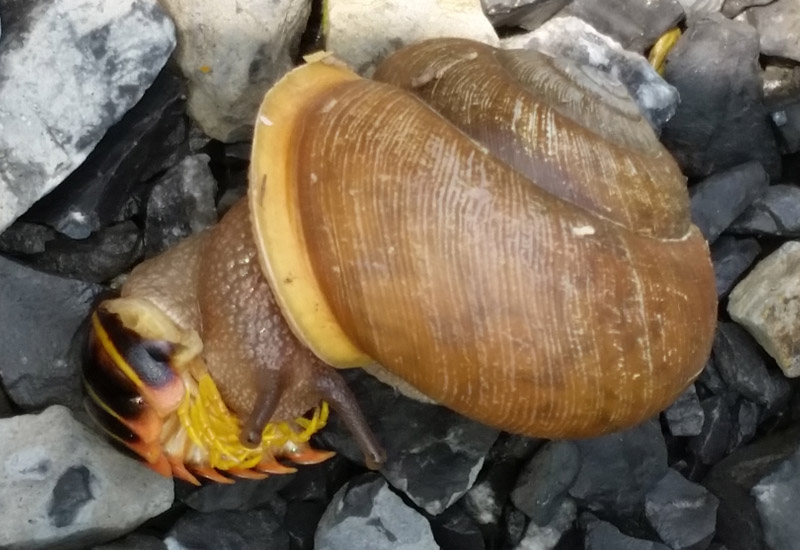 Subject: Snail eating millipede
Location: Harpers Ferry, WV
May 23, 2016 5:24 pm
I thought you guys might like the picture I took this morning of a snail eating a millipede. Enjoy!
Signature: Barb

Dear Barb,
There is a similar image on BugGuide, but we think yours has more attractive subjects.  We don’t know if this is a native Snail or an introduced species.