Did you see a unique fly with a golden band in your garden? These are Mydas flies, and this article will tell you what do Mydas flies eat.

So, you’ve found Mydas flies in your garden, and you might be wondering what they eat.

Finding weird insects in your garden can always be concerning if you don’t know about their feeding habits.

Pests that feed on plants and leaves can cause significant damage to gardens and agricultural fields.

Thankfully, none of the 80 species of Mydas flies you’ll find in North America would harm your plants.

They feed on pollen, nectar, and grubs. In this article, we’ll be exploring in depth about these beautiful black flies.

A Bit About The Mydas fly

As you might expect, Mydas flies belong to the order Diptera, i.e., flies. The name Mydas fly isn’t a particular fly species – it’s the common name for the entire Mydidae family of flies.

They are common garden insects, with the winged adult resembling wasps to some extent. The different species of Mydas flies share certain common visual characteristics.

They’re dark in color – usually black or tan. These flies are characterized by bright red, yellow, or orange marks on their abdomens.

Mydas flies have one pair of wings and a pair of pads under each foot. Interestingly, they have clubbed antennae – a feature that’s rather common to butterflies than flies.

Why Are They Called Mydas Flies?

You may have already guessed that the name of this fly family has some connection with the Phrygian King Midas.

Well, in that case, you have guessed correctly – the flies have been named after King Mydas.

As the story goes, King Mydas had achieved the magical power of turning anything he touches into gold.

The colorful band on the abdomen of Mydas flies often looks like a shade of golden orange, hence the connection.

What Do Mydas Flies Eat?

Don’t worry; the Mydas flies in your garden won’t devour your beloved plants. They mostly sustain themselves on nectar, pollen, and insect larvae.

This also makes them a beneficial species, both as natural predators and pollinators.

Having them in your garden certainly isn’t a bad thing since they can help your garden grow by helping with pollination.

We haven’t found any evidence of adult Mydas flies feeding on other insects so far.

During the larval stage, Mydas flies are effective predators of soil-dwelling larvae of other insects.

Mydas fly larvae live in the soil, preying on grubworms and other beetle larvae. They help keep the pest population in control and can therefore help protect your garden.

Like most flies, Mydas flies aren’t quite high up the food chain. They’re constantly in danger from a variety of predators.

Birds are among their biggest enemies since they can easily pick off the flies without the latter even getting a chance to fight back.

Being one of the most powerful insectivores, frogs are capable of hunting Mydas flies too. Certain parasitic wasps prey on Mydas flies and use them as hosts for their offspring.

They inject their eggs into Mydas fly pupae. Wasp larvae that hatch from the eggs feed on the pupa and kill it.

How Do Mydas Flies Defend Themselves?

Although Mydas flies are preyed upon by plenty of predators, they possess an impressive ability to defend themselves.

They’re capable of mimicking dangerous or poisonous insects that their predators would rather avoid. Known as Batesian mimicry, this ability can be found in various species in the insect world.

The Mydas fly usually mimics spider wasps to scare away its predators. To achieve this, it displays a bold flight pattern similar to spider wasps.

If necessary, it can even jab its abdomen to mimic the stinging motion.

Are They Dangerous To Humans?

Mydas flies aren’t dangerous to humans in any way. They resemble wasps to some extent, which is why people often find them to be scary.

However, you may rest assured that despite their resemblance, Mydas flies aren’t capable of stinging. Insect encounters with new insect species might be scary, but now you know that these mystery insects are completely harmless.

There’s no need to fear Mydas wasps coming to your garden – you may even get close to them without risking getting stung.

Mydas flies can neither bite, nor sting you. Although they resemble wasps and even mimic spider wasps specifically, they’re completely safe to be around. Mydas flies are just a species of harmless flies that go around your garden, feeding on pollen grains and nectar.

What is the largest fly in the world?

The largest fly in the world belongs to the Mydas family.
Scientifically known as GauroMydas heros, they grow up to 1.3 inches to 2.8 inches as adults and have a wingspan of up to 4 inches.
Their structure, together with their size, allows them to mimic hornets as a form of defense.

How big can Mimic flies get?

Mimic flies usually range between 0.25 inches and 1.25 inches in length. On average, most mimic fly species grow up to an inch.
However, some species are larger, including GauroMydas heros – the world’s largest fly. As mentioned earlier, these can grow up to 2.8 inches in some case

Where does the Mydas Fly live?

Mydas flies are rather common in North America. You may find them in forests, woodlands, grasslands, and various other habitats.
They also love hot, sandy habitats, where the females often dig into the soil to lay eggs.
In the wild, you may also find the larvae of Mydas flies near rotten wood, where they can easily find beetle grubs to prey on.

In the event of garden insect sightings of a species unknown to you, it’s only wise to be careful until you know whether it poses a threat.

However, despite their visual similarity to the wasp family, Mydas flies won’t hurt you.

Considering the roles that they play as pollinators and natural predators, we’d recommend leaving them be. Thank you for reading, and we hope we have been able to sate your curiosity.

Our readers have often sent us emails requesting us to identify this gorgeous insect, and over the years, we have created a repository of photos and information about it.

In many of these communications, we were asked about what these flies eat, with some rather humorous questions and others quite serious ones. Read on, and see for yourself. 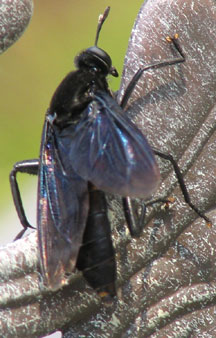 Hi bugman!
First, I must tell you.. I love your site – fascinating stuff! Second, I have two bugs I can’t identify. Bug1 is a huge scary looking thing (to me anyway) 2 to 2.5 inches long at least. Bug2 is very pretty.. I love the long legs and antennae. Can you help? I live in Northern Virginia (Fauquier County) about 50 miles west of DC near the Blue Ridge Mountains. Thanks for your time!!
Danette Jennings


Hi Danette,
Your first insect is a Mydas Fly. Adults are predatory, feeding on caterpillars, flies, bees and Hemipterans. Your other insect is a female Katydid. 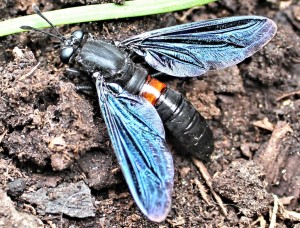 Subject: Blue winged insect Location: Niagara area, Southern Ontario July 3, 2012 1:11 pm I live in the Niagara area of Southern Ontario and found this guy in my garden. It is just over an inch long and the wing is almost 3/4 of an inch. Any idea what it is? Signature: P.Skinner Dear P. Skinner, The wings of this Mydas Fly are reflecting the beautiful color of the sky.  The wings are not actually that blue, but the dark surface is perfect for enhancing the saturation of the colors reflected in them. Thank you so much for identifying this guy for me. I have never seen one before and he was beautiful. Thanks also for featuring him as ‘bug of the month’. Very cool. 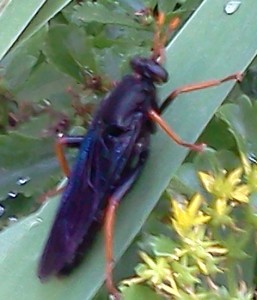 Subject: Digger wasp variant? Location: Philadelphia, PA suburbs July 3, 2012 1:20 pm Hello, I noticed this wasp the other day and was struck by its appearance, as I do not usually see wasps this large except for the occasional cicada killer. I researched it online and as close as I could tell it was a digger wasp, specifically sphex nudus. However, in all the photos I have seen none have the orange antennae like the one in my picture. The wasp was also over an inch long. Signature: Aaron Trzeciak Hi Aaron, This is a fly, not a wasp, and it is very easy to mistake a large Mydas Fly for a wasp.  We just posted a photo of another species of Mydas Fly, and your individual is Mydas tibialis which we identified on BugGuide. 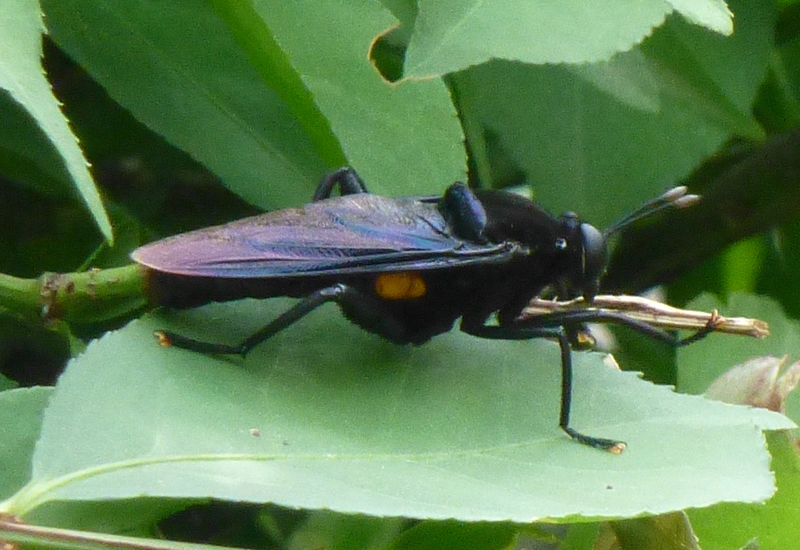 Subject: What is this beautiful guy? Location: Columbus, OH July 3, 2013 8:44 pm Saw him on our burning bush out front. Didn’t want to get too close. Guessing a solitary wasp/fly of some kind? Thanks for any help! Signature: Thanks, Nick Dear Nick, The Mydas Fly, Mydas clavatus, that you submitted is a very effective wasp mimic, but we are not entirely certain of the connectivity of this species to other orders in the Complex Web of Life. 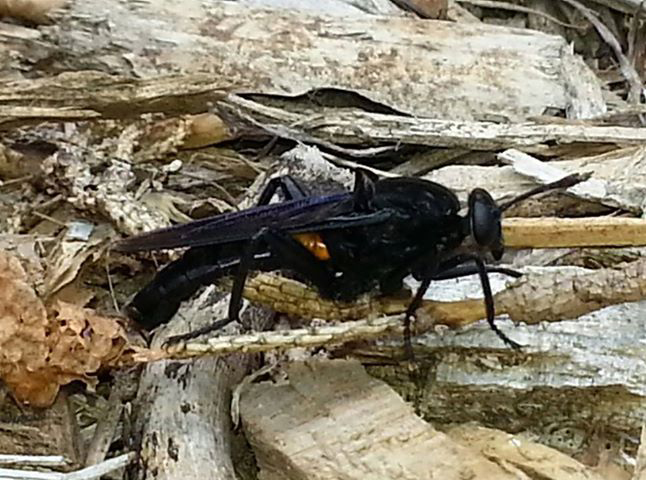 Subject: Dangerous bug or not? Location: Rhode Island July 17, 2013 3:24 pm Dear Bugman, I have this insect that looks like a type of wasp that has been hanging around my daughter’s swing set. We built a wooden frame and placed wood chips/mulch in it for the swing set area. The insect wasn’t aggressive and it let me take some close up pictures with my cell phone. I just want to make sure it is safe since it is spending a large amount of time around her swing set. I tried googling images and didn’t realize there are SO many types of wasps. Could you please help? Signature: Sincerely, Though it effectively mimics a stinging wasp, this is actually a harmless Mydas Fly. 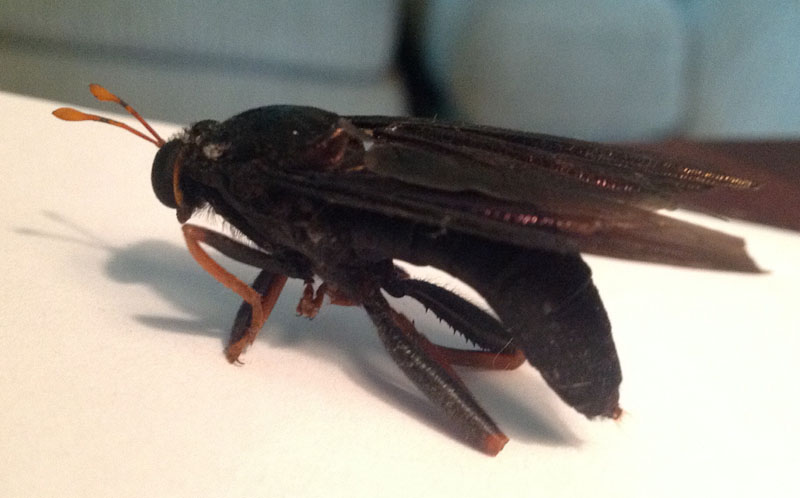 Subject: Large wasp like insect Location: Pennsylvania July 13, 2014 8:56 am This bee is 1.5 inches. We need it identified for a school project. If you have any information, please let me know! Signature: -A Dear A, This is a Mydas Fly, Mydas tibialis, and we verified its identification on BugGuide.

3 thoughts on “What Do Mydas Flies Eat? Truth Revealed”