Asian Lady Beetles can enter houses during the winter, so it is important to know what they eat and whether they are dangerous to you.

Say what you will about ladybugs; they might be one of the prettiest bugs hanging out in your garden. The native species are bright red with black spots and the subject of many children’s rhymes.

Their distant cousins, the Asian Lady Beetles, are equally colorful spotted beetles and have become common in some areas of North America.

They are also known by other names like Harlequin beetles. There are nearly 5,000 species of lady beetles around the world.

In this article, we will talk about these colorful creatures and, specifically, what they eat.

What Are Asian Lady Beetles?

Asian Lady Beetles are a type of ladybug native to countries like China, Japan, Russia, and Korea. They traveled to America a few decades ago and have become common in several states.

The average adult Asian lady beetle is dome-shaped in appearance and flat on the bottom. This convex shape makes them appear like orange mushrooms when seen from above.

The body of a Lady Beetle is a quarter-of-an-inch long and half-an-inch wide. They have different colors (red, orange, and yellow) and black spot patterns that can help differentiate them from each other.

How to Identify Them?

The Asian lady beetle is very similar to native ladybugs, so it can be hard to distinguish them. One difference is that they are slightly longer with bigger bodies.

Asian lady beetles have about 19 spots on their back, some well-defined and others in faint traces on their wings. They have more spots than their native cousins.

If you are trying to recognize the Asian beetle, the most definitive thing to look for is a white ‘M’-mark (or W-mark, depending on which way you look at it) behind its head on black background. This mark can be thick, thin, or even broken, but it only exists on the ALBs.

The larvae of the Asian lady beetles are shaped like very tiny alligators. This is a very similar look to any other beetle larva.

They can be blue or black, usually with two orange stripes. These larvae also have rows of small urticating spines throughout their bodies.

What Do Asian Lady Beetles Eat?

Asian lady beetles mainly feed on soft-bodied insects that they usually find on the surface of plants. These insects consist of various insect pests like aphids, meal bugs, and spider mites.

Adult beetles also eat the eggs and larvae of these insects.

An adult ALB can feed on upto 100 aphids in a day. Larvae of the Asian lady beetles can eat nearly 600 to 1200 aphids during their growing stages. Their propensity to eat pests makes them a friend to farmers and gardeners.

The larvae of these bugs develop over four stages, so they need nutrition from aphids and cannot survive on a plant-based diet.

By the time they grow into adulthood, an average beetle will have consumed nearly 5000 aphids.

Where Do Asian Lady Beetles Live?

They are normally found in open fields of various crops like corn, roses, tobacco, and soya beans. They are common in summer and start dispersing as autumn sets in.

Lady beetles are attracted to light/dark contrasts, often infesting homes and buildings. They look for sheltered areas like wall cavities and attics to hibernate in the winter months.

These are places where they overwinter, trying to save themselves from cold weather.

Should I get rid of Asian lady beetles?

Ladybeetles can become a problem if they enter your home in large numbers. It is best that you get rid of them before there is a large-scale infestation.
These bugs can secrete a sticky yellow substance that can damage your precious clothes and bedding. Moreover, they are biters and can leave a painful bite. To stop their entry, make sure to fill cracks in your walls and window screens.

ALBs can bite. Apart from that, these bugs do not cause any major harm to humans or pets directly.
However, they have a tendency to come inside homes in winter in swarms.
They are invasive house pests that leave a sticky yellow substance on your clothes that causes an unpleasant odor.

Lady beetles eat fruits only when they find something that has an opening.
These bugs try to find fruits that have been pre-eaten by birds or other insects, where they can find an easy way into the fruit.
Their favorite food is usually apples, and they like them ripe.

The diet of adult Asian lady beetles consists mainly of aphids and other pest insects, which is why they are known to be a natural pest control for agricultural crops.
These bugs do not eat the leaves of plants directly. They will try to feed on aphids and pests that are found on the surface of the leaves, which can sometimes damage the leaves.

Asian Ladybugs are an invasive species, swarming your home and entering inside in the winter season. On the other hand, they can also be beneficial insects friendly to gardeners because they eat away all pests.

So the next time you spot these pretty insects flying about, it would not be such a bad idea to let them stick around in the garden. Just make sure they don’t find a way to get inside the house.

Considering how big of a menace ALBs can be, it’s important to note that they can also be beneficial in the garden. Read some of the experiences below to understand how these bugs are a two-edged sword. 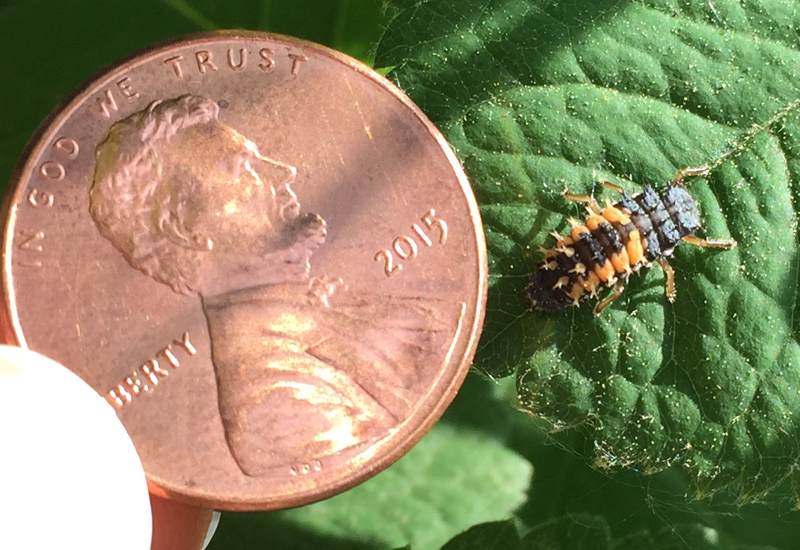 Subject: What IS this? Location: Upstate New York June 4, 2016 6:14 pm Hello! I live in Upstate New York (the Hudson River Valley, to be more precise), and this spring, I started noticing these strange bugs in my yard. I’ve never seen them before this year, but I’m finding them ALL OVER THE PLACE. They are super strange, and I’m hoping you can help me out! Thanks! Signature: Sara Dear Sara, This is the larva of a Lady Beetle, and both larvae and adults feed on other insects.  They are generally considered to be beneficial as they eat enormous quantities of Aphids.  Your larva appears to be that of the Multicolored Asian Lady Beetle, Harmonia axyridis, an introduced and invasive species, based on this BugGuide image.  Though they help control insect populations, they are crowding out native species of Lady Beetles, reducing their populations.  Adult Multicolored Asian Lady Beetles often enter homes in great numbers to hibernate, creating quite a nuisance for homemakers.  We will be postdating your submission to go live to our site next week while we are away from the office. 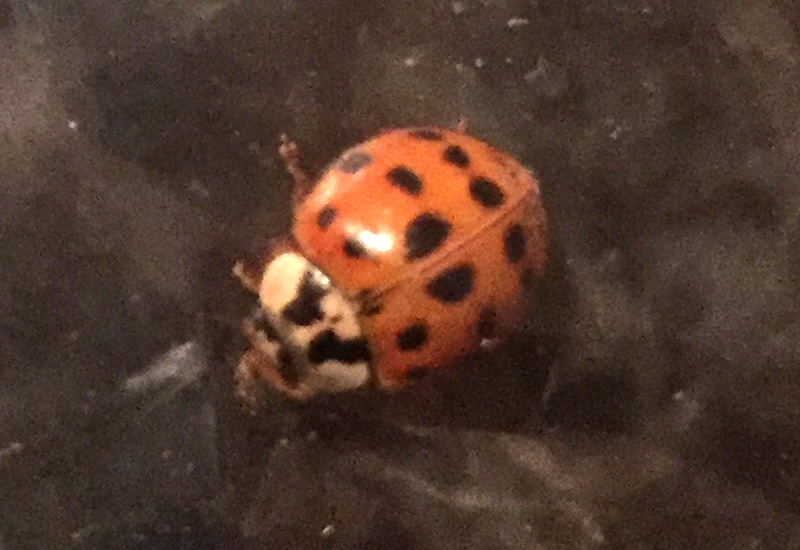 Subject: Lady bug cousin? Location: Boulder CO November 6, 2016 10:34 pm What do you think this is? Found on bedroom curtain. Spouse did return from trip but also has 2 welts that look like tiny dots inside a big welt on torso & back that itch some. We live in Colorado, it’s been warm here almost 70. We have pets & doors open often. Signature: Bugged Out Dear Bugged Out, This is a Multicolored Asian Lady Beetle, Harmonia axyridis, a highly variable species that was introduced from Asia many years ago.  It is a species prone to forming large aggregations and also known for moving indoors as the weather cools to hibernate.  Its proliferation is believed to be a contributing factor to lower populations of native Lady Beetles.  It is possible to be bitten by predatory Lady Beetles, but we suspect the welts on your spouse are from another creature.  See BugGuide for more information on the Multicolored Asian Lady Beetle. 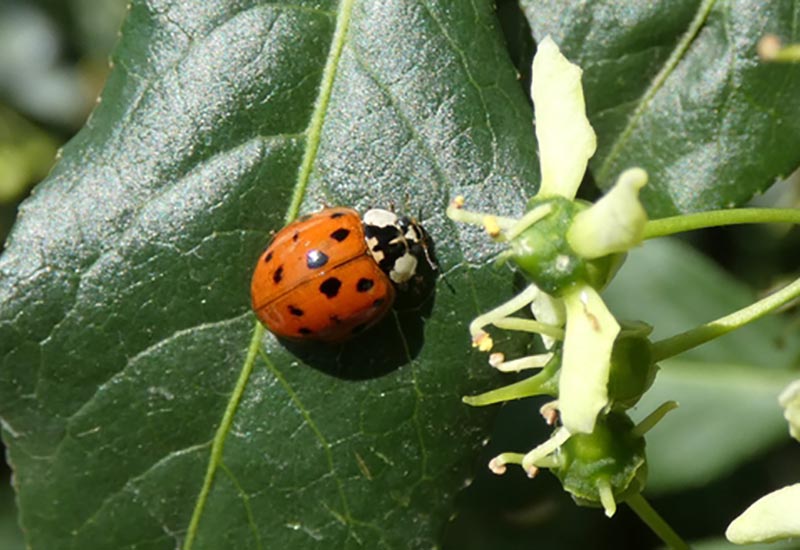 Subject:  12(?) spot & 0 spot ladybirds (ladybugs) Geographic location of the bug:  Abruzzo, Italy Date: 05/07/2019 Time: 03:30 PM EDT Your letter to the bugman:  Hi guys I am currently visiting friends, and prowling their woodlands. Spotted these little beauties and would be very grateful for an ID. Thanks How you want your letter signed:  Fof Dear Fof, Your spotted beetle is a Multicolored Asian Lady Beetle which is pictured on BugGuide and which is found in Italy according to Wikipedia.  Your second beetle, the one without the spots, is not a Lady Beetle.  It is a Leaf Beetle in the family Chrysomelidae, and we believe we have correctly identified it as Chrysolina grossa on BioLib and on TrekNature where it states:  “Chrysolina grossa is a Mediterranean species, associated with Labiatae of the genera Mentha and Satureja.”
Hi Daniel
Thank you very much, for your very fast response, and, above all, for the information.
Regards
Fof

Subject:  Black Ladybug? Geographic location of the bug:  Ventura, California Date: 08/06/2021 Time: 01:04 AM EDT Your letter to the bugman:  Dear Bugman, I have been seeing so many fabulous bugs this summer but mostly practicing mindfulness and present moment awareness and haven’t captured many pictures for you to identify- but this evening on a neighborhood walk I spotted a black ladybug (?) and wondered if that is a thing? How you want your letter signed:  Melanie on the Irish Chain Dear Melanie on the Irish Chain, Based on this BugGuide image, this is the “Conspicua Form” of the Multicolored Asian Lady Beetle, Harmonia axyridis.  The common name refers to the extreme color variations possible in this introduced species, including the familiar orange with black spots, but the number of spots may vary, the background color ranges from light to deep orange, and often the spots are absent.  Of the “Conspicua form” BugGuide states:  “A melanic (darkly pigmented) form of Harmonia axyridis. Entirely black with a white central head marking, two rounded pronotum markings, and two red or orange elytral markings. Occasional extreme variants may have reduced or absent white markings on the pronotum.  The extended black pigmentation forms a layer over the usual pattern. Thus, sometimes the standard pattern shows through. In these cases, a black spot from the usual form will show over the red marking, creating a crescent or C-shaped spot.” Your individual displays the “C-shaped spot.”

2 thoughts on “What Do Asian Lady Beetles Eat?”