Finding a large long tailed bug near your house is surely a cause for concern. However, its likely that the wasp with long tail may be ichneumon, a gentle giant with no intention or means to hurt you. Let’s learn more about these wasps below

If you see a giant black menacing-looking wasp with a long tail in the park, garden, or near a trail, it is most likely a black giant ichneumon wasp (Megarhyssa macrurus).

Despite their appearance, these wasps are actually benign and even beneficial to the garden. They are not aggressive and don’t bite humans.

These wasps are particularly famous for their long ovipositors, which many confuse for stingers, but are actually only useful for laying their eggs.

The female ichneumon wasp bores a tunnel using her needle-like ovipositor into stumps of dead wood and lays her eggs on the larvae of pigeon horntail wood wasps.

When the egg hatches, it eats the host larvae and then pupates in the wood until it is time to fly out and reinitiate the process. 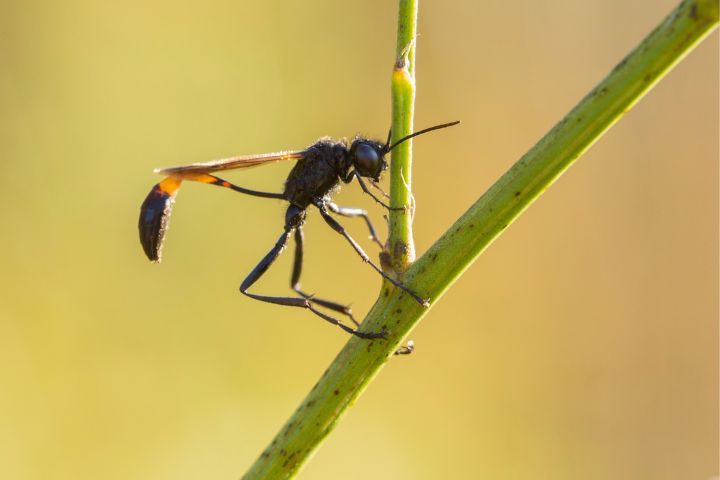 Do They Bite or Sting?

No, as we mentioned earlier, these long tailed wasps do not bite or sting. These wasps do not have stingers at all.

In fact, many people’s first reaction when they see them is that they are encountering a wasp with long stinger, but that’s not the case at all.

The females of this wasp species have five-inch long ovipositors, which are used to lay eggs.

These ovipositors can bore through wood and can be deadly to the host they are parasitizing but are not useful against humans or other predators.

The poor males don’t even have the ovipositor!

Can They Spread Disease?

No, black giant ichneumon wasps do not spread any disease known to man. They are mostly harmless and typically don’t interact with humans at all.

Unless you specifically try to frighten them or handle them, they will show no interest in you. In fact, these flying bugs with long tails are actually beneficial to humans in many ways.

They help in removing wood wasps from your property, which can be a big nuisance since they attack your outdoor wood surfaces and leave behind holes, scratches, and dents.

Are They Harmful to Humans or Pets?

No, these wasps are not harmful in any way to humans or pets. Even though you might think that having a wasp with long tail near your home might be dangerous, there is absolutely nothing to worry about if you see one of them.

They don’t live very long (just about 27 days), so there’s no need to make efforts to remove them, either. 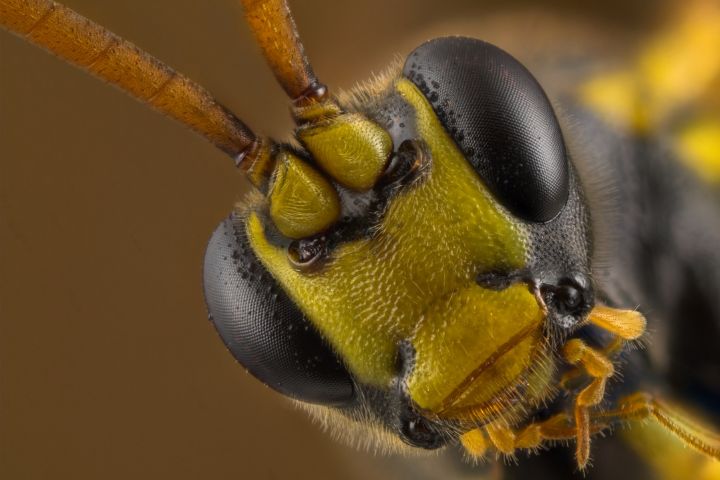 Can They Get In The House?

It is unlikely that these wasps would fly into your house. They only hover around trees with dead wood since their purpose after emerging as adults are to mate and lay eggs.

Their larvae feed on the pigeon horntail wasp larvae, making sure to leave the essential body parts till the very end so that the meat remains fresh.

Since the larvae of these wasps with long tails pupate and overwinter inside the tree itself, they don’t have to take shelter in your home to protect themselves from cold weather.

During the summers, the adult wasp only sits on trees and doesn’t even need to make a nest.

How To Get Rid of Them?

If you see a giant ichneumon wasp in your garden or yard, there is absolutely no reason for you to remove it or get rid of it.

These bugs are not harmful to humans, they don’t bite or sting us, and they don’t feed on anything in your garden.

Moreover, they help remove pigeon horntail wood wasps and other small insects from your yard, so they are beneficial to gardeners.

They don’t make nests like other wasps or bees and are solitary bugs, so you will never see a swarm of these bugs attacking you.

All in all, we suggest that you just let the wasp be. It will hopefully leave your garden for its final abode within a month, anyway. 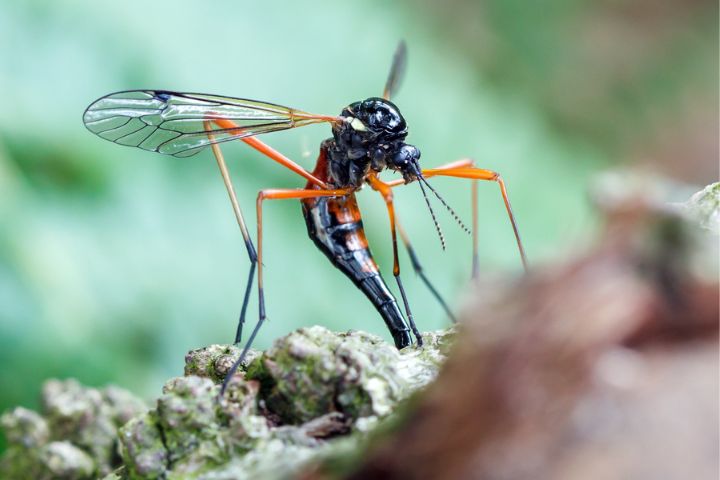 Where Do They Lay Their Eggs?

Black giant ichneumon wasps are parasitoids. As we mentioned earlier, they like to lay eggs on the pigeon horntail wasp lava.

These larvae are usually found inside dead wood. The giant ichneumon female wasp searches for them using her long antennae, hoping to hear some vibration from the movement of the wood wasps’ babies.

When she is sure of it, this flying bug with long tail takes out her ovipositor and drills into the wood. Over the course of three to four hours, she is able to penetrate the wood precisely at the location where the wood wasps larvae are present.

Next, she injects these larvae with a venomous sting (don’t worry, their venom is not powerful enough for humans) and paralyzes them.

She then deposits her egg outside the larvae’s now paralyzed body, and after a few days, when the eggs hatch, the ichneumon larvae make a meal of the wood wasp larvae.

The egg-laying activity usually happens during the June to September months, but the larvae take their own sweet time to feed. They then pupate and overwinter, spending the winter season inside their cocoons.

In the summer or spring months, they emerge as adult ichneumon wasps and restart the process. 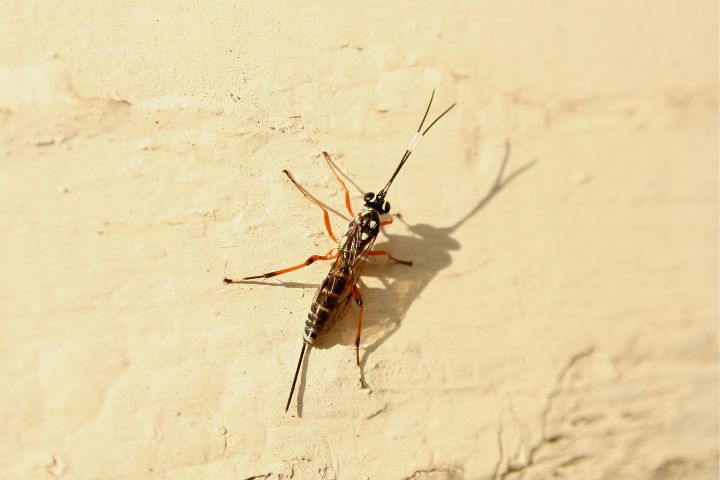 What Are They Attracted To?

There is one sure-shot way to attract these wasps with long stingers – to have dead wood around the house.

Since their primary purpose as adult wasps is to reproduce, these guys are always on the lookout for dead wood bearing the larvae of pigeon horntail wood wasps.

Their natural habitat is deciduous forests, but rapid deforestation by human activity has caused them also to inhabit some areas where humans are living, such as parks and gardens.

Over the years, we have received dozens of emails from our readers who have seen these beautiful but fearsome long stinger wasps (which turned out not to be a stinger at all!).

Let’s revisit some of these letters below.

large wasp-type bug with long ‘tail’
November 17, 2009
This bug came in when we opened our back door one evening a few nights ago. Sorry, my husband squished it. The envelope it’s sitting on is a business-sized (10 inch) envelope for size reference. It’s very dark or black with a long jointed looking body, black wings and the really long tail that totally creeps me out. 🙂
Scaredy Cat
North Texas/DFW

after reading your site for over an hour the night that I posted, I learned the purpose of that long tail thingy. Wish we wouldn’t have squished her. It was fear-induced carnage. 😉 With 3 cats and 2 children she probably wouldn’t have lasted long anyway!
Thanks for responding and confirming what I found on your site. We also have great photos of a wooly caterpiller that looks like what the Japanese Monster Mothra was based upon. 🙂 Can we just submit photos even when we know what the bug is?
Kim

Hi Kim,
You may submit photos, but please use our question form and provide your location.  Also, please do not submit more than one species of insect per letter.  We are very happy to hear you were able to make your identification without our assistance.

32 thoughts on “Wasp With Long Tail May Be Ichneumon”