Tarantula hawks are one of the most unique and intriguing wasps in the world. In this blog, we look at the tarantula hawk life cycle and some of its unique behavioral traits.

The Tarantula Hawk belongs to the Hymenoptera order and the Pepsinae subfamily.

They are a type of parasitoid spider wasps. These wasps each choose a specific spider to lay their eggs on, paralyze it, and when the larvae hatch, they eat the very spider that was hosting them.

As the name suggests, tarantula hawks have chosen tarantulas for this job.

They have evolved long, spindly legs with claws at the bottom, which help them pick up their prey, who are seven to eight times bigger than them.

They also have one of the most venomous stingers in the wasp kingdom, enough to paralyze an average-sized tarantula in one sting.

Found on almost every continent except Europe and Antarctica, these creatures are powerful, glittering danger signs for tarantulas.

This spider wasp most definitely doesn’t share your wide-eyed fascination or passive curiosity when it comes to tarantulas. Unlike other bugs, it has a complete life cycle.

Before pupating, it molts through several instar stages. Pupation lasts about 2-3 weeks before the new adult tarantula hawk emerges.

Let’s look at the life cycle in detail.

The process of laying eggs starts with the female tarantula hawk finding prey to lay her eggs.

When she finds one, she directs her very poisonous sting at the large nerve ganglion responsible for the movement of the legs and fangs of the tarantula.

Her poison inactivates and permanently paralyzes it. The wasp then drags its prey into the specially made nest, where it lays an egg in its abdomen.

The female tarantula hawk is extremely powerful. Dragging spiders that are eight times their size is no small feat!

She puts the tarantula in a chamber inside its burrow (which the wasp might have either dug herself or borrowed from others). Then, she lays an egg on the spider and seals the entire tunnel with dirt.

After completing her motherly duties, the wasp sets off to seek yet another prey for her eggs.

A typical female tarantula haw lays about 13.4 eggs, so the mother wasp needs to similarly the same number of tarantulas during her lifetime.

In a few days, the egg hatches into a first-instar larva that starts by feeding on the blood of the paralyzed spider.

The larva grows over the next 20 to 25 days, molting its skin four times before reaching the fifth instar.

During this time, it eats the spider’s muscle, blood, fat, reproductive system, and digestive system. However, it makes sure that the nervous system and heart remain in place.

This helps to ensure that the meal is always fresh!

The fifth instar now uses up the remainder of the spider before it spoils. When the larva’s food supply runs out, it pupates.

This stage might very well last only a few weeks before the adult emerges. Later on in the season, the wasp cocoons and overwinters until the following spring.

Adult tarantula hawks, both male and female, suck nectar from flowers and are known to prefer milkweed flowers in particular.

Growing up to two inches in length, the tarantula hawks have a visible orange coloring on their blue and black bodies.

The female tarantula hawk has a 0.3-inch stinger. Males of the species don’t have one, even though they pose as though they are aggressive.

The most commonly found species of tarantula hawk is – Pepsis Thisbe, found in the Grand Canyon. Spotted thriving in places that have an abundance of their prey, these spider wasps

Identifying the nest of a tarantula hawk is a pretty easy task. The female builds a nest or digs a burrow on the ground.

Appearing as a small hole in the ground of approximately 1-2 inches, the female prefers to use natural crevices and cavities to build a nest.

After incapacitating the tarantula, the spider wasp drags it down to its nest, where it lays an egg and covers both the egg and the spider with dirt.

Mating is initiated by the male tarantula hawks. Adult males engage in “hill-topping,” i.e., they establish mating territories on hilltops, ridgelines, or other prominent high points.

Males compete with each other for the best spots, and the larger males generally win the best territories near the center of the territory.

Once their territories are established, the males sit on their vantage points and wait for the females to fly by.

Virgin females come to the hilltops to find mates. They mate only once and then move on with producing eggs and finding tarantulas to feed them.

Justin Schmidt – the renowned American entomologist, author of “The Sting Of The Wild,” and the man behind the Schmidt sting pain index, gave an account of the iridescent tarantula hawk sting.

Describing it as three minutes of excruciatingly fierce pain that left the victim reeling, he also compared it to the feeling of having a running drier being dropped into your bubble bath!

Another researcher vividly recounts the feeling as a very immediate and unrelenting pain that restricts you from doing anything but scream due to the immense pain.

The tarantula hawk’s painful stings successfully inactivate and paralyze the spider within mere seconds, earning itself a spot on the top in the most painful and venomous stings in the world.

The extremely potent spider wasp sting only rivals the sting of bullet ants.

Apart from their powerful sting, these wasps show aposematism, ie their glittering orange wings and blue bodies are warning signals to potential predators.

This is known as aposematic coloring and is found in other groups of insects as well.

These two reasons are enough to deter most predators, and the only ones who dare fight these wasps are roadrunners and bullfrogs.

Tarantula Hawks, in general, are non-aggressive and don’t sting humans unless provoked.

How Long Does It Take For A Tarantula Hawk To Grow?

The larvae are ordinarily fully grown three weeks after the egg hatches. They then pupate for approximately 15-20 days, emerging as adult moths after overwintering.
Adult females can live for almost an entire season, but males only live for a few weeks. They make the most of their time on earth by mating and thus preparing another generation of tarantula hawks.

How Big Do Tarantula Hawks Get?

Tarantula hawks are extremely large wasps, larger than almost any others of their species, except perhaps for the female Asian giant hornets.
The Pepsis thisbe, species of tarantula hawks, can grow to be as big as 2 inches long. These spider wasps have stingers that can be as long as 0.25 inches.

How Do Tarantula Hawks Reproduce?

Using the hill-topping behavior, male tarantula hawks find spots on the tallest points of plants to wait for potential mates.
They establish leks at such high points where they compete for the best territories. When the females fly by these leks, they copulate with the ones on the highest points and produce eggs.

Where Do Tarantula Hawks Live?

More than 250 species of tarantula hawks are known to inhabit the tropical areas of South America. These wasps reside in all continents of the world except for Antarctica.
They prefer to remain in desert surroundings where they can find their favorite prey, tarantulas, easily. Male adults have a few weeks to live, whereas females can live for four to five months.

The tarantula hawk is known for its poisonous and incapacitating sting. But in reality, this wasp is not very aggressive towards humans or other animals.

Apart from what it does to the poor tarantulas, this insect does not cause harm to anybody and is a beautiful sight to behold.

A glittering vessel for the most potent of poisonous stings, the tarantula hawk shows us how survival is not a piece of cake. It is cruel, unforgiving, and unforeseen. Thank you for reading!

Our readers have often sent us pictures identifying the tarantula hawks and asking us about their lifecycle. Sample some of the emails below. 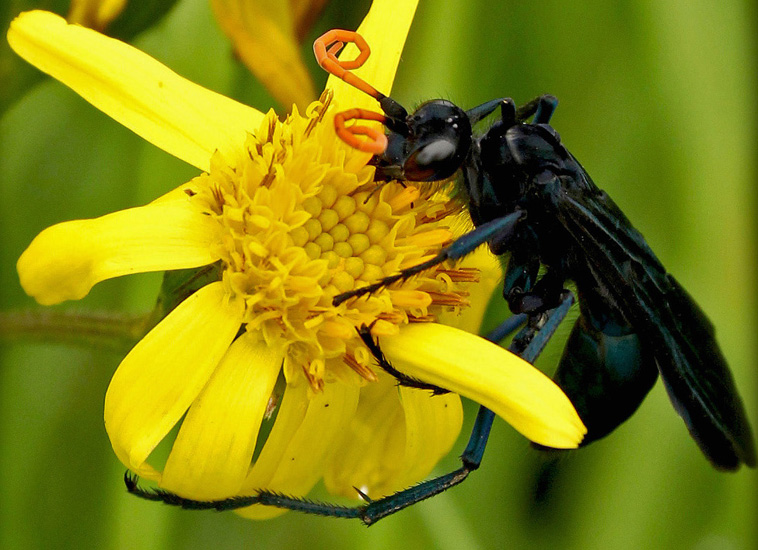 Subject: Bee/Wasp (?) from Peru
Location: Coastal Peru
January 6, 2014 6:24 pm
Dear Bugman,
today’s identification request refers to this flying insect from coastal Peru. It was pretty big and I was really in awe of it’s orange antennae and the length of its behind legs. Thank you again for your great help!
Signature: Frank 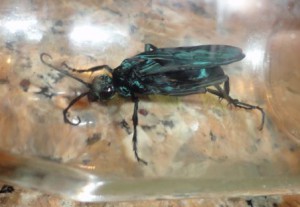 Subject: Tarantula Hawk
Geographic location of the bug: Mount Washington, Los Angeles, California
Date: 08/01/2019
Time: 10:26 AM EDT
Daniel was out working in the yard when he spotted a large, metallic green wasp well over 1 1/2 inches in length.  Alas, there was no camera handy and the wasp quickly flew off after running on the ground for a few seconds with an agitated style and its wings quivering.  Upon some research, and comparing images on The Natural History of Orange County and on BugGuide, Daniel believes it was a Tarantula Hawk, possibly Pepsis mexicana, and that is why this image from our archives is being used to illustrate this new posting.