If you see a wasp flying around with flakes of grass in its legs, it could be a fairly intimidating site. But don’t worry; here’s how to get rid of grass carrying wasps from your home and garden.

The grass-carrying wasp is best known for carrying blades of grass to outline their nest and insects like tree crickets to feed their larvae.

They build their nesting material above the ground, usually in wood cavities, abandoned insect galleries, and hollow plant stems.

Thus, it is pretty easy to find a grass-carrying wasp cocoon in your home’s wooden areas or garden.

Even though this type of wasp isn’t aggressive toward humans, it can be annoying because it builds its nests in the frames of storm windows.

So, sometimes, it is necessary to get rid of them. In this article, we discuss how you can do that.

A native of North America, these wasps are a common site across several American states. They are from the genus “Isodontia.” To identify these wasps, just look for the following features:

How The Grass Carrying Wasp Prepares Her Nest, and Why It’s a Nuisance?

The adult wasps usually come out in July and August to mate and prepare the nest site for the larvae. These wasps are parasitoids; they lay their larvae on insects that then feed on the same.

Their nests are made in stems of plants that have been hollowed out or similar nests made by other wasps.

She leaves the nesting material outside the spot and enters inside to check if everything is alright. She then pulls the material in to prepare the nest.

Once she is done with the nest, her next task is to find food for the larvae.

She usually hunts tree crickets from nearby gardens. She first captures the cricket and paralyzes it with her sting.

Once the prey becomes immobile, she would fly it into the nest. Even though her prey becomes paralyzed, it continues to be alive.

After provisioning the nest with food, the female wasp lays eggs in the nest. Once the larvae emerge, it eats up the immobile insect, making sure to eat the brain and heart the last.

Even though these wasps are non-threatening to humans, they are nuisance pests.

They may sting human skin if provoked or threatened by any means. They also end up building cocoons in places like the frames of storm windows, which need to be then cleaned out.

Do These Wasps Sting?

The grass-carrying wasps are usually non-stinging insects, but they may sting in rare cases, that is, if they feel threatened or provoked.

However, their sting is not harmful unless you are allergic to insects. If you have a history of insect allergy, it is advisable to seek medical help.

Grass wasps are beneficial insects. Since they consume nectar from various flowering plants, they are pollinators.

They also help you eliminate tree crickets from your garden, which can otherwise be a nuisance due to the sound they create in the evening.

Some of them may even damage your plants though most crickets are not garden pests.

How To Remove Them Naturally?

Grass-carrying wasps can be annoying to the point that you may get rid of them from your home. If you are looking to remove them naturally, here are a few ways.

Stop them from coming inside your house

The best way to remove their entry in your garden or house is to block or seal their entryways. They usually enter from cracks in door frames, vents, torn screens, window cracks, dampers, etc.

So, cover these passages with cardboard, wooden covers, louvers, or anything that would stick for a long time.

Most grass wasps enter the house in search of protein-rich food. So, make sure to get rid of leftover food by removing it from garbage bins.

You should also make pet food, open compost piles, and uncovered garbage bins or containers untraceable for these wasps.

Avoid bringing or keeping sweet fruits or juice in the garden or around the wood cavity area.

Remember to remove or throw away garden fruits, especially those fallen from trees. The wasps will leave soon if they cannot find what they are primarily searching for.

Grass-carrying wasps love to feed on nectar from flowering plants and, sometimes, cannot tell the difference between them and a human wearing vibrant colors.

So, make sure to dress appropriately during the ‘wasp’ season.

Moreover, grass-carrying wasps are attracted to the smell of flowers as well.

So, avoid wearing strong fragrances during the spring season, mainly if you can easily spot grass wasps around your house.

Do you know that wasps can fly up to 3,000 ft from their nests? If they find a food source in and around your house, getting rid of it will be pretty challenging.

In case you have a similar situation in your place, it is advisable to put on wasp traps at several places.

You can either use DIY traps or buy them from the market. Spring is the best time to introduce a good quality wasp trap in your house.

Since grass wasps are solitary; they wouldn’t build their nest next to other wasps or insects.

When you hang a fake wasp nest, they won’t develop their site close to it and instead find another nesting site.

When you squash a wasp, they release a chemical that attracts other wasps in the area.

So, when you end up squishing them, you invite a whole population of wasps to show up at your door. Make sure not to attack or squish wasps.

Plant herbal plants in and around your house, such as eucalyptus, citronella, thyme, and spearmint. These plant herbs naturally repel wasps like grass-carrying wasps.

Where do grass-carrying wasps live?

Grass wasps live in wood cavities, abandoned insect nests, or hollow plant stems.
They can often be found in window and door cracks. One area they are particularly fond of is the frames of storm windows.
So, make sure to seal these areas to block their entrance.

How do I get rid of digger wasps?

To get rid of digger wasps, clean your lawn regularly and get rid of pests that are their primary food source.
You can also mulch your garden about three inches deep to eliminate digger wasps. Another way is to spread a thin layer of gravel on the soil so they can’t make a nest for themselves.

Will wasps sting you while mowing?

Even though many wasps do not sting on purpose, they may end up stinging you if provoked or threatened.
Mowing the garden may seem threatening to them, and they may sting you.
However, most commonly found wasps stingers are not very painful to humans and do not cause any permanent damage.

How does vinegar get rid of wasps?

Mix vinegar with dish soap, water, and granulated sugar in a bowl.
Now, pour them into a bottle, and spray them on the wasps that annoy you.
The solution will kill them within minutes. Vinegar is slightly acidic and reacts with its exoskeletons, while also attracting them with its smell.

We hope this article will help you get rid of grass-carrying wasps from your surroundings.

We recommend you follow natural ways to remove them from your home since pesticides poison the environment.

Keeping wasp traps or fake wasp nests is one of the easiest ways to avoid having to deal with these wasps.

Due to their annoying habit of making their cocoons in window sills, these poor wasps have often been the subject of much scorn from our readers.

Read through some of the emails below to see why people want to get rid of, what is essentially, a beneficial insect. 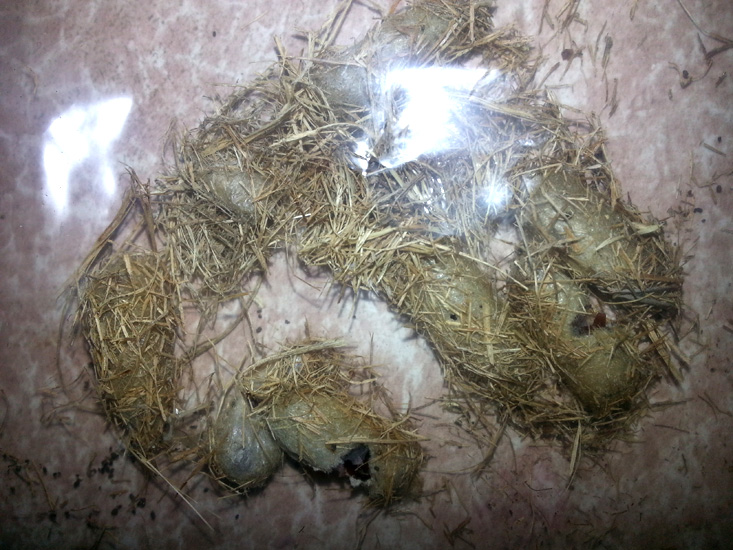 Subject: What kind of nest is this
Location: Hudson, NH
February 15, 2014 12:33 pm
I found these today in the slots in my window were my screen would go. I only have half screens so the top never has anything in it.
Signature: Angela

Dear Angela,
We believe this is the nest of a Grass Carrying Wasp in the genus Isodontia.  According to BugGuide:  “Females make nests in a tree, hollow stem or other cavity, divide into sections and close with grass. They provision with Orthoptera (Tettigoniidae, Gryllidae)” and “These wasps commonly make their nest in the narrow track found above outer windows.”  We cannot tell if the nest in your photo has been provisioned with Crickets.  The female Grass Carrying Wasp paralyzes the cricket which remains immobile, but alive, as the wasp larva feeds upon it.

Nice question Dee.  This is speculation on our part.  Based on information on Grass Carrying Wasps that is available on BugGuide:  “Taken from the Internet Reference below (Penn State): The adult wasps emerge from their cocoons in early summer, mate, and the females locate a suitable nest site. She collects blades of grass and grass and hay stems to line the nest cavity. The wasp can be seen flying through the air with the blades trailing beneath her. She lands at the hole and enters, pulling the blade in behind her. After the nest is prepared, she hunts for tree crickets (i.e., Oecanthus sp.), captures and paralyses them with her sting, and transports them to the nest. She deposits eggs in the nest and the emerging larvae will feed on the living, but immobile crickets. When the larvae reach the appropriate size (in 4–6 days at 70–75° F.), they spin a cocoon and pupate. The adult wasps emerge in 2–3 weeks. In Pennsylvania, Isodontia mexicana typically produce two generations per year.”  We would suggest mid to late June as a time to consider clearing out nests from the previous year, however, if you notice pupae as you are cleaning out the windows, you may want to delay the clearance a few more weeks.  We have added your question to a recent posting on the nests of Grass Carrying Wasps. 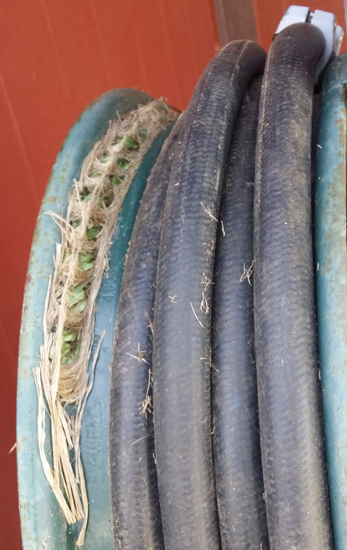 Subject: Isodontia mexicana?
Location: South Central Texas
June 6, 2016 6:26 am
Howdy Bugman – I think we have the Frank Lloyd Wright of Grass-carrying wasps. Can’t think of anyone else that will appreciate this as much as me – happy Monday. 😀
Signature: Debbie Littrell Ventura

Dear Debbie,
That is one impressive Grass Carrying Wasp Nest.  Will you be suspending use of your hose until after the emergence?

Sure going to try. My garden hose using spouse is not nearly as impressed, but I’m working on his sensibilities. Have a fab week, Daniel. 😀 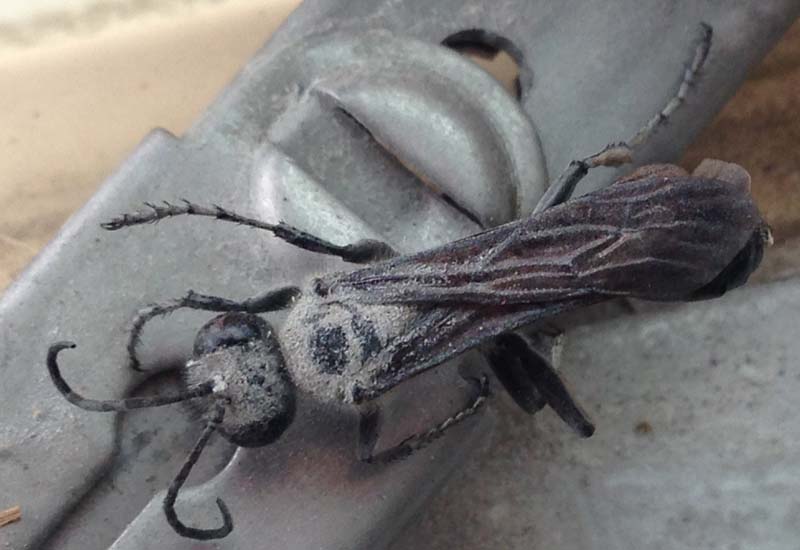 Subject: Big black wasp?
Location: Toronto, ontario
July 23, 2017 10:02 am
Hi, we have seen a few of these flying around and going in between the windows. We we removed the inside screens to take a look we found lots of hay and something that looks like is was eggs and a big nest. What should we do to stop this
Signature: K & D

1 thought on “How To Get Rid Of Grass Carrying Wasps? Helpful Tips”