Flour beetles can damage your stored foods very quickly. If you find flour beetles in bedroom, you should take quick action. This article will tell you what to do

These beetles are about ⅛ – 3/16 inches long and can live up to three years.

If you find them in your bedroom, you should dehumidify the room and then vacuum it to clean any food products, grains, or pet food that may attract these pests.

You should also conduct a pantry inspection to ensure you are not dealing with an infestation.

What Are Flour Beetles?

Flour beetles are pests that attack and thrive on grain products. As mentioned earlier, there are two main types of these bugs.

Also known as the Tribolium castaneum and Tribolium confusum, respectively, these beetles are nearly identical in appearance.

The larvae of these reddish-brown beetles are yellowish-white and slender and usually feed on powdered grain products instead of whole kernels.

The beetles go from eggs to larvae, pupae, and then mature adults in an average life cycle of about 40-90 days. Adult beetles can live up to three years.

How To Tell The Difference Between Red Flour Beetles and Confused Beetles?

Even though the control techniques are the same, you can differentiate between them through specific physical characteristics.

What Damage Do They Do?

They are also infamous for infesting museums and feasting on old museum specimens, which makes them very dangerous for preserved artifacts.

The flour beetles have mouth parts to chew, but they do not bite or sting. They do not transmit any diseases or damage furniture or structures.

However, the red flour beetle may cause an allergic response.

Red flour beetles will often attack broken grains and other food items and can cause an infestation and damage food products.

The confused flour beetles, on the other hand, primarily feed on things made of starch, such as flour, cereal, pasta, etc. They can also be found feeding on dried flowers, herbs, and potpourri.

What to Do About Flour Beetles in The House

If you’re spotting flour beetles in your house, the first thing to do is check your pantry for an infestation. Then, dehumidify and vacuum your home to get all the flour beetles out.

Make sure you do a thorough inspection because these beetles are attracted to areas with high moisture content and any kind of food grain.

Red Flour Beetle in Bedroom – What Should You Do?

Red flour beetles are usually found in food storage places such as pantries.

The red flour beetles are notorious pests that could quickly cause an infestation. They can cause severe damage to food products and can also cause allergic reactions in some people. Here is what you need to do

What To Do If You Find a Red Flour Beetle in the Bathroom?

Bathrooms tend to have a high moisture content, which is why you might find red flour beetles crawling around. These critters thrive in moist environments.

So the first thing to do would be to vacuum your bathrooms clean. Make sure there’s nothing in there that is attracting these bugs to feed.

Next, insecticides like aerosol sprays do an excellent job of killing these beetles. You can spray it and get rid of the beetles.

For future prevention, ensure your bathroom is always clean and food crumbs aren’t lying around.

Also, seal all crevices and cracks to prevent these bugs from entering.

Confused Flour Beetle in Bedroom: What Can You Do About it?

Even though there are differences between the red flour beetle and the confused flour beetle, the techniques to control them will be the same.

You can employ the same dehumidification techniques, vacuuming, and inspection to eliminate and control the infestation. You could also use aerosol insecticides to get rid of these pests.

What Can I Do if I Find Flour Beetles All Over My House?

You might be dealing with an infestation if you see flour beetles all over your house. The first thing to do in that case would be to run an inspection and find the source of it.

Throw out anything that has these tiny creatures crawling in it. Thoroughly vacuum the whole house, including every tiny nook and crack.

You can also dehumidify the house to make it less convenient for these insects to survive.

For future prevention, make sure you keep your space clean. Run regular checks on your stored food, and be careful while buying packaged food.

How To Get Rid of Flour Beetles Naturally?

Getting rid of flour beetles is also possible by employing some natural remedies.

How To Get Rid of Flour Beetles Home Remedies

You can lay the food item out in the sunlight to eliminate the beetles. You can also use a non-toxic aerosol insecticide to kill the bugs.
Freeze your flour or spice packets immediately after purchase for four days. This will kill any larvae or eggs if present. You can also use natural bug repellents like bay or neem leaves, cloves, garlic, ginger, and turmeric.

Why do I have flour beetles in my house?

Flour beetles are pantry pests and attack food sources. They also thrive in moisture. So if your house is highly humid, it’s likely these beetles are attracted because of that.
They could have also come through a recently purchased infected food packet. Conduct an inspection to find the source and then vacuum and clean to eliminate the bugs.

Where do beetles hide in your room?

Beetles can hide inside food packets like rice, wheat, and cereals. They also don’t like sunlight so you will find them in dark and humid spots.
You should also check crevices in pantries and storage where there’s a spillage of grains. These spaces prove to be thriving environments for flour beetles.

How long does it take to get rid of flour beetles?

It depends on how you choose to get rid of them. If you’re freezing food packets, four days is the advised timeline to kill the bugs.
If you’re putting it out in the sunlight, you should leave it until you see no sign of flour bugs in the food. It should be a relatively quick process if you choose to vacuum and spray insecticides.

Flour beetles – red and confused are equally notorious pests. They attack pantries and food storage spaces and can cause massive damage to stored goods. They can also multiply quickly, so in their case employing prevention tactics are essential.

There are both natural and other ways to get rid of these beetles. You can employ the method that you find apt for your situation.

Flour beetles have been infesting houses forever, and our readers are not free from their menace. Read below a few emails from readers looking for solutions to this menace and our advice to them! 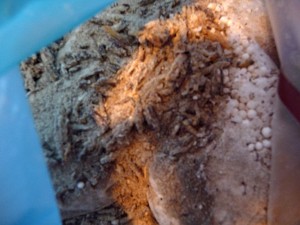 pantry pest Location: Maryland, January, in kitchen cabinet January 22, 2011 4:38 pm I just found these in some rice and other long stored grains that were in plastic bags in one of my kitchenm cabinets. It looked like a mouse had eaten through the bags, but there have been no signs of mice. I have cats so I would have known. The photo of the messed up food is what was inside the bag looked like. It smelled almost like cat urine, but there had been no cats in there. The beetles are just over 1/16 inch long. I couldn’t even tell they had segments or legs until I took the photos. Nothing seemed to be moving until I looked at one with a magnifying glass and it wiggled a little. I haven’t checked the rest of my cupboards yet. Sorry the photos aren’t great. Signature: Maryland Dear Maryland, It is difficult to be certain, but it appears that your Pantry Beetles are Flour Beetles in the genus Tribolium.  You may compare your photos to images posted to BugGuide.  A more detailed closeup image that shows the antennae would be helpful for a more certain identification. Thanks for your help. I do believe you’re right. As I continue to go through my cabinets if I find any more with antennae intact I will definitely look closely at the antennae. I love your site. Mary Sue 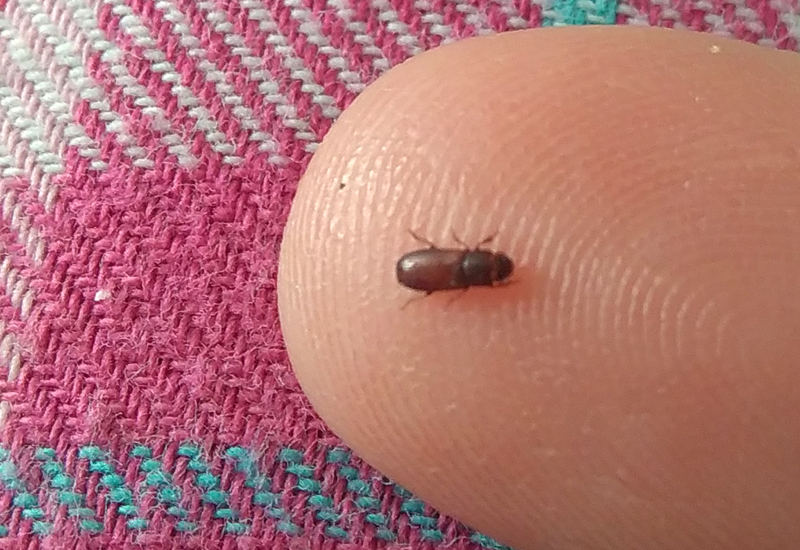 Subject: please identify this bug Location: sheffield uk April 20, 2016 1:09 am Hi I have been finding these insects in my newly built house, and really need to know what they are and how to remove them, can u help?! Thanks Signature: stacey Dear Stacey, Small beetles like this found in the home are generally either wood boring species or pantry pests.  We believe your individual is a Flour Beetle in the genus Tribolium.  According to Pied Piper:  “Both the confused and red flour beetles, known as “bran bugs,” primarily attack milled grain products, such as flour and cereals. Both adults and larvae feed on grain dust and broken kernels, but not the undamaged whole grain kernels. These beetles often hitchhike into the home in infested flour and can multiply into large populations. Some survive on food accumulations in cabinet cracks, crevices, and furniture. Confused flour beetles are the most abundant and injurious insect pest of flour mills in the U.Kingdom, United States and Australia. They do not bite or sting humans or pets, spread disease, or feed on or damage the house or furniture.  In addition to milled grain products, beetle specimens have been found in barley, breakfast cereals, corn, cornmeal, crackers, flour, millet, oats, rice, rye, wheat and wheat bran, nutmeats, dried fruits, legume seeds, beans, milk chocolate, cottonseed, peas, powdered milk, sunflower seeds, vetch seeds, spices, herbarium and museum specimens” so you may want to check the pantry for the site of the infestation.

10 thoughts on “Flour Beetles In Bedroom – What To Do? 9 Steps To Removing Flour Beetles”