The eastern dobsonfly is one of the few that are native to the states. Learn all about this mammoth and fearsome-looking insect in the article below.

Dobsonflies, even though named such, aren’t true flies. Just like Alderflies and Fishflies, these insects belong to the order Megaloptera. They grow and live in aquatic environments.

Dobsonflies are largely nocturnal and can be spotted around water bodies.

Both the females and males can grow up to 5 inches in size and have a lifespan of around 3- 10 days, with the females living longer than the males.

Eastern Dobsonflies are of the order Megaloptera, genus Corydalus and species Cornutus are aquatic insects that aren’t true flies.

While their larvae (called hellgrammites) feed in nature and are a crucial part of the aquatic food web, the adults simply mate and lay eggs. They also have a very brief lifespan, just a few days.

Their larvae are the top invertebrate predators in rocky streams and have gills to breathe underwater and spiracles to breathe on land.

These demon-like small insects feed on the larvae of fellow aquatic larvae, such as blackflies and caddisflies. They may also feed on small fish.

While there’s no evidence to indicate that adult dobsonflies feed in nature during their brief lifespan, some researchers believe they do consume nectar. When bred in captivity, you might feed them a honey-water mixture.

There are around 30 species of dobsonflies around the world, with three more in addition to the eastern dobsonfly found in the US.

Adult males have long mandibles that appear similar to a sickle and may look dangerous but actually aren’t capable of inflicting any pain. They also cannot pierce human skin. These mandibles are largely to attract females and hold them during mating.

On the other hand, female dobsonflies have smaller, sharper mandibles that can pierce human skin and inflict a sharp bite.

The dobsonfly larvae can grow up to 2 ¾ inches in size and are light brown in color. They, however, appear darker in color because their bodies have dark brown micro-spines, and the thoracic is covered with black dorsal plates.

What Is Their Life Cycle?

Adult dobsonflies have a lifespan of around 3-10 days, with the females outliving the males. But the larvae take 1-3 years to go through all stages of larval and pupal development and emerge as adults.

Adult female dobsonflies lay eggs on leaves or rocky surfaces around water bodies and fast-flowing streams. A white-colored substance is laid by the mother on top of the eggs which stops them from getting too hot during sunny days.

Dobsonfly eggs hatch 1-2 weeks after being laid, during nighttime. After hatching, the larvae fall or crawl into the nearby waterbody. The dobsonfly larvae, also called hellgrammites, have gills that help them breathe and survive underwater.

They live under rocks in streams and feed on the larvae of fellow aquatic insects. They are among the top invertebrate predators in aquatic environments.

When it’s time to pupate, the hellgrammites leave the waterbody and find a suitable place under a rock or log near a water body. Here, they dig a cell into the moist soil to prepare for pupation since they have no silk glands to weave a silk cocoon.

Where Are Eastern Dobsonflies Found?

Dobsonflies are aquatic insects spotted near water bodies such as rocky streams. Adults lay their eggs near these water bodies, and their larvae develop underwater till it’s time for pupation.

There are around 30 species of dobsonflies, most of which can be found in South America. Only four species, including the Corydalus cornutus, can be found in the western US.

The eastern dobsonfly is largely distributed throughout the eastern parts of North America and on the eastern side of the continental divide.

Apart from the US, dobsonflies are also found in Africa, Asia, and Australia.

Dobsonflies can bite when mishandled, but the effects of the bite are not long-lasting, and it’s a rare occurrence.

Male dobsonflies have large, curved mandibles that may look scary but are incapable of piercing human skin.

However, the pincers of the females, though smaller in size, are far sharper that can pierce human skin. But they largely aren’t a danger to humans.

How Are They Useful For Humans?

Dobsonfly larvae are a crucial part of the food web. They contribute to controlling the numbers of other invertebrates found in aquatic environments by being the top invertebrate predators in flowing water bodies.

They also serve as food for bigger predatory fishes and hence are sometimes used as bait during fishing. They are also preyed upon by other bigger invertebrates in the water and by some vertebrates on land.

Dobsonfly larvae are important to the bio-monitoring health of streams as well because they’re usually found in cleaner and unpolluted water bodies.

Can you hold a Dobsonfly?

Yes, you can hold a dobsonfly but carefully. As with any other insect, you have to handle it gently. If mishandled, the dobsonfly may bite.
The long and intimidating pincers of adult males are not capable of causing damage, but the small mandibles of females are far sharper and can pierce human skin.

The adult dobsonfly is nocturnal and lives only for a few days, thereby limiting threats from external predators. However, they may get preyed upon by fishes in the streams or birds and bats.
The dobsonfly larvae are preyed upon by bigger fish and other invertebrates in the water. They’re also often used as bait during fishing.

Is a dobsonfly a dragonfly

Where do dobsonflies lay their eggs?

Dobsonflies lay their eggs in clusters on a rock or log of wood near a flowing stream or water body. These egg masses are covered with a white substance for protection.
Once the eggs hatch, the larvae fall into the stream or crawl into it, where they continue to grow and develop for 2-3 years till it is time for them to pupate.

How does a dobsonfly defend itself

Dobsonflies are aquatic insects belonging to the order Megaloptera. Though named flies, they are not true flies. Their larval stages, called hellgrammites, are crucial to the aquatic food web and environment.

The adults have a brief lifespan of up to 10 days, during which their purpose is to mate and lay eggs. They’re not harmful to humans as long as they’re handled gently.

Over the years, our readers have had several sightings of the eastern dobsonfly and its infamous larvae.

We have captured some of these in the letters below. Please go through and see firsthand how fearsome and huge these bugs can look, and also go through the experiences of those who have handled them at close quarters. 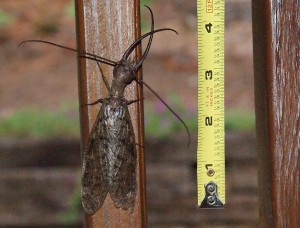 What’s this bug? Location: North Georgia mountain town of Ellijay GA August 20, 2011 7:01 pm I live in the north georgia town of Ellijay. What’s this cute guys name? Thanks Gerry Fazzari Signature: best regards Hi Gerry, This magnificent insect is a male Dobsonfly.  Female Dobsonflies have much less prominent mandibles.  We are quite certain that your photo will give nightmares for weeks to come to a few folks visiting our website for the first time to get some “huge” home intruder identified.  They will probably also experience a sense of relief that their earwig or ground beetle is nothing compared to what they grow in Georgia (and many other parts of eastern North America). 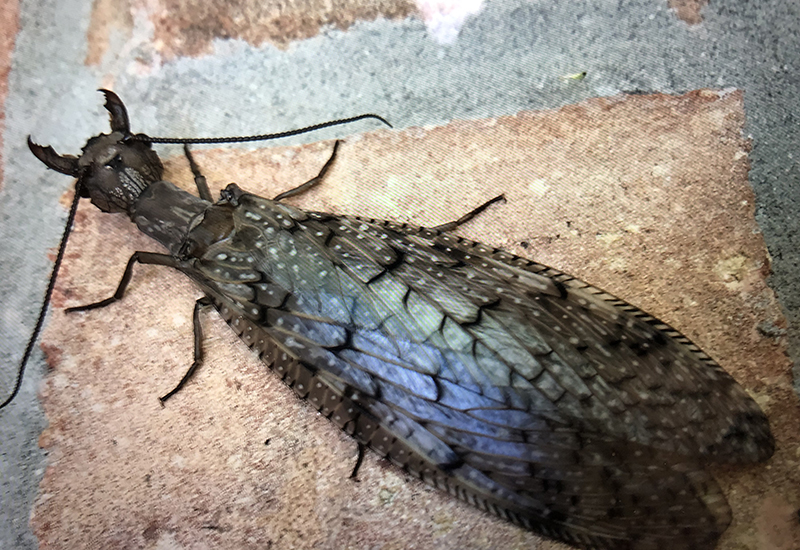 Subject:  Borer Beetle? Geographic location of the bug:  Ayr, Ontario Date: 07/24/2019 Time: 09:41 PM EDT Your letter to the bugman:  Saw this guy on the side of our house at the end of July. About 4”-5” long. How you want your letter signed:  Alex Hi Alex, We are being bombarded with identification requests for Corydalids today, but your image is the first we have received of a female Dobsonfly, and the image is so beautiful, we have to format it for posting.  Though the mandibles of the male Dobsonfly look much more frightening, they are specialized for allegedly fighting off other males as well as during mating, but they are not useful for either eating or defending from a threat.  The mandibles of the female Dobsonfly are much more utilitarian, and she can easily defend herself by painfully nipping at a threat, including a person, but the bite is not dangerous.  Adult Dobsonflies do not eat. Hi Daniel, Thanks for the quick response! Your website has created a whole new world of backyard research for me. I’ve been doing lots of reading on these guys since I saw your response. Feel free to use my picture for anything that you might need. Cheers, Alex Hi again Alex, We are happy to hear our site has inspired you to do more research into the wonderful creatures that surround you.

3 thoughts on “Eastern Dobsonfly: All You Need To Know”