In this article, we look at some of the differences between a drugstore beetle vs carpet beetle: two similar-looking common pests that infest different parts of your home.

Drugstore beetles and carpet beetles: the two may look similar, but they have many subtle differences that are quite intriguing to learn.

While one is found munching on dry foods and in pill boxes, the other lives under your feet in carpets and rugs.

Let’s explore what brings together and separates drugstore beetles and carpet beetles.

What is a Carpet Beetle?

Carpet beetles, as the name hints, are pests that infest carpets. Apart from carpets, you may also find them feeding on items like wool, fur, silk, feathers, etc.

The adult carpet beetles are about ⅛ inches in length and are often confused with cotton moths. They have oval-shaped bodies with different color patterns, ranging from black to yellow, red, and orange.

The larvae have elongated bodies with patterns of red or light brown color. They are hairy and vary in size until they reach adulthood.

What is a Drugstore Beetle?

Drugstore beetles, also known as biscuits or bread beetles, are fascinating features that feed on stored food sources in your pantry or kitchen, such as cookies, cereals, flour, etc.

The unique thing about them is that they also infest non-food items like wool, pet food, fur, leather, paper, medicines, and other non-food items.

A typical adult beetle is a reddish brown with a 1/10-inch long body. It resembles cigarette beetles.

The main difference is that a drugstore beetle has a prominent hump that makes its head seem invisible from the top. Its larvae are c-shaped and grub-like, resembling white maggots.

How are They Similar?

The key similarity between a drugstore beetle and a carpet beetle is that they are both tiny insects with almost the same length.

Drugstore beetles have reddish-brown bodies, and carpet beetles also carry a shade of red. They are both common pests known for non-food infestations. They also share a similar life cycle.

For example, the lady beetle from both species lays about 50 to 100 eggs in the food source.

Both their larvae feed on non-food items like fur, leather, and wool, even though drugstore beetles also infest food products like bread, biscuit, cereals, flour, and more pantry items.

The eggs of both species are hatched somewhere between 10 to 20 days, and larvae immediately start feeding on the food items.

They can also be managed in similar ways, like vacuuming, discarding the food and non-food products once you notice the infestation, using insecticide aerosol, etc.

Drugstore beetles and carpet beetles both thrive in warmer environments.

Difference Between The Two

Drugstore beetles and carpet share many similarities, but if you look closely, there are differences as well.

In this section, we shall focus on the difference between the two based on their physical appearance, eating habits, regions they are found in, and of course, their life cycles.

To begin with, the drugstore beetle is slightly shorter on average (though the difference is negligible to the human eye).

The drugstore beetle has an oval-shaped body and is covered with thin yellowish hair. They are reddish-brown and have antennae with three-segmented antennae.

Most importantly, they have a pair of wings that help them fly. Most beetles don’t have wings – including carpet beetles.

On the other hand, carpet beetles have colors marking their bodies, ranging from black to orange, red, and yellow.

The larvae of drugstore beetles are white and grub-like, while those of carpet beetles are elongated, pale-colored, and somewhat hairy.

They also feed on items like paper, fur, leather, wool, wood, and more. They are known to be a major threat to museums because of their propensity to attack mummys and museum artifacts.

The larvae also eat the same items, though, since the adult beetle spends its life wandering and laying eggs.

The carpet beetle, as the name hints, infests carpets since the larvae consume keratin found in the carpets, which is an easily digestible protein for them.

Where They Are Commonly Found

The carpet beetle usually remains outdoors and also prefers warm weather. A carpet beetle infestation can usually be found in carpets, floor rugs, and so on.

They typically come out during the spring season to lay eggs. They can enter the house via food products and pollen.

The female drugstore beetle lays eggs in a food source for the larvae to feed right after the egg hatches. She can lay about 50 to 75 eggs, but they are impossible to detect with the human eye!

Once the eggs hatch, the larval stage continues for about 4 to 5 months, during which larvae feed on the food source and can even crawl into different packaging.

The pupal stage lasts for about 12 to 18 days, after which the adult is fully matured and continues the life cycle by wandering and laying eggs for the next four weeks.

The female carpet beetle can lay 50-100 eggs in a food source.

It takes 10 to 20 days for the egg to hatch and for larvae to come out and eat whatever is available. The larvae can, however, survive for weeks without consuming food.

The pupal stage depends on the surrounding temperature, which decides whether the pupal will transform into an adult and create future infestations or not.

If the conditions are not met, the larvae enter a state of suspended animation unless it is the right to enter adulthood.

How to get rid of drugstore beetles?

The best way to get rid of a drugstore beetle infestation is to vacuum the pantry or kitchen regularly.
Use insecticide aerosol or a DIY vinegar solution to spray on the infested area to eliminate the pests. You can also place bay leaves and peppermint in the cupboards to repel them.

Carpet beetles are a nuisance since they can infest carpets, fur, leather, and other items. They can also cause allergic reactions, including skin irritation and even dermatitis.
They damage the natural fibers of your precious carpets and rugs and can even infest your food items.

Are carpet beetles and bugs the same?

Carpet beetles and bugs are different. A carpet beetle has a flat, reddish-brown body, while a typical bug has an elongated body with tiny hairs resembling a caterpillar.
Moreover, carpet beetles are not true bugs; they are classified as a type of beetle (as the name suggests). They don’t have a pair of venous wings like most bugs.

Drugstore beetles can crawl and fly both. They can enter your house because they can quickly fly to new locations; thus, there is more possibility of infestation in your home.
One of the key reasons they can spread so quickly is because they can fly – they can move from the kitchen to the bedroom to the bathroom quite easily.

While both drugstore beetles and carpet beetles look very similar, there are a few main differences.

For one thing, the larvae of both species have different diets, as the names suggest – one infests pantries and drugstores, while the other feeds on carpet fibers.

Moreover, the two species look different when placed under a microscope drugstore beetles have a pair of wings, while carpet beetles don’t.

Over the years, several readers have shared anecdotes and pictures related to both these beetles, and one thing that we realized was that there is a lot of confusion regarding the two.

Since their length and activities are similar, the two bugs are often mistaken for each other. Do go through the emails below and see for yourself. 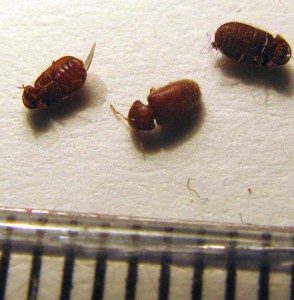 Bugs in Melbourne, Australia January 12, 2010 Dear Bugman, I was wondering if you could please help me identify these bugs. We have had many, many of them flying around our home in the past few weeks, and many are dead on the window sills. I cannot work out where they are coming from and am worried they might be borers, however could they be some type of food weevil? (Some of the legs and antennas have fallen off these dead ones, when I moved them to photograph) Sam Melbourne, Australia Hi Sam, Your letter is the third we have posted in as many days from readers with infestations of tiny beetles found in the kitchen, and all three were different species.  We believe your beetles are Drugstore Beetles, Stegobium paniceum, which according to BugGuide:  “larvae feed on prescription drugs, flours, dry mixes, breads, cookies, spices, chocolates and other sweets, plus a variety of “non-food” items (see Remarks section below)  adults do not feed.  … Remarks … Larval non-food material includes wool, hair, leather, horn, and museum specimens. Larvae have been known to bore into books, wooden objects, and, in some cases, tin or aluminum foil and lead sheets.“ We hope one of our readers can confirm this identification. 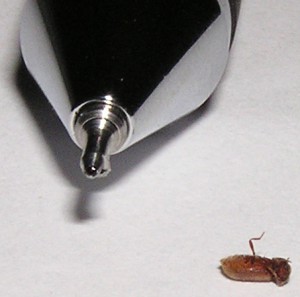 LITTLE TINY BROWN BUGS February 21, 2010 bugs are found in our laundry room most commonly. found more feeding on the dog treats in the cupboard. they were boring holes in the food. clinging to the towl in the cupboard. most of them are crawling up walls towward the white ceiling and light Pat columbus ohio Hi Pat, Numerous small beetles infest stored food products, and the Kendall Research website pictures many of them.  Your photo is not ideal for conclusive identification, but we believe this is most probably a Drugstore Beetle, Stegobium paniceum.  The West Virginia University extension website has a good pdf document on the Drugstore Beetle, and you may also view BugGuide for more photos and descriptions. Thank you for your help. I think you are correct and as soon as I can further inspect a bug I will know for sure. Thanks again. Pat 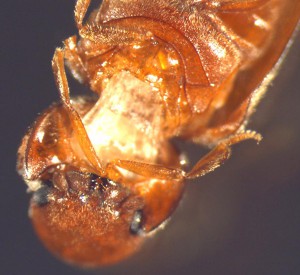 Please Identify December 11, 2009 I have been finding this insect near my kitchen and eating area over the past couple of months. The insect is less than 0.5cm and the pictures are taken with an optical microscope to provide as much detail as possible. Please help in ID this insect. AD Jacksonville, Florida Dear AD, While the detail of your photos is excellent, sadly, the best identifying features like antennae are not well depicted.  We believe these are Drugstore Beetles, Stegobium paniceum, we are not certain.  Bugguide has some excellent images of Drugstore Beetles, and the description:  “Adult: body cylindrical, uniformly brown to reddish-brown; each elytron with several longitudinal striations bearing short fine hairs; antennae with 3-segmented club (terminal 3 segments elongate and smooth, like “linked sausages”); pronotum widens posteriorly.”  Drugstore Beetles will infest stored foods. Eric Eaton makes a correction Daniel: You are correct about the images not showing the anatomical features needed to be conclusive, and the specimen looks like it has been partially squashed such that it looks flatter than it should and the elytra (wing covers) deformed a bit.  All that said, I would say these are “cigarette beetles,” Lasioderma serricorne.  They are nearly identical to drugstore beetles in their habits, infesting all kinds of dried organic matter. Eric