Most people think of spiders as predators of small insects, but in nature’s food chain, not all of them come out on top. Some spiders have to struggle for food or to avoid becoming prey.

In this article, we will talk about these ant-like jumping spiders and figure out whether they bite or not. 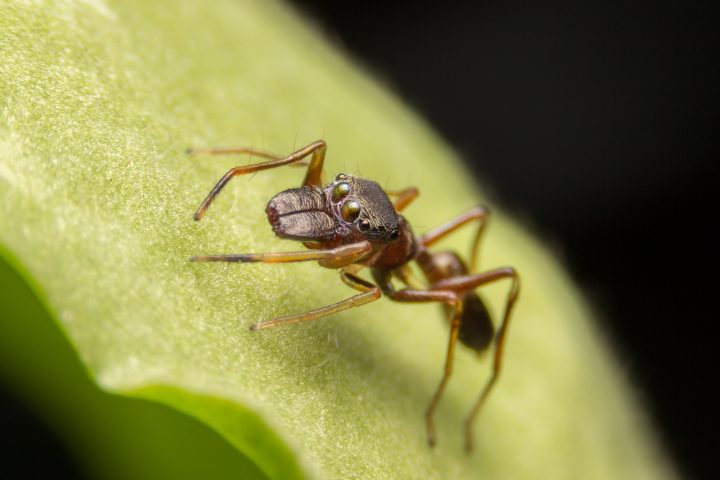 What Are Ant Mimic Spiders?

Ant mimic spiders copy the behavioral and morphological features of ants. In all, three hundred species of spiders mimic ants.

The genus Myrmarachne can even mimic how ants move! This phenomenon of copying ants is so widespread in the insect kingdom that there is a term for it: myrmecomorphy.

However, there are many other reasons for such mimicry, which we will talk about later.

These spiders closely resemble ants and even have similar colors on their bodies. They can come in a wide variety of sizes, ranging from ⅛th to ⅜th of an inch.

Unlike normal ants, they even have a teeny tiny but elongated “ant waist,” which makes them look ant-like (normal spiders have a small waist). They even move like ants!

These spiders are usually reddish-brown, but you might come across black, brown, or orange ones with spots or bands.

Their bodies have reflective hair and a pear-like shape, which makes their two-part bodies look like the three-part bodies of ants.

Their eyes have patches of color, which helps them mimic the appearance of ant eyes. They also have a couple of white markings on their abdomens. 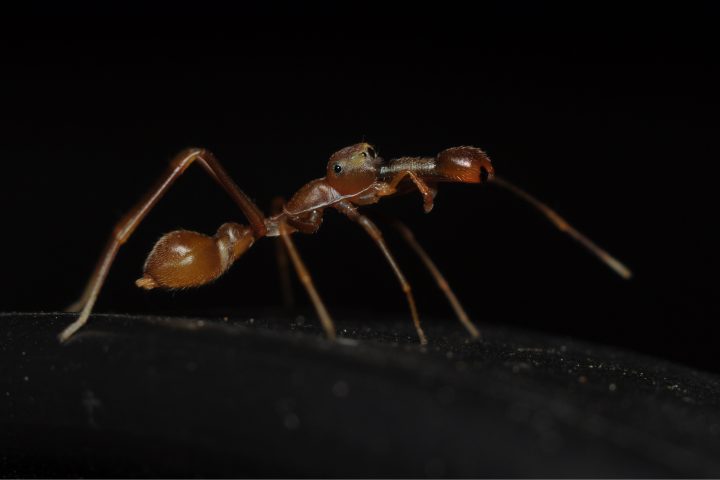 Do they bite to kill their prey?

Some species of ant mimic spiders bite their prey. They behave like lurker predators, waiting around for the opportune time and then pouncing on the prey quickly.

Then, they bite into the prey, inject their venom, and hold the organism, preventing it from escaping. Surprisingly, some of the ant mimic spiders prey on ants as well!

Mimetic spiders are smart enough to avoid preying on worker ants. These ants hunt in large groups and can launch an attack very quickly.

If they do want to hunt an ant, they will attack from the front and bite the head, then carry off the ant to a safe place.

The salticidae family of spiders has a variety of hunting methods. Some are constantly on the move and keep a lookout for prey. If they find one, they will stalk and capture it.

However, the genus Phaeacius does not stalk its prey. It sits on tree branches and waits for prey to pass by, drops onto it, and bites to kill.

Does their bite affect humans?

The bite of an ant mimic spider is not painful for humans. When salticid spiders bite, you may feel a welt like a mosquito bite or else a stinging sensation like being bitten by a bee.

The bite is not dangerous to humans either, unless you may be allergic to spider venom. In case of severe allergies, you may feel nauseous, have trouble breathing, and experience other symptoms. You may also get a rash or blister. It is best to consult a doctor if this happens.

Why Do These Spiders Mimic Ants?

Firstly, let’s understand the difference between superficial resemblance and mimicry.

For example, the wolf spider resembles a tarantula but does not mimic its other properties.

On the other hand, these spiders mimic all morphological and social-behavioral properties of ants.

Jumping spiders mimic ants for two reasons. The first is that this helps them to prey on other ants, and the other reason is to be safe from predators. Since it is a question of survival, their imitation is impressive.

Research on their ant-like movements shows that they not only mimic locomotion but also use their front two legs to look like they have antennae, just like ants.

Let’s see to what extent this mimicry goes in the sections below.

Copying Ants to Hunt Them!

Spiders prey on other insects, including ants. But ants are not easy prey, and spiders use mimicry to fool them into getting eaten. This form of imitation is known as aggressive mimicry.

They look so alike that ants aren’t able to recognize the spider. The spider lies in wait for a lone ant without arousing suspicion. Then, it drops down to bite the poor ant.

But what happens next? How does it get past the other ants? The ant mimic spider creates a web into which it drags the ant and lets its venom do the job.

Some ants mimic spiders even use the dead ant’s body as a shield while going back! The other ants are fooled into thinking that it is simply another ant carrying away a dead mate.

When it comes to hunting, spiders often use chemical mimicry. Bolus spiders prey on male moths using this method.

They copy the sex pheromones of the female moth and lure the male in, making it easy for them to attack.

Many insects adopt Batesian mimicry, not just jumping spiders. In this form of mimicry, the prey insect mimics the actions and look of an insect that is harder to prey on.

Some Salticidae spiders have weak defenses and often become easy prey. They are preyed on by other spiders, at times from the same family, and insects like large ants.

But being Batesian mimics keeps these spiders safe. They mimic the look of ants, which have jaws and can clamp down on attackers. Some ants also have venomous stingers.

Thus, they are not “good” prey because they can fight back. Most predators avoid ant mimic spiders, thinking them to be ants with a host of defense mechanisms.

Some experimental findings show that ant-mimic spiders show both Batesian and aggressive mimicry. They use both forms of mimicry to hunt and stay safe in the wild.

Building Their Nest Near Ants to Protect Against Other Spiders

Mimicry is a strong defense strategy for many Salticidae spiders. One of the unique ways in which it keeps them safe is by allowing them to nest near certain ants.

A type of neotropical aphantochilid spider, the Aphantochilus rogersi, uses this strategy very effectively. It lays eggs near the nests of Zacryptocerus pusillus, their model ants, while also preying on Cephalothin ants.

By building nests near ants, they protect themselves against other predaceous spiders. Jumping spiders are often preyed on by spitting spiders that deliberately build webs above their nests.

Since they mimic ants, these jumping spiders are able to build nests near weaver ant colonies. When the predatory spitting spider notices the nearby weaver ant colony, it decides to stay away.

How are ants and spiders similar?

There are some similarities between ants and various spider species. For example, both feed on other insects and have a hard exoskeleton.

Ants and ant mimic spiders are very similar. The similarities include the appearance of antennae and how the spiders’ eyes appear compound instead of simple lens eyes.

Are ants related to spiders?

Ants are not directly related to spiders as they have evolved from the vespoid wasp. However, over centuries, some associations have formed between ants and spiders.

These associations are what have led to the ant-mimicking spiders of the Salticidae family. 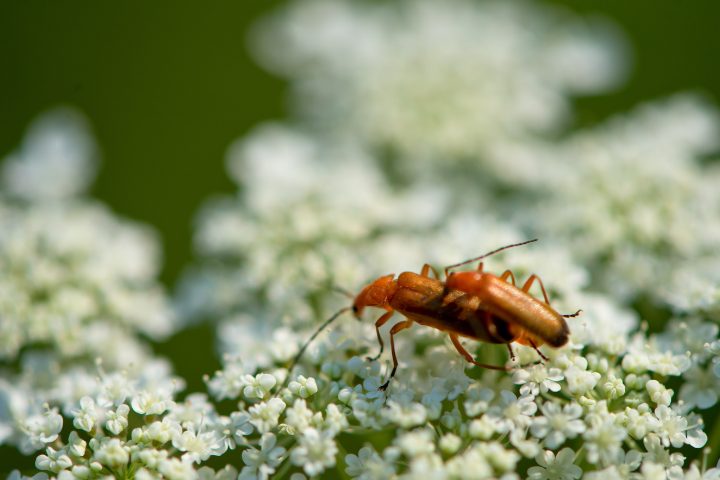 What do ant-mimicking jumping spiders eat?

Ant-mimicking jumping spiders feed on small insects and arthropods. They are also known to eat ants and, sometimes, other spiders and their eggs.

Larger ant mimic spiders can eat other spiders, whereas smaller jumping spiders are often prey for larger ones.

What insect mimics to avoid attacks?

As you now know, jumping spiders mimic ants to avoid attacks. But some other organisms and insects exhibit such defense strategies too.

These include mantises, true bugs, beetles, flies, thrips, and stick insects. They are usually Batesian mimics, and their mimicry helps them to stay safe from predators.

Ant mimic species of spiders are truly unique and interesting. It may take you a while to recognize them, and their mimicry is really very good.

These spiders have evolved mimicry as a means to ward off predators and fool their prey. They even use their copying skills to hunt other ants, all the while fooling fellow ants into thinking they are one of them.

Thank you for reading, and we hope you enjoyed reading about the exploits of ant mimic spiders!

Ant mimic spiders are a very unique and interesting species, and our readers have asked us many questions about them over the years – what do they eat, where do they live, and so on. Read on to find out more.