The Cottonwood stage beetle is quite common in Arizona, but they are not as dangerous as they are perceived to be. Learn more in the article below.

Stag beetles are the often highly misunderstood members of the Lucanidae family. There are between 800 to 1,250 species in this family

These beetles are often considered extremely dangerous due to their appearance, simply because they have huge protruding mandibles.

The fact is, most of them don’t have strong enough mandibles to bite. The cottonwood stag beetle is one such insect found in Arizona, US.

In this article, we will determine if the cottonwood stag beetles are as dangerous as they look.

As the name suggests, these beetles live in Riparian areas with an abundance of old cottonwood trees.

These insects have glossy back-colored bodies and can show an average growth of 1.02-1.14 inches in length.

Like other stag beetle species, they also have strong and long mandibles. They use these primarily to eat tree sap. They also have a hard outer shell and a pair of wings.

As larvae, cottonwood stag beetles consume a lot of dead and rotten wood. They use their jaws to tunnel through rotten wood to find white rot to consume.

They like to infest deadwood of willow, oak, lime, and ash trees. Since they only consume rotten wood, small plants and shrubs are usually safe from these creatures.

The adult beetles usually don’t eat. They rely on the fat reserves that they gain during the larval stage.

Where Are They Found?

In the US, you can find these insects in parts of Arizona. Also, you can spot them in some parts of Southern Asia and Australia.

These beetles also consume woodchips in playgrounds, so there is a high possibility of spotting them near such spots.

As mentioned above, stag beetles have large mandibles that look similar to the antlers of a stag. The males usually have larger mandibles than the female beetles.

But the reality is that these insects are not aggressive, and they rarely ever attack humans. But that does not mean that you should throw caution to the wind when around them.

Both male and female cottonwood stag beetles can deliver intensely painful bites, which can cause redness, swelling, pain, and rashes.

While the pain usually subsides within an hour or so, it is best not to mishandle them.

The cottonwood stag beetle is not poisonous at all. They may look scary, but they do not usually attack humans.

But still, they pose a threat of delivering painful bites; therefore, you must not be reckless around them.

It can be beneficial to have these insects around your garden, especially during the mating season. Their larvae actively consume dead and decaying wood and vegetation.

Thus, they can be an excellent way to clean your garden of wood carcasses. Adding to that, they do not cause any harm to your decorative small plants and shrubs.

What do Cottonwood stag beetles eat?

Cottonwood stag beetle larvae usually consume the dead and rotten wood of cottonwood trees. They like to infest decaying ash, oak, willow, and chestnut trees.
The adults, on the other hand, do not consume anything; they rely on the fat reserves that they gain during the larval stage to stay alive.

Is a stag beetle harmful?

Stag beetles may look tough and dangerous, but they are non-aggressive insects. They rarely attack humans.
However, you should never be reckless around them as they have strong mandibles and deliver painful bites.
They have strong chewing muscles that can help them break past the human skin.

What happens if you get bit by a stag beetle?

If a stag beetle bites you, there is a high chance of experiencing intense pain.
Since they have mandibles that are strong enough to break past the skin, you might notice bleeding and redness in the area.
However, thankfully, these bites are poisonous. They won’t cause any fatal injuries or illness.

What should I do if I find a stag beetle?

If you find a stag beetle, do not approach or touch it recklessly.
Since they have solid mandibles and strong chewing muscles, they can deliver intense painful bites.
If you want to touch them, it is better to use gloves to stay safe.

Cottonwood stag beetles and other giant stag beetles can look intimidating but these creatures are mostly harmless.

But since they have large jaws, they can deliver painful bites. You must be careful around these beetles.

At the same time, you should know that they are not poisonous. Thank you for reading the article.

Cottonwood beetles are quite common in Arizona, and we have received many emails over the years from that region asking us to identify the particular species.

Here are some of the pictures and emails from our readers. 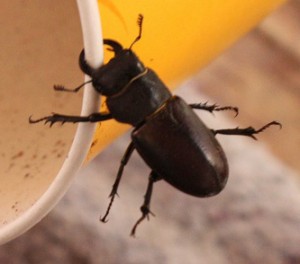 what is the name of this beetle Location: Orem, Ut July 1, 2011 10:02 pm We found the following beetle on July 1st, in Orem UT, at a public park among the wood chips. It was 7 p.m. at night and there were several of these beetles walking around the wood chips. Signature: Dante Hi Dante, This is a male Stag Beetle in the genus Lucanus, but your location in Utah is a bit far west for the species we usually receive.  We did some research on BugGuide, and we believe this is a Cottonwood Stag Beetle, Lucanus mazama, and if we are correct, this represents a new species for our website. Daniel, Wow thanks for getting back so soon.My five year old son is an avid bug lover and he thought it was great that he found these beetles. What’s funny is he insisted that they were a type of stag beetle, but we couldn’t find them on the web. It’s interesting you say they’re a bit far west because we saw between 20-30 in the playground. He’d like to know what they eat. Thank you for your info it’s been helpful. Dante Hi again Dante, We should probably clarify what we meant by our “west” comment.  Most of the North American Stag Beetle submissions we receive are from two species, the Reddish Brown Stag Beetle, Lucanus capreolus, and the Giant Stag Beetle, Lucanus elephus.  The furthest west we know of for those two species is Texas.  Your beetle is a different species, the Cottonwood Stag Beetle, Lucanus mazama, and BugGuide has only received submissions from Arizona and we have never received a submission of that species prior to your letter.  You can try feeding your Stag Beetles overly ripe bananas or other very ripe fruit.  Stag Beetles are believed to feed on tree sap, but there is not much available information that we are aware of regarding the feeding habits of Stag Beetles in the wild. We are fascinated by the wood chip connection.  We just located these reports from Europe (they have their own species there), that Stag Beetles are being found in places landscaped with wood chips.  This is the best article we have read online in a very long time. 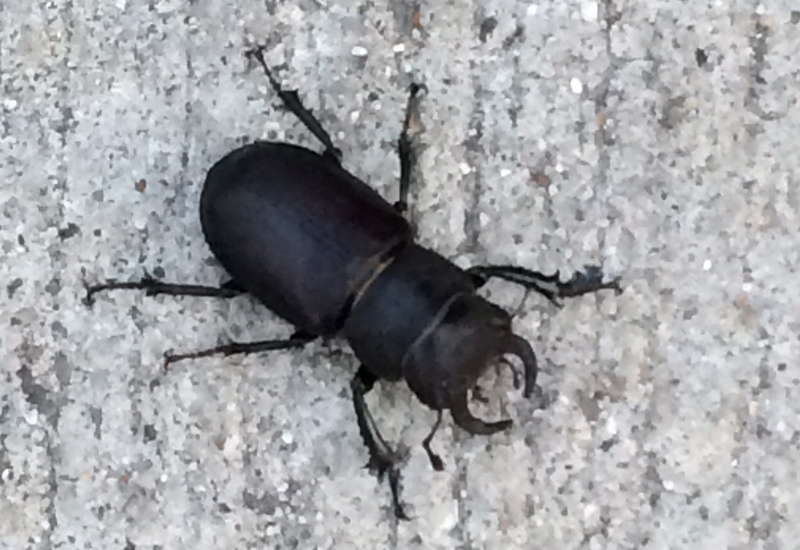 Subject: Cottonwood Stag Beetles Location: Lehi, Utah June 29, 2015 12:36 pm Hello! I came across your site while trying to identify (what I now know is) a Cottonwood Stag Beetle in Utah. I added my own comment to the topic on your site and saw you mention you’d be happy to receive photos by submitting them through this link, so here I am! I don’t know what you’d do with them, but I’m happy to share… Signature: Jenny Jones Dear Jenny, We are a bit behind in posting identification requests, but we are thrilled to post your image of a Cottonwood Stag Beetle as we have received several recent comments, but no new images. 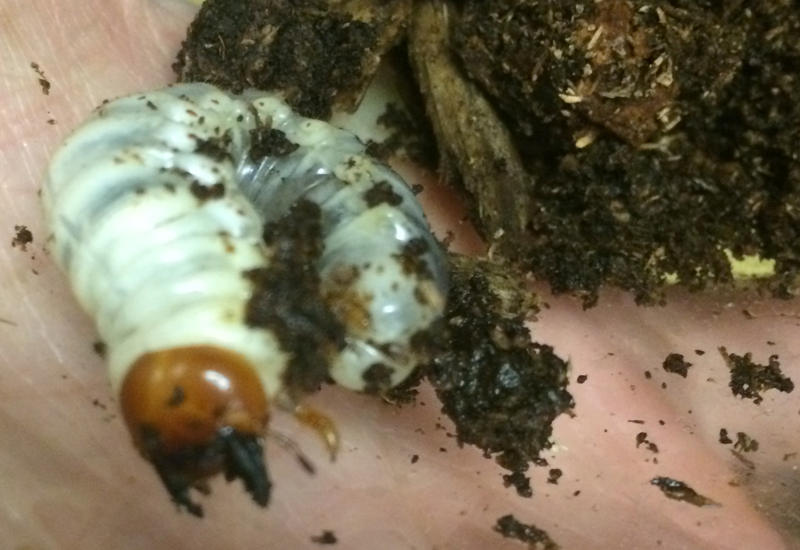 Subject: Cottonwood stag beetle Location: Orem ut January 1, 2017 5:37 pm We have what we believe is a cottonwood stag beetle larvae. He is over 2 inches long and has large pinchers. We found him buried in the wood chips at the playground where we have seen the really big cottonwood stag beetles and we are assuming for its size and location that is what we have. My kids really want to “raise” it. We have kept it in a jar with wood chips for about 3 months. We occasionally add a little water. I can’t find anything about it’s lifecycle. What else can we do to ensure a successful metamorphosis in the spring/summer. We check every few days for movement through the glass, so far so good. Signature: Jr entomologists Dear Jr entomologists, You are our first posting of the New Year after returning back to the office today.  We agree that this is most likely a Cottonwood Stag Beetle Grub since you have found adults in the vicinity.  Your individual looks like the Stag Beetle Grub pictured on BugGuide. 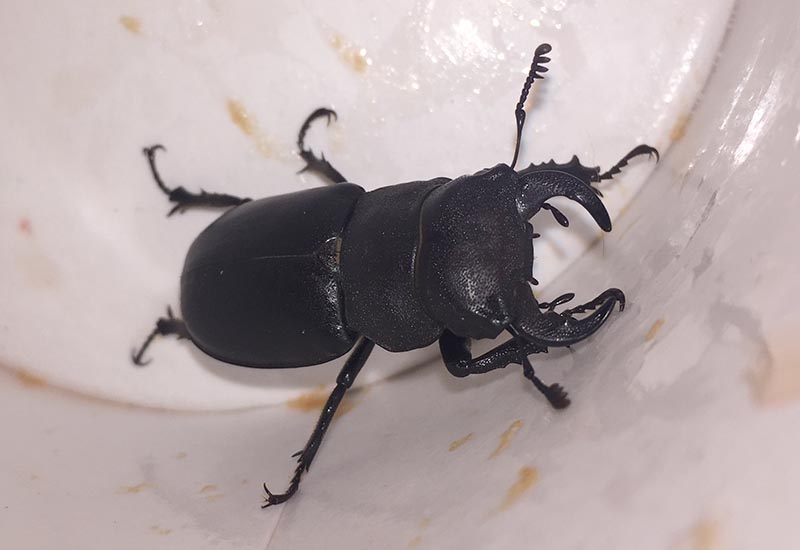 Subject:  Cottonwood Stag Beetle Geographic location of the bug:  New Castle, Colorado Date: 06/26/2018 Time: 12:25 AM EDT Your letter to the bugman:  I was picking up some trash in my yard when i noticed a pretty big black beetle eating what looked like a smaller beetle without its head. I took it inside to show my family and when I went to go let it back outside there was another one right where i found the other one! How you want your letter signed:  KD Dear KD, Thanks so much for sending in your images of male Cottonwood Stag Beetles, Lucanus mazama, though we believe the predatory behavior you believe you witnessed was actually something else.  The Generic Guide to New World Scarab Beetles has a nice comparison to help differentiate the sexes of the Cottonwood Stag Beetle.

Subject:  Cottonwood Stag Beetle Geographic location of the bug:  South-Central Utah Date: 08/04/2018 Time: 01:53 PM EDT Your letter to the bugman:  I noticed in one of your posts you mentioned being surprised that these beetles range as far west as Utah. This one was found (alive) near Capitol Reef National Park. I’ve lived here for nearly 20 years and this is the first one I saw here. Perhaps range is extending due to climate change. Anyway, thought I’d provide another specimen for your guide. How you want your letter signed:  Guy Tal Dear Guy, Thanks so much for providing this awesome image of a Cottonwood Stag Beetle.

34 thoughts on “Cottonwood Stag Beetle: Is It Dangerous?”