In this guide, we look at the mating rituals and life cycle of one of the most common wasps in North America – Cicada Killers.

While there are more than 20,000 solitary wasp species in the world, the cicada killer deserves special mention.

These relatively harmless wasps often appear to be scary simply because of their large size. They get a bad rap because they look similar to other bad apples, such as yellow jackets and Asian Giant Hornets.

However, cicada killers are usually harmless wasps that are beneficial to humans in the garden. We’ll be exploring the life cycle and the mating habits of cicada killers in detail in the blog below.

As mentioned just earlier, Cicada Killers are one of the largest species of wasps in the world, with a length of 1.5 inches to 2 inches.

You can identify them by the bright yellow markings on their black bodies right over the abdomen. This wasp has a rusty thorax and head, while the wings are rust-colored.

The female wasp of this species also has a stinger at the end of its abdomen, while the males just have a sharp spine to defend themselves.

Male cicada killers try to attract the females that enter their territory and mate if the courtship is successful.

Although we don’t know the exact details of their courtship process, each male wasp of this species is capable of fertilizing several females.

The females mostly focus on laying eggs and hunting insects for their larvae, besides building the nest in the first place.

The males have less work to do – they only mate and defend their perching sites from other rival males.

They can be quite aggressive at defending the nest and tend to attack anything that moves nearby.

Thankfully, they don’t have stingers and can only jab with the spine at the tip of their abdomen. The role of a male cicada killer ends after mating, as it then dies.

The total life cycle of cicada killers lasts about a year. Although they take a long time to reach maturity, they live only a few weeks as adults. Let’s look at the long process they take from the egg-laying stage right upto the time they come out as adults.

The adult cicada killers emerge from their nests in summer after overwintering through the cold months. This explains why their activity is at its peak in July and August.

You will find plenty of cicada killers in your garden, as they primarily survive on flower nectar. It’s during this period that they mate and reproduce.

After they have mated, the females start burrowing into the soil to dig out nesting tunnels.

They usually do this in loose soil that’s easy to dig into. Each nest may comprise several tunnels and run up to 24 inches deep.

Once the nest is ready, the females hunt cicadas for their future offspring to feed on. They paralyze the prey, drag them into the nest, and embed an egg in the body of each cicada.

In this regard, you should note that while the females stay alive for long enough to hunt and lay eggs, the males usually die after mating.

The eggs take only two to three days to hatch. The larvae begin feeding on the paralyzed cicada from the inside.

They start out by sucking the blood of the poor creature and then move on to other parts, leaving the nervous system intact so that it remains alive till the end.

They keep feeding for a couple of weeks until only the cicada’s shell remains. They remain in the larval stage until fall.

At the onset of the fall season, the cicada killer larvae spin a silken cocoon around themselves and get ready to overwinter.

In the safety of its cocoon, the wasp larva gradually pupates into an adult cicada killer wasp. Once summer sets in and the temperatures rise, the adults emerge, and the cycle repeats.

How Long Do They Live?

The life cycle of a cicada killer is about 11 to 13 months, from the laying of the egg to the death of the adult wasp.

However, they spend most of their life cycle underground, inside the nest. It takes them about 10 to 12 months to mature and complete pupation.

The adults die after their respective roles of mating, building nests, laying eggs, etc. After maturing, the males live about two weeks.

The females have a comparatively longer lifespan as adults – they live for around four weeks after leaving the nest.

How can you tell if a cicada killer is male or female?

To differentiate between male and female cicada killers, you need to observe them closely. While the females have an ovipositor or stinger, the males don’t have one.
Their behavior is another indicator since the males tend to be aggressive toward anyone coming near the nest. The females are docile and don’t attack unless handled poorly.

Where do cicada killers build their nests?

Cicada killers build their nests underground by digging tunnels. They target areas that receive ample sunlight and have a nearby food source, such as tree roots where they can hunt cicadas.
The burrow entrance usually has some soil piled up around it in a U-shaped pattern, which the wasps dump while digging.

How long does it take for cicada killer eggs to hatch?

It doesn’t take very long for the cicada killer eggs to hatch. The larvae emerge within two to three days of the adult female laying the egg in the body of the cicada. Comparatively, the larval stage is very long and lasts several months.

How many eggs does a cicada killer lay?

Cicada killers usually lay up to 15 eggs per season. They divide their nests into chambers, laying one egg in each of them.
The wasps supply each chamber with one to three cicadas for each offspring to feed on. The mother wasp knows which of her eggs are females, so she provisions more cicadas for them.
Female cicada killers are larger, need to lay eggs, and live longer. Hence, they need extra nourishment.

Cicada killer wasps are common in both North and South America, which means you are quite likely to find them in the summer.

There’s no need to panic when you see one of them, as the females are docile, and the males are incapable of stinging. I hope you enjoyed the read and found your answers in this article.

Go through many pictures and letters from our readers demonstrating the fascinating cicada killer mating process and lifecyle.

CK Bug Love
WTB:
Here’s a compromising shot of two Cicada Killers from July 2005 that you might enjoy for your Bug Love page (which I think is great – I had no idea there were so many bug paparazzi.
Andrew from Mercer County, NJ.

Hi Andrew,
We received another image of mating Cicada Killers today, but that couple was shy, hiding behind

Identify hornet please.
My neighbors say it is a hornet and it looks like a big one but I have no idea what kind. My husband says it is a japanese hornet and can be dangerous around the kids. I plant a lot of plants for bees and wasp and they never bother us but the kids are now afraid to play outside because of these. If it is dangerous do I call an exterminator? I would hate to have to put chemicals in my yard. Thanks,
Heidi from Fort Mill, SC 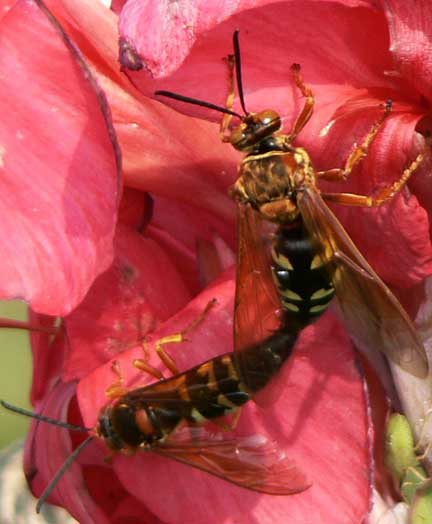 Hi Heidi,
We love your photograph of Mating Cicada Killers, Sphecius speciosus. These large wasps are not aggressive, but they can sting. Tell your children to respect them and they will not be stung. They attack cicadas, not people.

Thank you so much for the information. I enjoyed doing research on my newly identified critter and educating the children on them. I actually take it as a compliment when “porch pets” choose my property so I can add another “porch pet” to my list. It makes sense also since I have been hearing cicada’s around lately. I also found one of these wasps dead across the street and have only seen one flying around since the picture was taken. Thanks again,
Heidi, Ft. Mill, SC 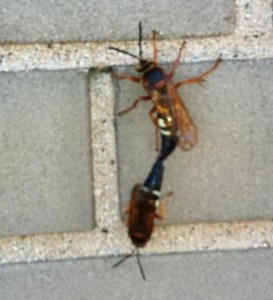 Large Bee?
Location: Lansing, Michigan
July 20, 2011 1:30 pm
Hello,
Over the past month I have noticed several (6-10) very large bees hanging around a lamppost near my work. I am Michigan and first noticed these around the beginning of July. I have been trying to get a photo of one, but they never stay still and they are very quick. If I had to guess the length I would say 1.25 – 2 inches.
Do you know what this is? I have never seen one before.
Signature: B

Dear B,
These are not bees.  They are Sand Wasps, more specifically, mating Cicada Killers.  Because of their large size, many people find them intimidating, but they are not an aggressive species and we have not received any confirmations of individuals who have been stung by Cicada Killers, though we acknowledge that the possibility exists, and should it occur, we would imagine the sting would be painful.