Hornworms are one of the most popular feeder insects for geckos, lizards, and other pets. But how big do hornworms get, and by when should you feed them to your pet? Let’s find out.

Hornworms grow to become one of the largest insects on the planet. There are more than 1400 different hornworm species in the world.

They are larvae of the Sphingidae family of moths and are more common than you think. At their peak, these insects grow to be as big as four inches in length. Let’s find out more about them. 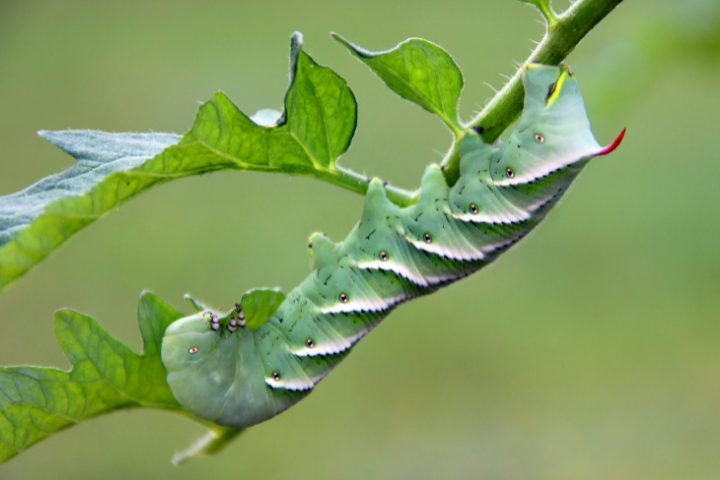 Before we learn about how big these worms grow to be, let’s first understand their lifecycle a little bit.

Adult moths lay eggs on the lower surface of leaves of plants from the solanaceous family. These Hornworm eggs are light-green in color and stay on the leaf till hatching.

When they hatch, these worms grow in up to five larval stages. They feed on the leaves of the plant on which they hatched and, in three to four weeks, grow to be quite large.

Once matured, the larvae drop to the ground and burrow into the soil to enter the pupae stage. They spend the winters in their pupae stage, buried under the soil.

Eventually, the pupae transform into sphinx moths (also popularly known as hawk moths) in the spring months. These moths are quite big themselves.

Once in their adult stages, the female moths continue the life cycle by depositing eggs on the host plants from where they had dropped.

How Big Will they Get?

As larvae, they can grow between three-four inches in length within four weeks of hatching. Once they complete the metamorphosis into moths, their wingspan is two to eight inches.

The large wingspan of the hawk moth lets it flap its wings rapidly and move quickly in the air. In fact, they can grow so large that they are often mistaken for hummingbirds when they are flying. This is why the moths are also known by the name hummingbird moths.

How Long Do They Last?

The lifecycle of a hornworm spans three to four weeks. In the weeks after hatching, the hornworms grow to full size and then drop to the ground as pupae. Some of them die out at this stage.

If you are breeding them at home, make sure to keep them at a temperature between 75-85 F. You also need to provide them with hornworm chow or other sources of food. If you don’t provide for these conditions, hornworms can die within a single day. 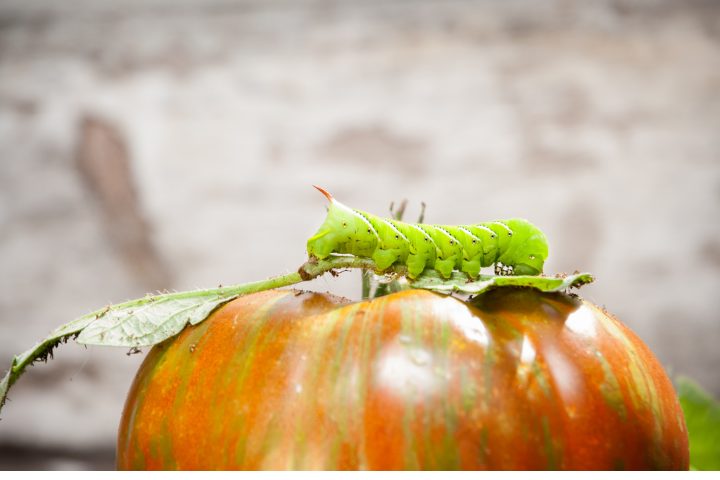 In the wild, hornworms eat leaves from plants in the nightshade family. In fact, they are voracious eaters of tomato plants and other solanaceous plants.

This is why gardeners regard them as pests and the reason why many deploy beneficial insects like parasitic wasps to control their population. Tobacco hornworms are infamous for destroying tobacco plants equally badly.

Here are some more plants they like to feed on:

In captivity, you can feed your hornworms a commercially available product called hornworm chow.

You can also feed them green tomatoes, broccoli, and beans. Do not feed them tomato leaves because it can cause them to retain toxins in their bodies, making them useless as feeders.

Can you keep hornworms as pets?

You can keep them as pets, but hornworms are more popular among pet owners who want to keep them as feeders. They are too short-lived to be good as pets.

How fast does a hornworm grow?

A hornworm has a very rapid life cycle. They hatch and grow into adult worms within three to four weeks. When they grow to their full size, a hornworm will pupate by burrowing in the ground and come out as a hawk moth later.

How long will hornworms live?

Hornworms go through their lifecycle quickly. They will go from the egg stage to a full-grown hornworm in about four weeks. After that, they pupate and burrow in the soil.

When they come out, their lifecycle is just 10-30 days. Both male and female moths live for around 30 days, which is a fairly long lifespan for moths.

What do horn worms turn into?

Hornworms turn into sphinx moths or hawk moths. They are recognizable by their large wingspan (which could be as big as eight inches!).

They are also called hummingbird moths due to their size, wing speed, and long proboscis, which they use to feed on the nectar from flowers, just like hummingbirds. 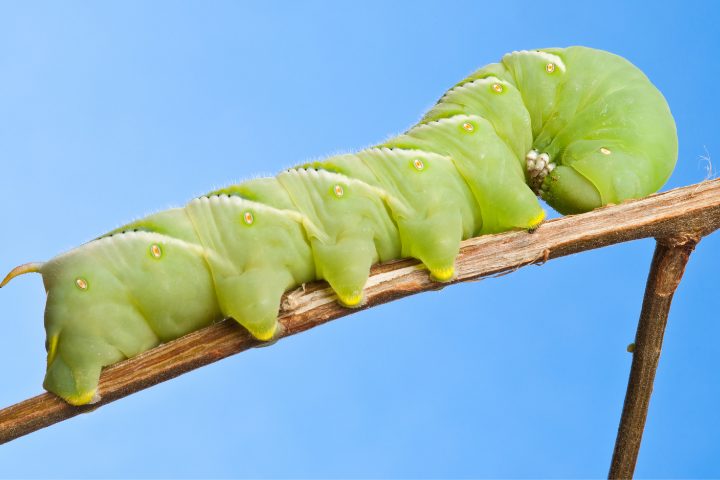 Hornworms are perfect feeder insects because they grow to be so large. They can grow as big as four inches in just three to four weeks! But it’s also important to feed them to your pet quickly because they grow so fast. 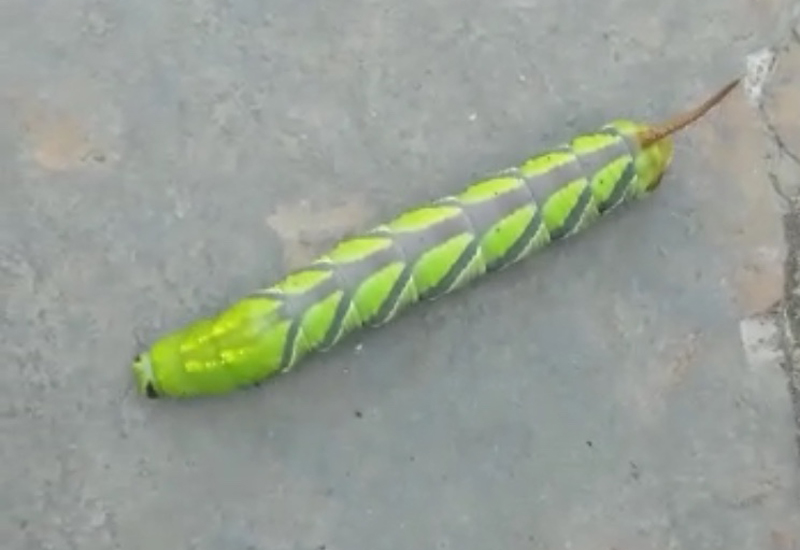 Subject:  What bug is it
Geographic location of the bug:  Durban
Date: 11/20/2017
Time: 02:13 PM EDT
Hi,
This Bug was found in my dads yard. Can you help identify what type of bug this is?
How you want your letter signed:  Suren

Dear Suren,
This is a Hornworm, the caterpillar of a Hawkmoth in the family Sphingidae, but we have not had any luck identifying the species.  We could not find it on iSpot, but we cannot view any observations past page 1, so it might be listed there, but either we are having technical difficulties, or the site is having technical difficulties.  We have numerous images on our site of Death’s Head Hawkmoth Caterpillars, a different species from the same family that looks somewhat similar.  Do you know what plant it was eating?  Knowing the food plant is an excellent clue to discerning the identity of many insects.  Perhaps Bostjan who frequently contributes to our site will write in with a comment and an identification.

Update:  November 22, 2017
Thanks to Bostjan’s comment, we now know that this is Coelonia fulvinotata, and there are images on Zimbabwe Flora and Hiveminer to support that identification.

Letter 2 – Unknown Hornworm from Trinidad appears to be Isognathus species 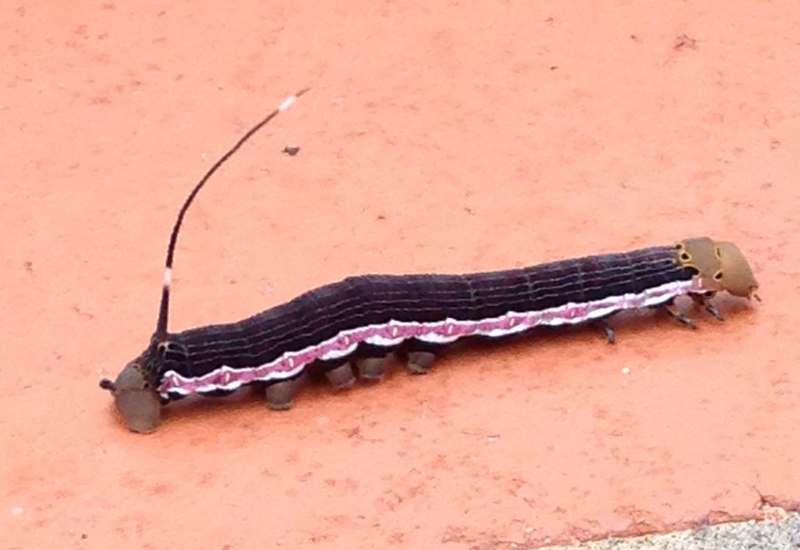 Subject: Purple caterpillar with pink stripe
Location: Caribbean
July 16, 2016 2:44 pm
Hi, my mum recently spotted this purple caterpillar with a pink and white strip along its body. It has a long stinger on its rear end. It looks similar to the frangipani caterpillar that we also have here. We live in Trinidad and Tobago in the Caribbean. Can you help us identify it?
Signature: S.J.

Dear  S.J.,
This is a Hornworm Caterpillar in the family Sphingidae, the family that includes the Frangipani Caterpillar, the larva of the Tetrio Sphinx.  We searched the Sphingidae of Trinidad page to no avail.  The horn reminds us of the caudal horn of early instar caterpillars in the genus Eumorpha, and we also wonder if this might be a strange color variation of the Tetrio Sphinx.  We have contacted Bill Oehlke and we hope to hear back soon.  We hope you will allow Bill to post your image to his very comprehensive site.

Dear Daniel,
Thank you so very much for your help! Sure he can post the image, that’s no problem.
Regards,
S.J.

Bill Oehlke Agrees
Daniel,
Yes, I agree it is one of the Isognathus, and scyron is likely.
Bill 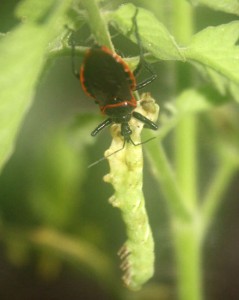 Good bug / Bad bug?
Location: West Tennessee
August 24, 2011 8:16 pm
Wondering what bug this is that is sucking the life out of this tomato horn worm?
Signature: tn_wildflower

Dear tn_wildflower,
It is nice to see that though it is called a Bee Assassin, Apiomerus crassipes, one of the Assassin Bugs, does not subsist solely on bees.  This is a very nice food chain image.  See BugGuide for some comparison photos.

9 thoughts on “How Big Do Hornworms Get? #1 Answer”