Zephyr Eyed Silkmoth pic
August 29, 2009
Thanks for the caterpillar ID! I have a nice pic of a silkmoth in full, angry display. Can you pass it along to BugGuide? He says on the site that he doesn’t have a pic of one displaying.
Mike
Edgewood, New Mexico, 7000′ pinion forest 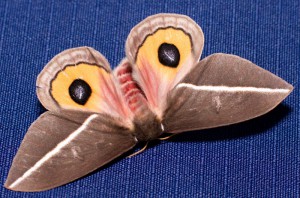 Hi Mike,
Thanks for sending us a photo of the adult Zephyr Eyed Silkmoth, Automeris zephyria, to accompany the caterpillar images your sent us the other day.  Here at What’s That Bug? our editorial staff posts all of the letters and images to our site individually, while BugGuide has postings initiated by the readership.  Right now, the time it would take us to submit a posting to BugGuide on your behalf would prevent us from posting letters to our own site, depriving our readership of several new letters and depriving our own querants from seeing their letters online.  If time permits in the future, we will try to post your letter to BugGuide, but for now, it will be on the internet at our own site.

Polyphemus Moths attracted to one another!!!