Subject: Unknoown Bugs
Location: Charlotte area (Ft. Mill, SC)
August 15, 2014 11:19 am
Hi. I know your busy, but I have two bugs I just can identify.
Image #1 is a brown turtle-shaped bug. Found at the edge of a pond. It is about nickel size.
Image #2 is a bug that was attracted to a naight light.
Both were photographed in the Jul-Aug period this year in the Charlotte (NC) area.
Thanks. No rush in geting an answer.
Signature: Dr. Danny O. Crew 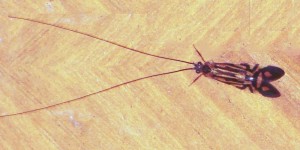 Dear Dr. Crew,
Your first bug is some species of Stink Bug, and we will attempt to be more specific in the future, but your second image has us very excited.  We did not know how to begin to classify this winged insect with such extremely long antennae, but diligent searching eventually led us to the Zebra Caddisfly, Macrostemum zebratum, on BugGuide.  Caddisfly larvae are aquatic, and the adults are not strong fliers, so they are generally found near water.  As you indicated, adult Zebra Caddisflies are attracted to light.  This is a new species for our site.

Thanks. I do live on a large pond.  As for the stink bug?, that was my first thought; however, it looked more like a beetle/turtle and was thick with a very round shell. I’ve never seen a stink bug like that. Also it was larger than most I’ve seen. I’ll await your research.