Ctenucha cressonana found in Western Illinois (Quad Cities)? Hi!
My son spotted a beautiful moth on our windowpane, so we too a photo of it (attached) and tried to find out what kind of moth it is. When I looked on the Internet the closest moth would be in the Ctenucha family – Orange head, Blue iridescent body, brownish wings. It doesn’t appear that this moth has been recorded in this area (if indeed I was able to identify it correctly) so I am contacting you in efforts to : a.) identify the moth and b) record the siting if this is a ‘first time’ observance. Whatever the outcome, I’d appreciate any feedback so I can work with my son Ivan re: his potential ‘new discovery’. Thanks –
Mary Stayner
Moline , IL 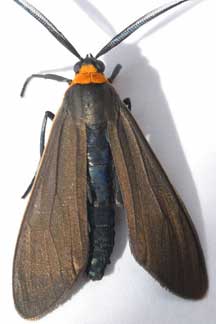 Hi Mary,
You did a very good job of researching your discovery, taking the identification to the genus level. Ctenucha cressonana is a western species. Your moth looks to us like the Virginia Ctenucha, Ctenucha virginica. BugGuide does not list any submissions from Illinois. Ironically, BugGuide does not list submissions from Virginia either. Illinois would be within the range of the Virginia Ctenucha, but as to whether there have been reports from your county, you will need to check with state officials.

Correction: We goofed
Hi again!
I looked a little closer – I think it’s actually a Cisseps fulvicollis. Thanks for your earlier quick response!
Mary Stayner

Hi again Mary,
You caught us in a mistake. BugGuide notes that: “This species and the Virginia Ctenucha are probably Batesian mimics of wasps or perhaps distasteful beetles. Many of these moths were shot feeding on Eupatorium spp., a genus rich in pyrrolizidine alkaloids (PAs) which are toxic to most predators. “