On December 30, 2013 · Category: Aphids, Scale Insects, Leafhoppers, and Tree Hoppers Tagged With: WTB? Down Under · 1 Comment

Subject: Pyramid Head
Location: Central Coast, Australia
December 30, 2013 5:25 am
Hey, I found this bug on the side of my house and (obviously) have no idea what its is
I dubbed it pyramid head, named after the monster from silent hill.
thank you in advance.
Signature: Amber 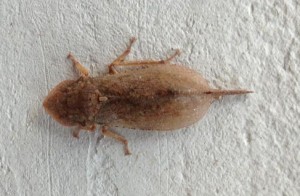 Dear Amber,
While we have not been able to quickly find a conclusive species match for your Free Living Hemipteran, we are relatively confident that it is a Leafhopper in the family Cicadellidae, and probably a Flatheaded Leafhopper in the subfamily Ledrinae.  The Brisbane Insect website has a few photos of immature specimens that bear a resemblance to your insect.  PaDIL, the Pests and Diseases Image Library has a page on the Glassy Winged Sharpshooter and other native insects is can be confused with, and though many of those look similar, none seems to be an exact match either.  We continued to search and then we discovered the World’s Largest Leafhopper, Ledromorpha planirostris, back on the Brisbane Insect website, and we are relatively confident that is your species.  We don’t understand how we missed it the first pass we made on the Brisbane Insect website.

One Response to World’s Largest Leafhopper from Australia: Ledromorpha planirostris