White Stink Bug?
Location: Lebanon County, PA
August 4, 2011 2:32 pm
Alright so I know there are many different species of insects but a White Stink Bug with Red markings… While I was frolicking through the forest in Central, PA I found this awesome insect. I’ve done some research but have not found a name or answer to what this bug is. It is exactly the size of a stink bug but its white, with red markings. Maybe an Albino? I don’t know, so I’ll leave it up to you.
Signature: Jeremy 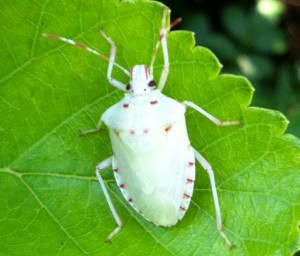 Hi Jeremy,
Based on the striped antennae, our gut instinct is that this is a light Brown Marmorated Stink Bug, an invasive species that has gotten a foothold in Maryland and Pennsylvania.  Perhaps it is a light individual, or perhaps it is freshly metamorphosed and it has not darkened yet.  Sure enough, we found a visual match on BugGuide.