White-Spotted Pine Sawyer
Location: Hornepayne, Ontario, Canada
June 25, 2011 2:58 pm
Where I live we just call these beetles pine beetles or pine bugs. They are very common because we basically live in the middle of the boreal forest, which is predominantly coniferous. I was trying to find out what they are actually called on your website. I kept coming across the white-spotted pine sawyer, and I thought it looked exactly like the ones here except for the white spot; I thought ours were completely black. I saw one on my house today and I caught it so I could take pictures, and lo and behold, it DOES have a white spot. So I thought that was pretty neat.
Signature: HQ

Dear HQ,
The White Spotted Pine Sawyer, Monochamus scutellatus, is so named because of the white scutellum which is the triangle at the junction of the wing covers or elytra.  The markings are variable, though the white scutellum is a distinguishing feature.  Other members of the genus Monochamus look quite similar and it is possible that you may have other species in your area as well.  This magnificent individual is a male.  Males have longer antennae. 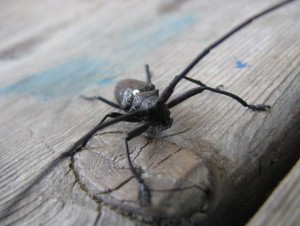