huge caterpillar!!!
Wed, May 27, 2009 at 6:08 PM
today (may 27th) while trimming tall grass and brush for my neighbor, i came across the largest caterpillar i have ever seen in california! it seemed very out of place, on a dry sun baked hill with all the grass mostly brown and dead for the summer. i picked it up and moved it to the shade under an oak. it was very lucky i noticed the little guy before my trimmer got the best of it. it was bright green with two black stripes running the length of it, with black and light yellow spots running down the side. it had a large yellow spike connected to its backside. it was 3 to 4 inches long.
Brennan
Northern California 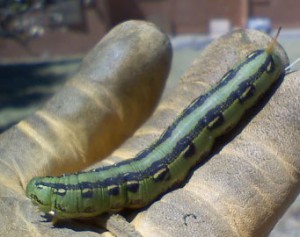 Hi Brennan,
This is a White Lined Sphinx Caterpillar, Hyles lineata. a moth that ranges over most of North America but is most often associated with desert areas of the Southwest.  This species has periodic population explosions in the desert during lush years and the caterpillar can be found in great numbers.  Native Americans feasted on the caterpillars.  The Caterpillars pupate underground, and your specimen was probably searching for some soft dirt in which to burrow.  The adult moths are often attracted to lights.