Crazy bug with crazy tail
Hi,
I was camping in southern New Mexico a few days ago and this insect came into the bathroom. I’ve never seen anything like it! Its body was about 3 inches long, and the tail (is that a tail?) was probably an inch and a half on top of that. It was moving slowly, made a loop around the bathroom, and left. From some of your other posts, I think this might be a solpugid, but i’ve never heard of or seen these guys before so any info you have would be really cool. thanks!
nick
outside Carlsbad, NM 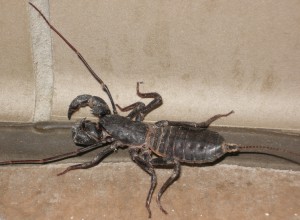 Hi Nick,
This is a Whipscorpion, and it is an Arachnid, not an insect.  Arachnids like Insects are a class of Arthropods.  The Whipscorpion and Solpugid are both Arachnids, but in different Orders.  Whipscorpions do not have venom and are perfectly harmless to humans.  The same cannot be said for tiny creatures.  Whipscorpions are nocturnal predators that feed on insects, other arachnids and even small lizards.  We believe your specimen is Mastigoproctus giganteus, sometimes called a Giant Vinegaroon or Grampus. Your photo is quite detailed and beautiful. Here is what BugGuide has to say about the Giant Vinegaroon: “The vinegaroon is nocturnal and has poor vision. The whiplike tail is used as a sensory organ, as is the first pair of legs, which is not used for walking. Although its tail in unable to sting, this creature can spray an acidic mist from a scent gland at the base of the tail when disturbed. The spray is 85% concentrated acetic acid/vinegar, hence the common name ‘Vinegaroon.’ The heavy pinching mouthparts (modified pedipalps) can also inflict a painful bite. Although very unlikely to attack humans, it can certainly defend itself if provoked.”

Hi Daniel,
Thanks for the quick reply and very detailed information! I was curious about whether it was an arachnid or insect, because the first pair of appendages looked anatomically just like the legs, but were so much longer and, as you said, were being used as feelers and not for locomotion. i had no idea that there were arachnids that only walked on six legs! very cool.
best,
nick