Obvious question
What’s that bug? I can’t find it in any of my field guides. It has a snout that folds back down under it’s head and neck. It’s very clear in the picture but it might be confused as a leg if you don’t know what it is. We call them Dinosaur Stink Bugs, because they’re not quite the same shape as “regular” stink bugs. (Stinkius Maximus) These insects appear in the late summer/fall at my home in Damascus, MD, just north of Washington, DC Thanks
Alan McIlvried 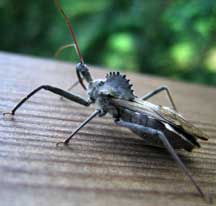 Hi Alan,
Your bug is an Assassin Bug, not a Stink Bug. It is a Wheel Bug, Arilus cristatus. We will be posting your letter even though the Wheel Bug adults aren’t normally seen in the spring because it will eventually go to our archives, and you have words in your letter that might help others identify their Wheel Bug in a search engine. Dinosaur Stink Bug is a pretty awesome description.

Thanks! My kids will be disappointed that we can’t call it a dinosaur stink bug, but it we call it an assassin bug, it will be almost as cool. Now that I know what words to search for (wheel and assassin, I found some other pictures on your site. I am forwarding your site to several friends who are elementary school teachers. You could spend a whole week with kids cruising around looking at bugs. Thanks for sharing with the rest of us.