Second Unknown Caterpillar in AZ
Location: Tucson, AZ
April 17, 2011 10:13 pm
Hi there, My daughter found two of what appear to be the same caterpillars as your reader in Gilbert, AZ. We found them on a snapdragon vine in our back yard in Tucson. I have done exhaustive research and have been unable to identify the caterpillar. Just thought you would like another example of the same critter in the same general geographic area.
PS We are keeping them in a quart mason jar with fresh clippings of the plant on which we found them, and hope to observe them through their metamorphosis. Perhaps then we will be able to identify them.
Signature: Alicia & Sadie

Dear Alicia & Sadie,
We looked through so many Caterpillar images on BugGuide when we received that previous letter that we were seeing cross eyed.  We are no closer than our original guess that it might be a member of the genus Cucullia, the Hooded Owlet Moths, though we couldn’t find any examples on BugGuide that had those markings.  Also the heads on the Hooded Owlet Moth Caterpillars were not pink like the head on the Gilbert, Arizona Caterpillar.  Your caterpillar, on the other hand, looks very much like this Hooded Owlet Moth Caterpillar in the genus Cucullia that is posted to BugGuide.  Though we may be wrong, we believe we may have your identification correct. 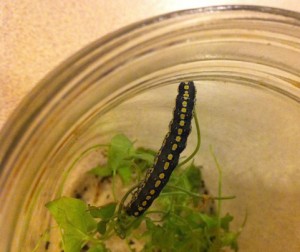 Excellent! I too am seeing cross-eyed after searching in every Arizona caterpillar database I could find online, as well as several for northern Mexico. Thanks so much for being such an awesome resource.
All the best,
Alicia in Tucson

Correction:  December 5, 2016
WE received a comment indicating this might be in the genus Sympistis, and it sure does look like the Scribbled Sallow Caterpillar posted to BugGuide.