Wasp type creature in back yard
Location: Jackson, MS
August 20, 2011 11:59 am
I found two of these dead in our back patio. I have no idea where they are coming form or why they are dead, but I’m glad! If you need another picture, let me know.
Signature: Rebecca 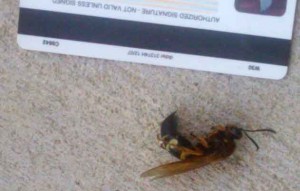 What Killed the Cicada Killer???

Hi Rebecca,
Your wasp is a Cicada Killer, but we are very intrigued as to what might be causing these deaths on your patio.  We have two theories, and we will begin with the more offensive one.  Perhaps they are being poisoned by one of your neighbors.  Cicada Killers are large and scary, though they are not aggressive.  They build underground nests which the female provisions with paralyzed Cicadas to feed her brood.  Many people are frightened by the nesting activity and they try to eliminate the wasps.  We have also received a large number of reports of large Robber Flies this year.  Robber Flies are predators that take prey on the wing.  They have mouthparts adapted to sucking fluids from their prey, so they would not leave bite marks nor would they chew the prey.  Perhaps these Cicada Killers are falling prey to a large Robber Fly.

Mystery from Scotland: Abdomen of a Golden Ringed Dragonfly perhaps