Great black wasps can look very intimidating to humans, but they are not very harmful to us. In this article, we shed light on what great black wasps eat and how it can be beneficial to you.

The Great Black wasp is a digger wasp found across several regions in the United States, Canada, and northern Mexico.

It has a large black body which makes it look very intimidating. However, unlike yellow jacket wasps, these solitary wasps are quite harmless to humans.

What is most interesting about the great black wasp is how they feed their larvae. The larvae are voracious carnivores, unlike the adult black wasp.

They eat live insects that the mother wasp paralyzes and stores in her nest for them. 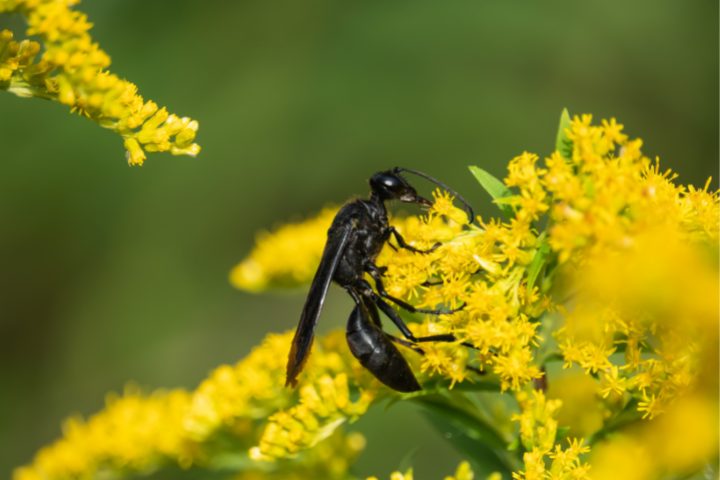 As mentioned earlier, the diet of a great black wasp changes based on which stage of the life cycle they are in. During their larval stage, the wasps are voracious insectivores.

However, at this stage, they are unable to hunt for food themselves. They depend on their mother wasp to feed them.

As larvae, great black wasps feed on grasshoppers, katydids, and crickets that the adult female wasp has paralyzed and placed in her nest for them.

Once they transform into adult wasps, they grow wings. This is when they can leave their burrow out of their underground nest and find food.

The wasps collect pollen and nectar from various flowers, which are common food sources for several types of wasps.

How Do Mother Wasps Hunt?

Most solitary digger wasp species, including the great black wasp, are nectar and pollen eaters. But the female of the species hunts for prey to feed her larvae (not for herself).

The adult female of the species has stingers, unlike the males. She uses them specifically during hunting.

Her favorite victims are katydids, but she might also look for crickets and other smaller insects. When she finds suitable prey, she stings it three times, paralyzing the creature (but not killing it).

The wasp then lays a single egg on the insect (usually under the abdomen) and drags it to her nest. Great black wasps are digger wasps, so their nests are about one foot under the ground.

In their nests, the mother wasps create one main tunnel and several connected tunnels that lead to chambers known as brood cells. Each one is meant for one of her eggs (and, of course, the prey to feed them).

The female wasps often aggregate and build nests close to each other. However, while hunting, they act as solitary wasps, searching and paralyzing the prey completely on their own. 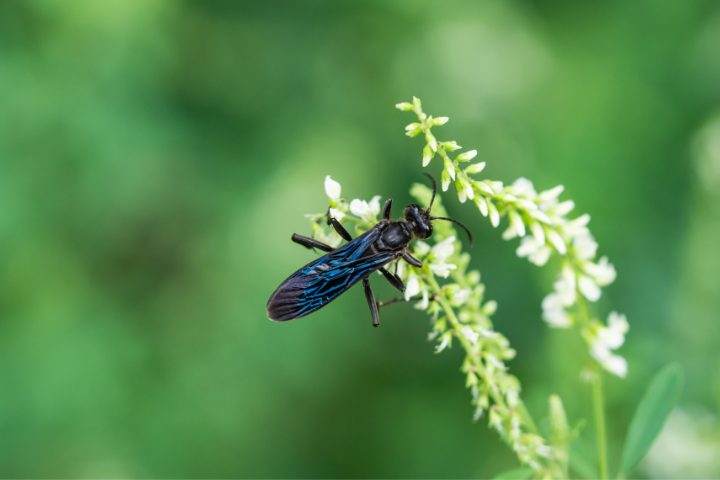 How Do They Feed Their Larva?

Let’s continue our story from the female great black wasp dragging her victims back to her nest.

Now, wasp larvae feed a lot, so the female wasp has to store as many as two to six grasshoppers for each larva. It takes her a while to get all this done.

Once she has provided enough food in each cell, she fills it up with soil and uses a small pebble or leaf to secure the opening.

The eggs hatch in about four days and her larvae start to emerge. They have their food sources all around them, paralyzed by still not dead.

They immediately start feeding, keeping the vital organs for the last so that the insect is alive till the end.

The larvae feed for about ten days and then begin to pupate in the winter months. When they finally emerge, they have to dig their way out of the nest and then fly away as adult wasps.

Why Do They Check Their Nests Each Time Before Entering?

One interesting tidbit about great black wasps is their instinct to check their nests every time before entering.

When the adult female wasp brings her victim, she leaves it outside and checks the nest thoroughly before dragging the prey inside.

If you move the prey even slightly, the wasp will retrieve and then go and check her nest again before coming back for the prey.

This looks like a deliberate activity to ensure everything is just as the way she left it within the nest, but actually, it is just instinct.

Birds use this instinctive nest checking to score a free meal. They often steal the food when the wasp leaves it at the entrance to investigate the nest. This is known as avian kleptoparasitism 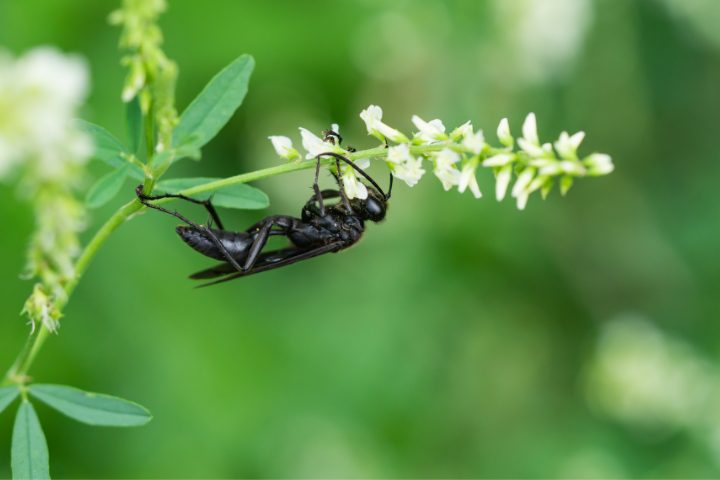 The great black adult wasp is attracted to various plants, including plants like milkweed, sweet clover, thoroughworts, and goldenrod.

These wasps drink nectar as their primary food source, so any flower-bearing plant is attractive to them. Adult wasps are also attracted to the pollen of these plants.

When they lay their eggs, the egg takes about four days to hatch. After that, the larvae eat their pre-prepared meal for 15 days and then weave a cocoon to pupate.

They overwinter and emerge in the summers, burrowing their way out as adult wasps. They mate and then start a new nest to begin laying more eggs. At this stage, the wasp may live for anywhere between 12 to 22 days.

Great black wasps do not like strong scents like those of essential oils. Peppermint oil is one of the best oils to use if you want to repel wasps. Other types of essential oils, including lemon oil, geranium oil, and clove oil are also effective.

While the great black wasp is not aggressive, its sting can be quite painful, so the best thing is just to stay away from them.

Since the great black wasp is not a social wasp, it does not have a colony to defend and, therefore, is very unlikely to attack humans.

However, a female wasp may sting if she feels her nest is threatened. The sting may cause irritation, pain, and in some cases, even an allergic reaction.

How do great black wasps make their nests?

The male great black wasp selects the nesting site as a part of the mating process. But it is the female that spends time digging and constructing tunnels and cells underground for her eggs.

The mother wasp sticks each egg to the underside of a prey insect and places the egg in one chamber of her nest.

Great black wasps are beneficial insects as they are great pollinators and also help to control populations of katydids and grasshoppers.

We hope this article helped you learn about the amazing eating habits of these unique insects. Thank you for reading!

Questions about what these large wasps are quite natural, and that is why many of our readers have asked it to us in the past. Sample some of the emails below. 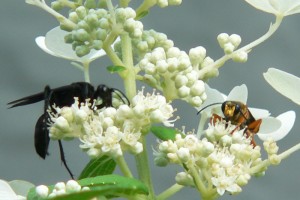 bees/wasps
Location: Kentucky
July 26, 2011 5:37 pm
I have some type of hydrangea that attacks all types of bees/wasps. I would like to know exactly what type of wasps I’m dealing with. I’m attaching three pictures to help you identify both wasps. Can you help? Thanks
Signature: Carla

Hi Carla,
You have two different species of Thread Waisted Wasps in the genus Sphex pollinating your hydrangeas.  The black was is a Great Black Wasp or Katydid Hunter, Sphex pensylvanicus, and the lighter individual is a Great Golden Digger Wasp, Sphex ichneumoneus.  You may read about the Great Black Wasp on BugGuide, and you may also read about the Great Golden Digger Wasp on BugGuide.  The females of both species are solitary wasps that dig a nursery that is provisioned with Katydids to feed the young.  Neither species is considered aggressive. 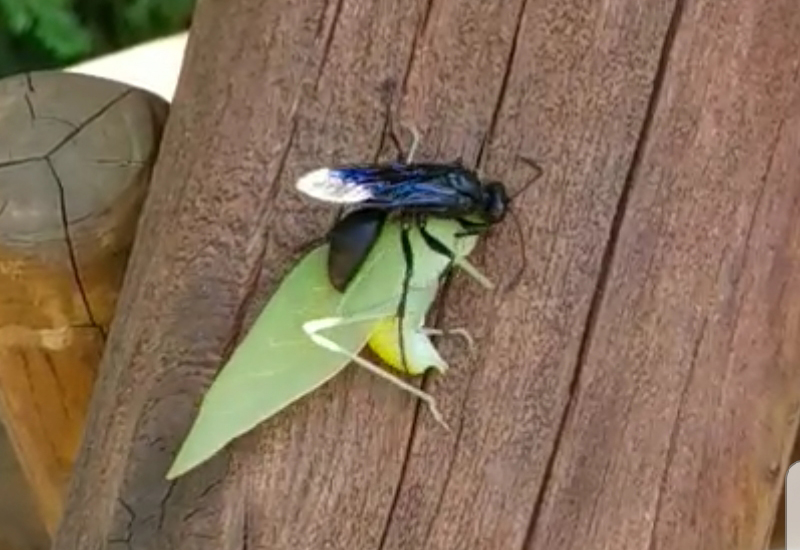 Subject:  Black killer wasp
Geographic location of the bug:  Northern Illinois
Date: 08/16/2018
Time: 04:04 PM EDT
Your letter to the bugman:  These two were battling it out, but the wasp won in the end. I thought it may have been a cicada killer, but this one was all black, maybe a little Blueish.
How you want your letter signed:  Karin

Dear Karin,
We are thrilled to be able to post your wonderful images of a female Great Black Wasp and her Katydid prey.  The wasp has stung and paralyzed the Katydid and she it trying to get it back to her underground burrow.  She is probably climbing the table to give her some height so she can take off and glide toward her nest.  According to BugGuide:  “Provision nests (in burrow in soft earth) with Katydids or grasshoppers. ”  Also commonly called Katydid Hunters, these solitary wasp are not aggressive toward humans.

1 thought on “What Do Great Black Wasp Eat? Parasitic Larvae And Their Doting Mothers”