Subject: Spider Tucson
Location: urban Tucson, AZ
November 11, 2014 2:43 pm
Two pics of a spider found in a co-worker’s house in Tucson AZ in late September 2014. People come to me with their bug questions, but I’m not knowledgable about spiders. If someone can just get it to a rough group of spiders that’d be great. Just curious. Thanks so much.
Signature: Margrit McIntosh 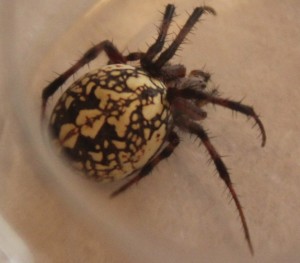 Dear Margrit,
We believe this is a female Western Spotted Orbweaver, Neoscona oaxacensis, a highly variable species.  We matched your image to this image on BugGuide.  Orbweavers are in the family Araneidae, and they are a harmless family of spiders.  Orbweavers build large circular webs, the “classic” spider web.  Most Orbweavers are sexually dimorphic, with the females being much larger than the males.

One Response to Western Spotted Orbweaver