What is this bug???
Location: Seabeck, WA
July 4, 2011 10:18 pm
My sister found this really neat looking bug on one of the outside plants. Looks like it could be some type of beetle. I liked the way it sounded as it flew away.
Signature: Manda G. 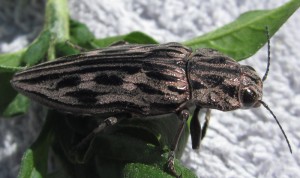 Hi Manda,
This is a Sculptured Pine Borer in the genus Chalcophora, and based on your location, it is the Western Sculptured Pine Borer, Chalcophora angulicollis, the only species that BugGuide has recorded in the Pacific Northwest.  According to BugGuide:  “Eggs are laid on bark of large branches or trunks of conifers, especially fir (Abies), or western yellow pine (Ponderosa Pine, Pinus ponderosa). Larvae hatch and cut through to inner bark, where they form tunnels.”  BugGuide also indicates that they fly noisily when alarmed, much as your letter indicates.  Many members of the family it belongs to Buprestidae, have iridescent or metallic coloration which has led to the common name Jewel Beetles. 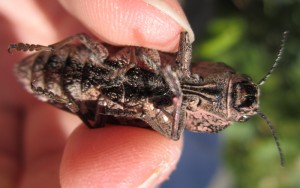