Subject: Is it poisonous?!
Location: Ayr, Ontario (outside Cambridge)
October 20, 2015 7:26 pm
Hi there,
Thank you for existing! I’m terrified of this bug I just found 3 of in my home- when I killed it, a green liquid seeped into the paper towel that smelled like evergreen trees and was so strong. Can you tell me what it is and what I should do about it thank you so much.
Signature: Megan 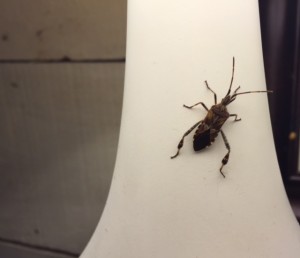 Dear Megan,
The Western Conifer Seed Bug, a species that greatly expanded its range in the 1960s, probably by hitching rides with humans because of its hibernating habits.  Native to the Pacific Northwest, they are now found on the eastern portion of North America as well, and they have been introduced to Northern Europe very recently.  Western Conifer Seed Bugs frequently enter homes during the winter to hibernate.  Because they feed on the sap of pine cones, they retain the smell of the resins when mercilessly squashed.  They are not poisonous.