Subject: green/pink horned caterpillar
Location: Eastern Iowa
September 30, 2014 9:06 am
This guy was found outside in the grass by a chold at the daycare I work at. He is pinkish with a green underbelly and a little horn on his abdomen. He is about two inches long. We were unable to find online what type he is and would like to know to care for him as we’d like to keep him in the classroom. Thanks!
Signature: Celie B 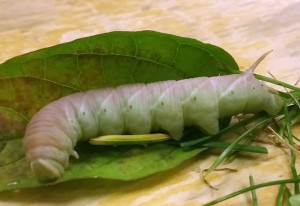 Dear Celie,
This is a Waved Sphinx Caterpillar, Ceratomia undulosa, and according to the Sphingidae of the Americas site:  “Just prior to pupation, larvae frequently take on a rosy hue.”  That means your caterpillar is probably ready to burrow beneath the soil to metamorphose into a pupa.  Provide your caterpillar with a small aquarium with several inches of moist, but not wet, dirt.  Potting soil without additives should work nicely.  Keep the terrarium cool, at approximately the same temperature as the outdoors.  You should expect eclosion, or emergence of the adult in the spring.  Keeping the terrarium at room temperature will most likely result in early eclosion, during the winter, and the individual will not be able to survive outdoors, nor will it find a mate.