Unknown creature who washed ashore…(I don’t think photo went through last time, sorry)
Location: Indiana Dunes National Lakeshore, wet sand at southernmost end of Lake Michigan.
August 9, 2011 7:11 am
We were on the beach in the Indiana Dunes National Lakeshore when I noticed this bug(?) moving in the sand after a wave washed it onto the beach. Even though I’ve taken multiple wildlife courses in the Dunes and could identify every sand cherry and jack pine growing there, I’m at a loss with this little guy.
One thing that doesn’t come across well in the photo is that this creature seemed to have beady little eyestalks that moved independently. For that reason, I thought this was some sort of freshwater crustacean at first glance, but it doesn’t look too much like a shrimp either.
I’d love to learn about this little guy.
Signature: Kitsa 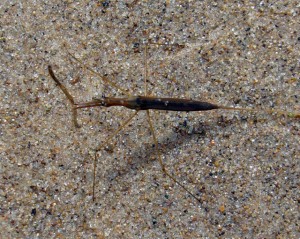 re: beach bug
Location: Indiana Dunes National Lakeshore, wet sand at southernmost end of Lake Michigan.
August 9, 2011 7:22 am
After some more research (just had to get myself pointed in the right direction), I see that it’s a water scorpion. Glad I kept my distance, but what a neat bug 🙂
Signature: Kitsa

Dear Kitsa,
We are happy to see that it took you only 11 minutes to self identify your Water Scorpion and to write back letting us know.  While they are not dangerous, Water Scorpions are reported to have a painful bite.  They are True Bugs that have piercing mouthparts adapted to sucking fluids from their prey, mainly small aquatic creatures including insects, tadpoles and even small fish which they catch with their raptorial front legs while waiting camouflaged among vegetation.