Aquatic creature
Hi Bug People,
Last year about this time, I was trying to figure out what this creature was, but eventually gave up to get the specimen back to water. Well, here are several more… I am about 50 miles north of Sacramento, California. These were found (plentifully enough) in a creek backwater. They have three pairs of forelegs, mostly move in an inverted position (head down) and are extremely active. I’m guessing it’s the naiad of some insect but, beyond that, I’m stuck. Thanks for your knowledge,
Margaret Stelmok 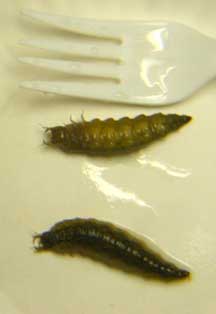 Hi Margaret,
You have sent in photographs of Water Tigers, the predatory larvae of the Predaceous Diving Beetles in the genus Dytiscus. These fierce predators use their jaws to capture prey, often much larger than themselves, including small fish. Eric Eaton added this correction: ” I am fairly certain the OTHER larvae (multiple, in the jar) are larvae of some kind of water scavenger beetle, family Hydrophilidae. Despite the family name, many are just as predatory as water tigers.”