Subject: Can you identify please?
Location: 14°53′54″ N and 15°40′00″ N and longitudes 73°40′33″ E and 74°20′13″ E.
December 13, 2015 9:03 pm
Hi,
I am back once again for a request to identify some lovely bugs. I live in Goa. India. It is a smallest state in India – located on the west coast.
Goa i/ˈɡoʊ.ə/ is a state located in the South western region of India; it is bounded by the state of Maharashtra to the north, and by Karnataka to the east and south, while the Arabian Sea forms its western coast. It is India’s smallest state by area and the fourth smallest by population.
Goa is a former Portuguese province; the Portuguese overseas territory of Portuguese India existed for about 450 years until it was annexed by India in 1961.[4][5]
Goa is visited by large numbers of international and domestic tourists each year for its beaches, places of worship and world heritage architecture. It also has rich flora and fauna, owing to its location on the Western Ghats range, which is classified as a biodiversity hotspot.
Goa encompasses an area of 3,702 km2 (1,429 sq mi). It lies between the latitudes 14°53′54″ N and 15°40′00″ N and longitudes 73°40′33″ E and 74°20′13″ E. Most of Goa is a part of the coastal country known as the Konkan, which is an escarpment rising up to the Western Ghats range of mountains, which separate it from the Deccan Plateau. The highest point is the Sonsogor, with an altitude of 1,167 metres (3,829 ft). Goa has a coastline of 101 km (63 mi).
Signature: Sucheta Potnis 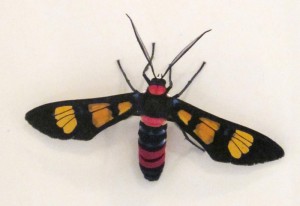 Dear Sucheta,
Because you have multiple species included in your submission, we need to separate them for posting purposes.  Your first attachment, the most colorful of the three moths, is a Wasp Moth in the tribe Euchromiini, and we believe it is Euchromia polymena.  Wasp Moths get their common name as many members of the tribe are excellent mimics of stinging insects, though they are themselves harmless.  They are also diurnal in habit.  This image from TrekNature supports our identification.  We will be postdating your submission to go live during our holiday absence from the office later in the month.

SOUND THE SIREN: Our 15,000th posting is the Police Car Moth