Caribbean cricket nymph?
Location: Carriacou, Grenada, Windward Islands
September 10, 2011 11:20 am
Hi Bugman,
Found these huge insects feeding on foliage in a small coniferous tree. Locals call it a ’God horse’ but this usually refers to a Mantid. This specimen didnt have the telltale triangular head like most Mantids. They are about 200mm in length (head to ovipositor spike) and were very active at night. They had small vestigial wings on their backs which made me think they might be a nymph stage.
Can you help?
Signature: Cheers! Joey Baloney 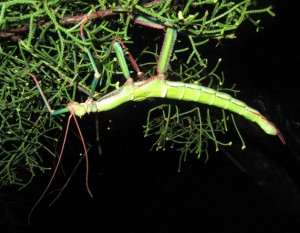 Dear Joey Baloney,
This is a Walkingstick, and it looks very similar to a photo we posted from Puerto Rico several years ago.  That species was identified as Diapherodes acalus and it is commonly called Caballo de San Pedro or St. Peter’s Horse.  We believe that based on the Phasmids in Cyberspace website, that your individual is a female Diapherodes gigantea.  Jonathan’s Jungle Roadshow also has some wonderful photos of this large Walkingstick.

Hi Daniel
Many thanks for your prompt and positive response! I have spent hours on the internet trying to identify it with absolutely no luck whatsoever.
Can I add my sincere appreciation to the work that you guys do?
One last thing – can you shed some light on where this species sits in relation to other related genera?
Thanks again
Joey baloney