Subject: Lime Hawkmoth
Location: Columbus Ohio
July 25, 2012 9:58 pm
I found this moth on the wheel of a school bus where I am working. I thought it was so neat looking that I took several photos. I wanted to save it from being either killed or fumigated in the bus garage. I thought it looked like a camouflage colored glider so I had to look it up online before I posted pictures of it on Facebook.
From what I can see, it sure looks like a Lime Hawk Moth. All of your described colors are there, shades of green, pale pink and light brown.
I am located one mile southwest of Columbus Ohio, in case you were wanting this information.
Attached you’ll find the photos along with them being put ’into’ the body of this email also. Could you possibly let me know if this critter is indeed a Lime Hawk Moth..?
Thank you very much,
Melinda Cochrun
Galloway Ohio 43119
Signature: Melinda Cochrun 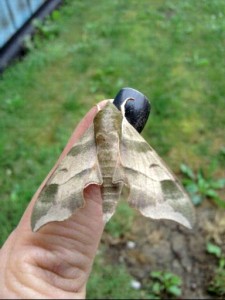 Good Morning Melinda,
That Lime Hawkmoth sighting from Pennsylvania we reported several years ago was a fluke and to the best of our knowledge, the Lime Hawkmoth, which is a European species, has not become established in North America.  This is actually a native Virginia Creeper Sphinx and you are not the first reader to confuse it with the Lime Hawkmoth and since they are in the same family, the confusion is understandable. You can read more about the Virginia Creeper Sphinx on the Sphingidae of the Americas website where it is also referred to as a Hog Sphinx.