Subject: Very Strange Grub
Location: Northern ACT, Australia
December 13, 2016 6:37 pm
I found a very strange grub underneath my sliding door. It is rather small, it is green mostly and has an interesting pattern on its body. It appears to have two fake eyes on the top of its head and has a barb on the rear of the bug. It doesn’t have legs which is why I am calling it a grub. It is not worm like. It is highly active when I touch it with a straw. It doesn’t move without stimulation. It’s probably about the same size of the top half of your thumb and about as wide. The sliding door where it is currently hiding is between the kitchen and the outdoor area which contains gardens and lawn.
Signature: Sincerely, Anonymous 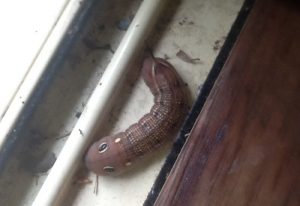 Gardenia Bee Hawkmoth Caterpillar from Australia
Tagged with → WTB? Down Under