Subject: Velvet Ant
Location: Cookeville, TN
September 18, 2012 9:58 am
I was recently camping in Cookeville, TN when this colorful bug came running through our campsite. A couple days later I was able to identify it as a female Red Velvet Ant. I thought you may like to have these photos for your archives.
Sorry they aren’t a little more focused, the pics were taken on my phone and that little bugger is FAST!
I heard rumors that the blue ones lived there too but I wasn’t lucky enough to see one.
Signature: Lex 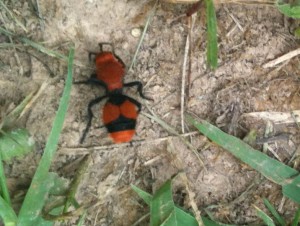 Hi Lex,
Thanks for sending in your photo.  It nicely depicts the coloration and markings of the Velvet Ant commonly called a Cowkiller.