Possible fire ant
Location: Memphis tn
August 15, 2011 11:31 pm
My brother was laying on the floor playing with his Ipod and felt something crawly on him he shifts and next thing he knows lots of pain. I would like yo know what bug this is. I stomped it 6 times and it’s still alive. Under further investigation I saw it had a red 2mm long and .1mm or smaller wide singer (not visible in picture) which was completely retractable into the abdoment.
Signature: Ender670 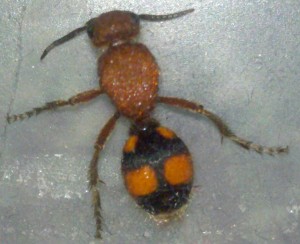 Dear Ender670,
This is not a Fire Ant.  It is a Velvet Ant, but Velvet Ants are not true ants.  They are flightless female wasps, which is why your brother got stung.  The sting is reported to be very painful.  We believe your species is Dasymutilla quadriguttata based on images posted to BugGuide.