Tiny bugs all our fence!
November 13, 2009
We live in Philadelphia and over the past few months part of our back yard fence has been colonized by these small (3mm) insects. There are hundreds of them. The fence runs underneath a weeping willow tree, and they appear to also be on the willow. The bugs move fairly quickly. I’ve tried sweeping/blowing them away, and they return hours later. When you squish them it leaves a purple residue. Our landscaper thinks that based on the speed of the insect, that they’re probably a “beneficial”. Any thoughts?
Sam Blackman
Philadelphia, PA (Northwest corner of the city) 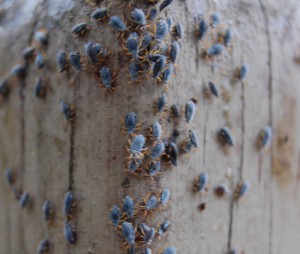 Hi Sam,
WE are not having much luck with a definitive identification.  At first we thought these were immature True Bugs, but we cannot find any images that match.  Then we thought perhaps they might be Aphids, which are in the same insect order as the True Bugs. There is a Giant Willow Aphid, but it doesn’t match your specimens.  We think we need to seek assistance from Eric Eaton and our readership on this identification. 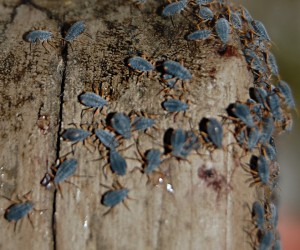 We were not content with giving up, and we located a reference on the UMN Yard and Garden News website for a Black Willow Aphid, with no scientific name.  It is described by Jeffrey Hahn as:  “Black aphids with orangish or brownish legs and cornicles (the tail pipes of an aphid) on willow are black willow aphids. They are large for an aphid, reaching up to 3/16th inch in length. They can be quite abundant in August and September. These aphids are common on willows and may also be found occasionally on poplars and silver maples.
Black willow aphids secrete honeydew, a sticky sugary substance which will coat any object underneath an infestation. Yellowjackets may be attracted to infested trees because of the honeydew. In addition to being a problem in trees, these aphids sometimes have an annoying habit of dropping to the ground and collecting around buildings and nearby objects. If their bodies are crushed, they can stain siding and other objects a blue-purple color.
Despite their abundance, they do little if any lasting harm to established, vigorously growing trees. Their presence is just a nuisance. Tolerate these aphids as much as possible. If you wish to reduce their numbers, try washing them off as many branches as you can reach with a hard spray of water.  … If nothing is done, their numbers will diminish on their own by the end of the month.”  That led to an image on Flickr with the scientific name Pterocomma salicis.  That brought us back to BugGuide.  The images online of the Black Willow Aphid are spotted, but other than that, they resemble your insects.  We still hope to get assistance with this ID. 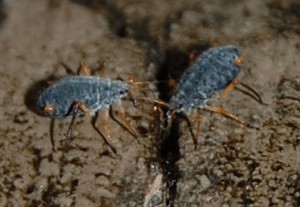 Daniel:
I think it might be a willow aphid of sorts, just not the one you were thinking of.  I think these might be Pterocomma salicis instead, but I am by no means positive.  At this time of year aphids are changing to alternate host plants for the winter, too, so that can really throw things off.  Aphids of the same species can, in at least some cases, look completely different depending on whether they are on the primary host or the alternate host.
Eric

Milkweed Meadow Continued: Which Bumble Bee is it?????