On January 30, 2017 · Category: Stink Bugs and Shield Bugs Tagged With: Unidentified, WTB? Down Under · Add Comment

Subject: Weird Insect
Location: Sydney Australia
January 29, 2017 2:36 am
Just curious about this one. Never seen one like this before.
Signature: Russell 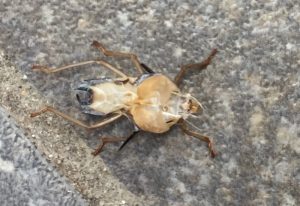 Dear Russell,
This appears to us to be an Exuvia or cast-off exoskeleton that an immature insect leaves behind when it matures and molts.  Our best guess is that it is the member of an order that has incomplete metamorphosis, with immature nymphs resembling adults.  Alas, we do not recognize the order.  We will continue to research this and we hope to get some input from our readership. 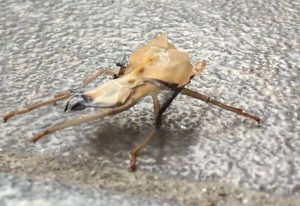 Karl Provides a Suggestion
Hi Daniel and Russel:
My first thought was that this exuviae belonged to a true bug nymph in the family Tessaratomidae. The horn-like caudal projections are a common feature among Tessaratomids, especially nymphs. A quick internet search came up with several photos of Lychee Stink Bug nymphs (Lyramorpha rosea) that appear to me as a possible candidate. I believe the black filaments visible in both exuvia photos are likely the antennae sheds. Interesting photos…regards Karl