Mystery tiger beetle with leopard spots
Hello good people at WTB
I have a good one for you. I trapped this insect in a lindgren funnel trap baited with alpha pinene and ips trilure in Monroe County. The trap is about 15-20 feet off the ground. I have never seen this beetle before and I have done trapping for many years in Michigan. It did not come into the bait but was one of those incidental catches. First thoughts is tiger beetle but it does not seem to fit. 14 different spp. of Cicindela are know to occur in Michigan. The specimen is small (6-8mm) unlike the common tigers in MI. The attached photo was taken by our identifier James Zablotny. Great picture showing the great patterns and coloration. Should be called a leopard beetle due to the spots. I was hoping someone out there can ID this. New US, state, county record, or species?
Brian Sullivan 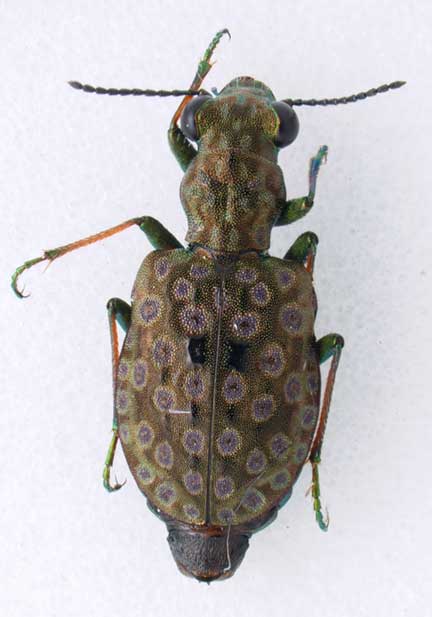 Hi Brian,
While we don’t know the name of your mystery Tiger Beetle, we hope one of our readers might be able to assist. We have called on Eric Eaton personally and we hope to have an answer for you soon. We are posting your image nice and large to better assist in the identification.

Update: (06/25/2007)
Dear WTB
Mystery Solved I was able to get an ID from our identifier it is a Marsh/Bog Ground Beetle in the Tribe Elaphrini (Elaphrus sp). Out in California you have a species that is critically endangered the Delta green ground beetle (Elaphrus viridis ). I don’t know what the species is for the beast that I have but I am sure this is a new genus for your site. Thanks
Brian Sullivan

Thanks Brian,
Should you ever get an exact species identification, please let us know. If it is a new species, we would love to be able to post the name you give to it. BugGuide has additional information on the genus, commonly known as Marsh Ground Beetles or Bog Ground Beetles.

Update (06/25/2007) From Eric Eaton:
“Great image, but it is not a tiger beetle, at least not in the truest sense. It is a ground beetle in the genus Elaphrus. They are usually found running around on mud flats and muddy margins of ponds and streams (even puddles). They are amazingly cryptic until they move. Eric”