Wasp
I emailed you once before about these humongous awesome wasps. They are still visiting us from time to time. They seem to like the passionflower vines and blossoms. I live northwest of San Antonio, Texas. If possible I’d like to have an ID on these. Thanks.
Linda Williams 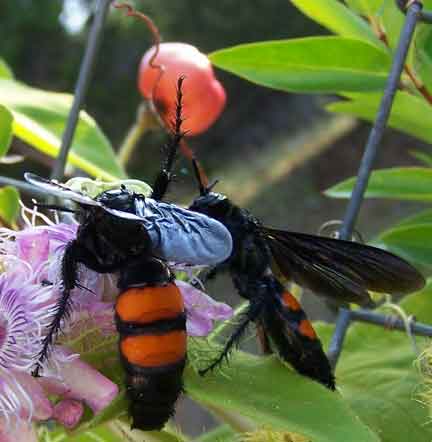 Hi Linda,
We will need additional time to research the species, but we are relatively certain this is a Scoliid Digging Wasp in the Family Scoliidae. Texas is one of the states that often makes identification more difficult because of the proximity to Mexico. Often tropical species that are not found in U.S. Guidebooks can be found in more localized areas. We will confer with Eric Eaton to see if he recognized your gorgeous wasps. Eric Eaton responded: “You are correct on both counts. I don’t recognize the scoliids to species, and actually don’t know of any specialists on that family, either. We’d love to have both the images in Bugguide, too, as we are low on Urocerus images, and I don’t think that particular scoliid is as yet represented there. Eric”

Update January 20, 2016:  Campsomeris ephippium
Thanks to a comment that just arrived, we went back to this 2006 posting and then turned to BugGuide to attempt an ID.  Seems the species Campsomeris ephippium is now represented on BugGuide, but the oldest posting there is 2008, two years after we first posted this image.  We are happy we finally have an ID on this gorgeous Flower Wasp or Mammoth Wasp or Scarab Hunter Wasp, all common names for the family members.  This species has only been reported from the southern portions of Texas and Arizona.