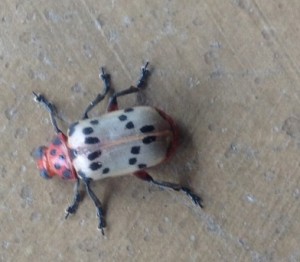 This appears to be a Scarab Beetle, but we have not had any luck with a species identification.  Your description of the antennae is consistent with Scarabs.

Correction Courtesy of Karl
Hi Daniel:
I don’t think this is a scarab beetle. I believe it is actually a variety of leaf beetle (Chrysomelidae), more specifically a flea beetle in the genus Polyclada that appears to have the common name African Leaf Beetle.  I found online references placing this genus in three different subfamilies  (Halticinae, Alticinae and Galerucinae) but the most common appears to be Alticinae.  Polyclada beetles, along with beetles in the related genus Diamphidia, are noteworthy because their larvae bioaccumulate toxins derived from the plants on which they feed. The paralyzing toxins are apparently slow acting but effective enough that the San people of the Kalahari use the fluids squeezed from the larvae to poison the tips of their hunting arrows. Several species inhabit southern Africa but I was not able to find any useful photos taken in South Africa. The best I could find was a photo identified as Polyclada sp. from Ethiopia that looks very close, an image on a postage stamp from Botswana that apparently depicts P. flexuosa (coincidentally, one of the species given as a source for arrow poison), and a fuzzy illustration of P. bohemani. I can’t be sure, but I believe this is getting close to a correct identification. Regards  Karl

Thanks so much for the corrections Karl.  We actually entertained the thought that this might be a Leaf Beetle, but the description of the antennae convinced us it must be a Scarab.  Seeing the plumose antennae on the photo from Ethiopia and the stamp from Botswana is awesome.  The information about the poison darts is also quite intriguing.  Thanks again.